~NOTE - This character is a parody of a Mary-Sue/Gary-Stu and is NOT to be taken seriously. If one of your characters is a Mary-Sue/Gary-Stu, and you are offended by this page..... well.... just leave and DON'T bother leaving a hate message on the comments section. AND IMPROVE YOUR CHARACTER.~

"Bring on the ladies~"
—Zeus on a typical day. 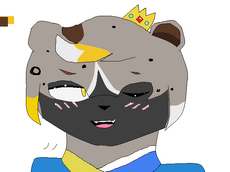 King Zeus "SparkleDeath" the Echidna, Wolf-Dog, and Jaguar hybrid of Morthal, is the son of the late king Jacob. He is a very fresh young adult, at 20 years of age. He also has many fangirls, because he's SO FREAKIN' HANDSOME!

Zeus was born on a stormy night, in the castle of King Jacob. Sadly, his mother died while giving birth to him. Throughout his childhood, he was trained by his father to use the elements he had been born with, the elements of  Ice, Flame, and Shock (Lightning). Zeus' father told him that these elements ran through the royal bloodline for generations, and that he must use them wisely, or else would would surely face his death. Of course, Zeus was a quick learner, maybe he was even better at using his powers than his own father was! This left King Jacob with awe. There was no possible way that child could best him! He began to envy his son, and one day, he took a step further. He oucasted Zeus from the kingdom, into the dangerous wilderness. But Zeus had become very strong from his powers, and knew how to use them. One day, he would return.... but not just now.

By the time he had turn seventeen, Zeus had decided to return to his kingdom.  His father had died, and there was no heir. But the citizens did not recognize Zeus, and saw him as a wandering rogue and outcast (Which he was, since the day his father outcasted him). It took them a while, but the citizens finally realized it was the heir of the throne. Now, he and his kingdom lives in peace. (Well, unless Eggman attacks, or somethin'...)

One month ago, Zeus met the love of his life, Selena Gomez. Selena and Zeus fell in love at first sight. They then got married and had one trillion children together.

Zeus is a very kind, generous, charming, and calm king. He is very flirty when near "beautiful" women, but they don't seem to mind, since he's such a hunk himself. He only seems to show extreme aggresion when someone calls him "Wolfie". Otherwise, he tries to keep his cool, even when you do get him ticked off. Slick and sly, Zeus is a very cunning, intelligent individual. He's very determined to get tasks done as quickly as possible, and never gets impatient. His chemistry with friends is always perfect, and if you don't agree then you'll probably get shot down by his archers. Did I mention you should never call him "Wolfie"? Like, EVER?

"SparkleDeath" is the most handsome being that has lived on the face of the multiverse. He has hypnotizing, amber eyes, which can seduce almost any woman into loving him. His body his quite well built, being very muscular and all, maybe even more muscular than Knuckles the Echidna himself. Zeus' snout is very Wolf-like, while he has the eye shape of that of a German shepherd's. His ears and tail are like a jaguar's, while he has an echidna's dreadlocks and four fingers, the dreadlocks being well kept. Zeus' fur is gray, brown, black, white, and orange-red, with black rosettes.

Zeus is incredibly skilled in painting, drawing, writing, juggling, gymnastics, hand-to-hand combat, cooking, baking, archery, snowboarding, sparring, and nearly every other occupation! He exelles in literally everything he does. Many Mobians envy his talents, and long for him to actually have a fault at something. But because of his sheer awesomeness and manliness, his perfection at everything retains.

Zeus was born with the powers of Ice, Flame and Shock (lightning), respectively. These three elements were passed down by his father, and are incredibly powerful and do much damage. Ice can temporarily freeze the opponent for up to 24 hours. It can also create a well-devised icy prison, which takes hours to melt, sometimes even days or weeks. Flame can scorch the opponent to embers and create a barrier of flames surrounding Zeus and/or his allies. Shock can electrocute enemies and can easily be used as a sort of torture device. Besides having mastered these three elements, Zeus can use the Chaos/Super/Hyper Emeralds to go Super, Hyper and Ultra! And he doesn't even require fifty rings in the process! He can also run faster than the speed of light, despite the fact that it's obviously impossible to do so but what the hell hedgehogs can't move at the speed of sound either! He's also about 10000000X stronger than Knuckles is, and has an IQ of 10,000 (deal with it, Vegeta!). He has the power to read minds, destroy an entire planet, ascend Nirvana and back, and bake the most savory, delicious pie known to Mobius! He also can walk on water, due to the fact that he's Jesus reincarnated. Knowing this, he can also cast out demons, cure diseases, and turn water into wine. All of his powers can instantly kill anything if he wants. His powers are badass 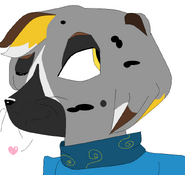 His previous design from two years ago.

Zeus' current design. (literally just rushed this thing.)
Add a photo to this gallery
Retrieved from "https://sonicfanon.fandom.com/wiki/SparkleDeath_the_EchiWolf-DogJaguar?oldid=1845135"
Community content is available under CC-BY-SA unless otherwise noted.