The author of Sparkle, considers this page to be unfinished. As such, some sections may change.

Sparkle was raised by Chris and Helen since she was a baby, and she never knew her real parents. She met her 1st friend Elie as he was sitting by himself near a fountain and they been friends since. Years later, she and Elie meet two new kids who asked them if they also have powers, to which made the new kids show them their powers. Soon, she founded her birth home and helped free it from the evil genie's control. Then soon they battle Black Mind, killed him and years later married Elie and have two kids together.

She's the caring and giving of the group,helping those who are in need. But is also brave to fight to save them.In battle, she's tough and gets right ino the action to protect her friends

She meet Elie in kendigarden while playing near a foutain and saw him controling the water. She show him her power and they both promise to keep their secret safe from the other kids. Years later, they both saved both worlds, falled in love and soon had two kids together. 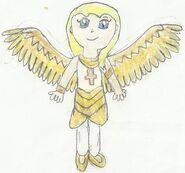 Her power up look

Adult Sparkle
Add a photo to this gallery
Retrieved from "https://sonicfanon.fandom.com/wiki/Sparkle?oldid=1696025"
Community content is available under CC-BY-SA unless otherwise noted.