Space Colony ARK was an artificial research centre orbiting Earth (or Mobius in some fanfics). It was created by Professor Gerald Robotnik as the world's first Bernal sphere and was where he lived with his granddaughter, Maria and his fellow scientists.

The Chronicles of Sonic the Hedgehog: Rise of the Heroes

The Space Colony ARK reppears in the game. This time, the ARK has been taken over by Immarius and the Gravitus and serves as one of their main bases of operations. Sonic and his friends head there with Tails' Blue Typhoon to battle the Gravitus and prevent Immarius from activating the Eclipse Cannon, ultimately saving humanity and protecting the ARK.

The Space Colony ARK is the only level in the game with 4 Acts, each taking place in different sections of it. Some of them are familiar from past levels such as The ARK and Space Gadget where the player must get passed the ARK's defense barriers.

Cosmic Crisis is the first Act of Space Colony ARK. This level takes place in the exterior part of ARK. The player starts off from a pulley and travels through the outer perimeter of the ARK. It is based on The ARK from Shadow the Hedgehog as both levels have similar pathways. There are platforms and control towers for the player to walk on. The stage is filled with mechanical rubble and Gravitus spaceships that will occassionally bombard certain areas of the ARK. You will have to destroy some of the attacking vessels and activate the ARK's defense units to create barriers. As the player progresses through the ARK, he will encounter heavily armed sections with Gravitus mechs and soldiers. G.U.N. infantry will not attack you nor will Eggman's robots. They will be on your side. In the background, you can see the Eclipse Cannon.

Relinquished Realm is the second Act of Space Colony ARK. This Act takes place in the interior part of the ARK. Much like The Doom from Shadow the Hedgehog, is is an abandoned research facility. It is so large that is resembles a labyrinth with many hallways and ruins, elevators and platforms. The player can also get to the exterior part of the ARK using elevators. Gravitus are the common enemies in this level. GUN and Egg Troops are seen battling them but will not attack the player.

Space Babylon is the third Act of Space Colony ARK. This level takes place again in the exterior part of the ARK. It is quite similar to the first Act. The player travels through the space station's platforms and towers and ends up in the Eclipse Cannon, where the Goal Ring is located, before passing through an armada of Gravitus spaceships. Throughout the level, an alarm can constantly be heard with red lights blinking through the corridors. Moreover, the player can again change gravity by touching the gravity switching devices and grind on many rails like in Final Rush. Gravitus appear as common enemies for this level.

The Apogee is the fourth Act of the Space Colony ARK. This Act takes place in both exterior and interior part of the ARK. The player's journey begins on the exterior part and ends up in the same place in Relinquished Realm. In addition, he can get access to various of the ARK's facilities such as an abandoned garden, the water reservoirs and destroyed laboratories. The player can also get to the ARK's main control room and the Computer Room. Unlike its previous Acts, which are mostly speed related, this level is mostly melee and battle against Gravitus. G.U.N. soldiers and Eggman's robots will be on your side here.

The Gravitus Dragon is a huge, three-headed purple dragon with several cybernetics. It flies around the ARK and shoots laser beams from its mouth. It is also equiped with a cannon on its back but can also use its claws to attack. To make things easier for you, the player can utilize the ARK's gun lift to shoot at it from afar. You must be careful not to damage any of the ARK's structures or defense units. When the dragon gets close enough, you can use your standard attacks to take it out. The Boss is very epic.

Shadow the Hedgehog is one of the DLC characters for Ultimate Sonic. His optional tutorial level (as well as prologue to his story) will be based on the Space Colony ARK.

Shadow's story begins the most earliest than the other characters during when Dr. Eggman begins to execute his plans. While he is an agent for GUN, his top priorities is the guardian of ARK and was there to stop an intruder. He discovered the intruder was Eggman who has stolen data for the Eclipse Cannon. Shadow returns to Earth and with GUN, tries to find out what he's is up too.

The Chronicles of Sonic the Hedgehog: I Am the Future

For Sonic, Debris Canyon is the first Act of Space Colony ARK. The stage takes place on an orange canyon while in sundown, where the Space Colony ARK has crash landed. The stage starts off from the canyons, with the ARK in the background. From there, Sonic travels to the ARK through various rails, ending up below the exterior part of the ARK, which is mostly ruins of the crash. There are multiple gorges as well. The second Act is called Fallen Colony. It starts off from the inside of the ARK, which has some recognizable sections from the previous Sonic games. It is filled with scrap metal, iron ruins and lots of Gravitus. The stage then ends up back to the exterior.

As for the Freedom Fighters' story, the stage is mostly based on Debris Canyon, where it takes place below the exterior part of the ARK. The players start off from there and at some point, they enter the interior part of the ARK, which resembles that of Shadow the Hedgehog. The stage features many Gravitus. There is a mission, where the player must destroy the Gravitus' base, which is located outside the ARK. The stage is quite long. The stage does not have a Boss for neither storylines.

The Space Colony ARK appears as an available fighting stage in the game. The player fights on top of a moving metal platform which slowly moves torwards the ARK. The platform travels around the ARK, passing through various locations of the colony including the Eclipse Cannon.

Although it does not appear as a playable stage, in game, the Space Colony ARK is referenced twice by Dimitri and is also seen in a cutscene. In the game, Dimitri reveals to Shadow that when he was younger as a cyborg, he was called up by Prof. Gerald Robotnik to help him build the Eclipse Cannon, which he did, thanks to his very large knowledge as a scientist. It is implied that back then, Dimitri was not evil and had not yet lost his senses.

The Space Colony ARK appears as one of the five Adventure Fields of the remake version of Sonic Adventure 2. This contains areas such as the capsule room, the central control room, and a computer room (not referring to a certain meme), and a large room full of shutdown projects (and it contains the tube where Shadow was created). It retains the original stages from the original game, meaning that the ARK contains stage entrances. There is an engine room which leads to Eternal Engine and Lost Colony. In the western hallway, it leads to an area surrounded by meteorites, serving as the entrances for Meteor Herd, Mad Space, and Cosmic Wall. The eastern hallway leads to a pathway which leads to Final Rush, Final Chase, and Crazy Gadget. In the Last Story, going to the central control room will lead to Cannon's Core, the final stage of the game.

From Shadow the Hedgehog

From Shadow the Hedgehog

The defense units of the ARK 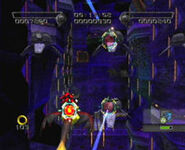 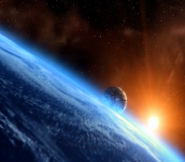 Add a photo to this gallery
Retrieved from "https://sonicfanon.fandom.com/wiki/Space_Colony_ARK?oldid=1644985"
Community content is available under CC-BY-SA unless otherwise noted.