This is an article about Soul Tyo the Mysterious, a character created by SoulTyo3 on 07/23/2015. 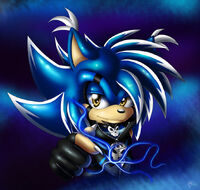 Soul's appearance has evolved from 2005-2015, his most recent appearance his that his blue fur has lighting white trim, he has 5 quills on his forhead which symbolizes a mohawk, he wears a black tee with a white skull, black cargo pants, and custom made hovershoes. he has peach muzzle with black markings going doing from his eyes down his muzzle on each side also the same above his eyes but goes no extent. his ears has wile fluff that resemble that of lynx ears, he has an extended tail which can sometimes has a mind of its own and helps Soul with hard tasks. he has black futurisitc gauntlets with sky blue that makes that blue glow. (the gauntlets resemble that of Batman's ). he has tribal tattoos across his arms. a piercing on his right ear with the numbers "890" (paying homage to the Creator's previous username "Soul890" ) and a goatee a trademark of Soul's (that also pays trademark to the creator Soul890/Soul-the-Mysterious)

Soul Tyo was born hybrid mobian child of Malikora the Hedgehog (father) and Spiral the Hedgechidna (mother) Tyo, he ancestry is from his bloodline the Heir of the Mysterious which were at war with the Unknowns who were born like the Mysterious' being hybrids. Soul grew up averagely and didn't have much love from his father who mistreated him but had a kind loving mother. as a teenager his father neglected him and his mother due to his father's constant dislike towards him. Soul went to high school and would get picked for being as quiet as a mouse while trying to focus and finish his studies, and also made some friends while being their. one day his life began to have shine when he met a hybrid just like him that helped him after getting bullied and looked at him with golden yellow eyes, sky blue fur with blue flaming trimming and very good build. they became good friends and later grew close till one day after sharing a close loving relationship as his love went into a car with uncle and fled when they celebrated their graduation to extend their lives. later on at home his and thinking about his love leaving, his mother supported him as he was sad cause out of many people she did so much for him while he was liked much by others. his father later came and mistreated his own wife leading to Soul on the defense and getting hurt himself and his father leaving again. after healing with his mother, she advised him to get some training from an elder echidna named Alkimik whom Soul went to and later trained in different fighting styles and learned his trademark element which is lightning. after his training he saw a yellow hedgehog at his home speaking with his mother about recruiting fellow mobians to be cops/freedom fighters. Soul finally came out of hiding and accept. Soul went through fight training , weapons training, and briefing while even sparring with the boss himself named Stardust Seether the Hedgehog a cosmic hedgehog mobian from another planet with overall strength and power but became limited as he became older. after training he finally began working and did well for himself, and as time went on he began doing rescue missions an made rivals. he rescued a tiger by the name of Tegra from a Metal version of himself named "Metal Soul" which was deactivated by the tiger later on. he rescued her  again from a wild wolf name Thunder who wanted Tegra for more than robbing her which lead to a battle and Soul suffering from a battle scar across his chest. he later defeated the wolf whom was never seen again after fleeing. Tegra and Soul became close but Tegra decided to fly home to the jungle to protect her village. Soul continued till years later and being experienced he was told to go to a museum where it ws a robbery. he bumped into an assassian and was surprised who it was after almost knocking them down but scractched them with a bullet his was his love Blue. they later met and she told her story about why she left and that it was a family emgency which got her into training to be what she was and she was there to take something that was gonna do harm to the city if in the wrong hands. they reconciled and later in the future had children. they have battled the liked of Mephiles the Dark and few other foes. Soul Tyo and his love Blue finally got married and had more children. as years went on the two battled more foes. and later they became grandparents but still battled a lil bit but have settled down as well. too this day from 2008-2015 Soul Tyo and his wife are alive & well and still fighting their foes.

(*) The Creator is gathering up tracks to release a tribute OST for the character Soul the Mysterious named "Hall of Revengeance" which is paying homage to Soul's highlight clips of alot of his Star Chaos Tournament wins. which is yet to surface...

(*) Soul now will be mixed with K9 after Soul now has a dog like muzzle which will add more to Soul's hybrid feature as he still looks appealing and influenced by fellow artist MartheDog's muzzle style.

(*) Soul has now appealed to some male users, however its because of pictures that involved Soul in nsfw pictures or appealing poses, it also resulted in Soul Tyo' and the creator's gender being questioned.

(*) Despite appearing in the SCT series, Soul has not appeared most of 2017.

(*) As of March 2018, Soul has come clean about his multiple relationships. However it became valid as he and his wife have been involved it swings with each other.

(*) Soul's relationships are with Tegra (Prime Setting now discontinued to avoid conflict in the MXU Universe, they have an adopted daughter named Rosy the Fox and twins TK and Aria who are Tigerhog, also Tegra & the twins are winners in the original SCT format. Aria (SCT9), TK (Tegra (SCT23) ), Hott-E (discontinued after artist left in 2007 and they also had a child but it was never revealed due the Hott-E's departure), Zabi (Soul's first bi relationship, it was in Summer 2017 and ended March 2018 due to personal issues between the two creators), Cookie/Kie (Started later on in either 2017 or 2018, Soul was living with Zabi and Kie to give them hospitality, food, and shelter along with his adopted daughter Battle the Badger, Soul was helpng Kie with her personal problems and her parents condemned Soul has a demon from the underworld. as time went on Zabi lost interest in Soul due to Soul and Kie having children who are now called Sukie and Pretzel, Sukie looks like Soul and Pretzel looks like Cookie/Kie. it was also controversy involving ownership of Cookie/Kie with The Creator of Soul winning the case and now has %100 pure ownership. Cookie/Kie has parents and a brother. the mother only as shed light. the father and mother is TBA.) Rexla which is one of Soul's favorite relationships is in a unique setting as they are in space similar to the Mass Effect series the relationship is loving, comedic, and caters to the classic japanese perv dating the tough girl that puts fear in men. despite this they click with Rexla loving Soul all together knowing despite him and tactics hes a sweetheart and also brings out the sweetheart in her. Soul wants to marry Rexla, it happens then Rexla will be Soul's 6th wife as the other 5 are Tegra, Blue, Cookie/Kie, Moon, and Sindy. in the end all Soul has to do is pay the cub support but thats covered with his tournament and freedom fighter income money. Another is Carerin the Cat where they have 3 children..Surin, Sion, and Pistol (as of this writing, the CarerinXSoul couple is over but since The Creator of Soul has created Surin, Sion, and Pistol..they can still have a place to exist. Soul has met another char named 'Sindy the Cow' and as of June 26, 2020 They are happily married making Sindy, Soul's 6th Wife. Soul married to an assassin named Moon as well where they have a child named 'Crescent the Hybrid'. He is currently in a relationship with Juicy and if she marries Soul she could be Soul's 7th wife. He was also involved in a relationship with Maleena (now as of today by Soul and the same stuff for Tegra is the same happening with her and probably Hott-E as well.) All gals Soul has been in a relationship/married..Tegra the Tiger, Hott-E the Hedgehog, Maleena the Cat, Blue The Unknown (Current/Official wife due to the longevity of the couple), Rexla the Hedgehog, Cookie 'Kie' The Wolf, Carerin the Cat, Moon the Hybrid, Sindy the Cow, and Juicy (species undefined)

(*) Soul has made a new team with Comet the Dog owned by ColorfulSilver and has been dubbed Team Vital-Metorite , the team name is based of synonyms of their names.

(*) Soul has declared Percey the Dog as his first s*ut slave owned by SissyPercey from Inkbunny and Furaffinity (as of 2020 this is no longer as thing do to lack of contact..)

(*) Soul is seen as a celeb cause of his Freedom Fighter, Tournament and Championships wins in the SonicXWrestling series 'Star Chaos Tournament' , and being the face of the Chaos Universe, MysteriousXUnknown w/ Blue the Unknown

(*) In 2020, Soul has went under a redesign done by XenoStateofMind and is so far detailed like Soul's 2019 design.

(*) As of 2020, Soul hasn't made many appearances cause of SoulXBlue not surfacing anymore do to Blue's creator being stuck on Sans from Undertale which has become lackluster with lack of characters and storytelling and too much focus on Sans and her character version of herself... doing the two-character rp format.

Retrieved from "https://sonicfanon.fandom.com/wiki/Soul_the_Mysterious?oldid=1875250"
Community content is available under CC-BY-SA unless otherwise noted.