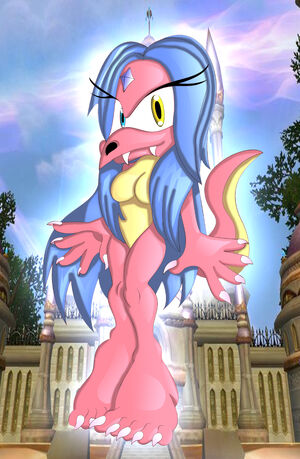 Sophia the Dovahkin is a member of the Dovahkin Tribe and one of its advanced sorcerers. A kind, caring yet rather ditsy and outgoing dragon she enjoys the happy-go-lucky life and tends to be rather hyperactive. Powerful her magic is even when compared to the advanced disciples of other magical disciplines, she tends to use weaker spells to greater affect rather than burst towards stronger spells.

Sophia was born into the Dovahkin Tribe years before Eggman began to attack the vicinities around South Island, including the Dovahkin's homeland south of Angel Island's mainland. While she was just a newborn whelp her parents fought off against Eggman's robots. Despite the threat being driven away, Sophia's parents passed away after the invasion. While no one else was killed or captured, her parents had to use their life-forces to drive them away.

Orphaned and not knowing who her real parents were Sophia was raised by one of the Sorcerer Elders. Her magic was strong, powerful and quickly mastered. Over the course of her years she began to be taught better, stronger, more effective arcane spells. In due time she became strong enough to be given an official rank of Apprentice and was enrolled in the magics academy of sorcery.

Aspiring to become stronger but never letting her personal, outgoing life be overwhelmed by her studious attitude Sophia kept impressing her teachers and her adoptive father Elder, to the point where, under the Elder's interjection, became a Moderate Sorcerer, although she was strong enough to effectively become Advanced; although her spells were strong she could not display the ability to perform a single 5th level spell required by Advanced Sorcerers.

Sophia is a large combination of studious yet easygoing; she enjoys partying, clubbing, going out, meeting people and just adventuring around the areas of South Island, but she know when and where she needs to stop and continue on with her training. When studying she is considerably serious, not wanting anyone to disrupt her and even more hostile to those who do not respect her training.

She enjoys good humor and more often than not would use her magic to play tricks or prank people, such as shrinking them, making them walk into invisible walls, such and such. However she is very empathetic of people's feelings and knows when to stop her antics before they go too far.

Cantrips, or 0 level spells, are minor abilities that a sorcerer must learn and master before they can be given the rank of Apprentice. Cantrips have infinite uses due to taking up such miniscule amount of power, but are needed to show that they have the ability to manipulate the energy needed for other sorcerer spells.

A sorcerer imitates a sound with a mix of evocation energy and illusion energy, and propels that sound with 100 feet. Ghost sound is a good ability to use to confuse or to trick an opponent.

Light is an ability where the sorcerer touches an object, no matter how big or small, which emanates a large glow of light 20 feet in diameter. The light lasts under it is destroyed or the magic effect is dispelled.

The sorcerer uses his arcane powers to create a figure of a hand no larger than their own hand size, which can be used to move, pick up or otherwise manipulate objects no heavier than 20 lbs. The Mage Hand remains active until either cancelled or moves 50 feet away from the caster.

By manipulating matter the sorcerer can use their powers to mend minor damage to an object that isn't organic or living, such as a chipped sword, a torn robe, or a ripped book page. Anything mended retains its original appearance, such as engraving or writings, unless those elements are magical, in which case they are not replaced.

The sorcerer gains the ability to read and decipher any form of magical text, such as runes, scrolls, tomes and lecterns. It is also the key ability used when learning new spells, as spells are presented to sorcerers via scrolls.

A set of low level, beginner spells, 1st level spells are learned by Apprentice sorcerers when they have mastered the six Cantrips.

Color Spray is a powerful spell that unleashes a stream of multiple colors, and as the spell grows stronger it gains more colors. Each color in the spray indicates it gains a certain effect, able to put enemies to sleep, paralyse etc but also deals damage. The more the caster trains in this spell the stronger the damage and more effects it can produce. The length of this attack grows by 10 feet per rank and gains additional effects per rank, as well as gaining damage based on its trained rank.

By invoking the nether and the use of their own arcane powers, a sorcerer can summon a small familiar that stands no more than a foot high, taking on the form of a small, elf-like imp. These creature are timid, physically weak and frail, although they are able to launch small arcane orbs that have a fixed D rank damage. Though not normally used for combat, familiars are usually used as scouts, assistants or servants. This spell can summon up to one familiar at a time, plus one more for each time retrained. Familiars last until dismissed.

A sorcerer learns this spell around mid way through their apprentice training, allowing them to create any non-magical creature, although it is rumored that masters of this spell are able to bypass this restriction. The size of the animal is of a fixed size but with each rank gained the animal can become larger upon creation by 3 feet per rank on top of its normal size. A creature's damage is equal to the trained rank of this spell. As the user trains this spell, more powerful, advanced creatures can be created.

A spell that allows the caster to notice secret elements to his surroundings, such as secret doors, switches, compartments, drawers, etc. The spell is able to be cast once plus once more per times trained, and each use lasts for one hour.

Magic is a sorcerer's best domain, and training in the spell makes them masterful in the art of identifying items. A caster is able to identify an item's magical properties just by examining it with their eyes and, if beginners, by running their hands over the item. A sorcerer is able to identify one item plus one more item each time retrained in a single day.

The sorcerer uses this ability in order to block any incoming projectile or attack, deflecting it or knocking it away. The shield is able to block attacks or equal to or less rank equal to their highest spell level equivilent. A sorcerer can use this spell once per day plus once more per times retrained.

A small, hovering disk five feet in diameter that floats three feet above a solid surface that is used to carry items. The caster can command the disk to move wherever they designate. When first trained the disk is able to hold up to 150lbs, plus 50 lbs more per times retrained. The disk lasts until the caster dismisses it or it travels further than 50 feet away from the caster.

Retrieved from "https://sonicfanon.fandom.com/wiki/Sophia_the_Dovahkin?oldid=1800595"
Community content is available under CC-BY-SA unless otherwise noted.