Sonic the Hedgehog is the son of Batula the Hedgebat and Queen Aleena Hedgehog, and the brother of Sonia and Manic. 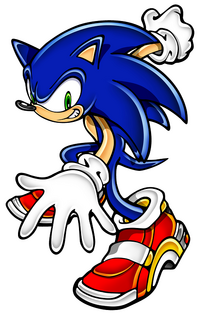 His friends and family

Spending time with his friends

Having time for himself

Messing with his enemies

His friends in danger or being threatened

Dr. Eggman and his robots (in general)

Amy getting angry or brings out her hammer

Being Impersonated and/or having though to have turned evil

Having to give up or run away from a battle

Super Strength (To an extent)

Sonic the Hedgehog, along with his siblings, Manic and Sonia, to Queen Aleena, and Batula the Hedgebat, though at the time, their father was unknown.

When Sonic was nine years old, his mother had mysteriously gone missing. Her advisor, Joseph T. Marley had agreed to rule Mobius in her place until her hopeful return. Sonic and his siblings set off on an adventure, in hopes to find their missing mother.

Sonic was given a pair of Super Sneakers that would increase his speed. However, while testing it, the power had fused with the Chaos Emeralds that Robotnik had stowed away for safe keeping, and a rotten egg in a nearby fridge. Sonic had gone so fast that not only did he break the sound barrier, but he turned himself blue, Manic green, and Sonia into an eggplant color. From that same explosion, Robotnik's DNA had fused with the egg, turning him into the infamous Dr. Eggman. The three siblings fled from the scene soon after being attacked by the crazed and newly evil scientist.

The first part of Chapter 1 is taken from Sonic's point of view, but it is written in second-person narration. He is first seen sitting on a hill, enjoying the natural scenery around him. After a few moments he gets bored, and considers going running, but then decides he wants to do something else instead. An unknown object flies in his face, and he panics, running around in circles in an attempt to get it off. He runs into a tree, and falls down, dazed. The object is then revealed to be a poster, advertising a chili-dog eating contest at Future City Park, with a reward of five-hundred rings for whoever wins. He checks a watch he had been keeping on his wrist, though hidden underneath his glove, showing the contest would start in fifteen minutes, and he rests against a tree, thinking he has plenty of time.

Later, he arrives at Future City Park, and walks up to the sign-up table, where Charmy greets him, and hands him a clipboard with a sign-up sheet on it, and a black pen. Sonic asks Charmy if he should be in school, but Charmy informs him that he had been paid ten rings to skip that day, and tells Sonic not to tell Vector or his uncle, Jerome. Sonic fills out the sign-up sheet, and begins to walk towards the table where the contest takes place, but Charmy calls him, and tells him he forgot to tell him that the admittance fee was five rings. Sonic tries to convince Charmy to let him in for free, and in return, Vector and Jerome would not know about his truancy. Charmy accuses him of highway-robbery, but reluctantly lets him enter the contest for free.

Sonic walks over to the table where the contest takes place, sitting next to a purple, morbidly obese cat. He stares at her for a moment, and then she growls, asking him what he is looking at. Dylan, one of the judges, then comes up onto a small stage in front  of the table, and goes over the rules. By the time he gets to the dangers, Sonic tunes him out, just wanting to eat the chili-dogs. He reaches for one, but then Dylan announces he forgot to mention that anyone who eats a chili-dog before the contest begins is disqualified, and then looks over at Sonic, and tells him to put the chili-dog down, calling him "blue guy".

The contest begins, and Sonic hears one of the judges comments her concern, wondering if contestant number nine is even chewing her food. Sonic looks at the cat next to him, and notices she is not even using the techniques that the other contestants are, and sees it only takes her a few bites to finish a chili dog. When the contest is a few minutes from ending, and Sonic is almost done with his plate, he hears his competitor express confusion and frustration, that the chili-dogs were gone. Dylan announces the contest will have to end a few minutes early, and Sonic's competitor is revealed to be the winner. Rouge and Amy, revealed to be the other two judges, Amy revealing that his competitor was Blaze.

Sonic bursts out laughing commenting that Blaze has let herself go. Blaze comments that she may have put on a bit  of weight since her return from the Sol Dimension, but she did not think it was noticable. Dylan announces she can come up to the stage to recieve her prize, five hundred rings. Sonic continues to laugh as Blaze waddles up to the stage, for she cannot keep a normal gait. Dylan congratulates her, and Blaze tells him honestly that she was not in it for the money. Sonic notes she sounds sad, probably because "she's not as awesome as she used to be".

Sonic appears briefly in the second part of Chapter 1, when he is seen trying to pull himself up on the stool, still laughing about Blaze's weight gain. Charmy is tempted to kick him in the back of the head for being so mean, he gives second thoughts to it, and decides to leave him alone.

Sonic seems to generally retain the same personality as his canon counterpart, but there are some differences worth noting.

Sonic prefers to live life according to his own rules, and not to those around him, and always looks forward to new adventures, and never holds onto the past.

Although relaxed and easygoing most of the time, he has a generally short temper, and can sometimes act recklessly, which gets him into trouble.

He depises evil, no matter what form it may come in. Usually he will thrill-seek when fighting a villain for fun, but when crisis hits and the matter becomes serious, he will focus intensely.

Sonic tends to be cocky, quick-witted, and over-confident, and is immodest in general, but can also be a gentleman, and prefers to be called by his nickname, and not his real or full name.

He is very loyal to his friends, and is even willing to sacrafice himself for them at times, even though he can occasionally be rude towards them.

Sonic is very proud, and seldom gives up unless he has to. However, he will accept help from friends if offered.

He can be insightful, sometimes more than he lets on, sometimes changing the perspective of others Sonic has a love for scenic nature, and it angers him when people pollute them.

Sonic is shown to be a bit more romantic than his canon counterpart, shown through some interactions with Amy.

Sonic seems to be somewhat manipulative in this universe, even occasionally shown to use bribery to get what he wants. One example is when he convinces Charmy to let him into a chili-dog-eating contest for free, in return that his truancy from school would be kept a secret from Vector and Jerome.

Sonic is a bit meaner in this universe. One example of this was when he was laughing at Blaze when he found out she had become morbidly obese.

Sonic is well-known for his speed, being able to run at the speed of sound. It is possible he inheirited this trait from his father, Batula. He also has incredibly fast reflexes, making him easily dodge an attack.

While Sonic isn't quite as strong as the other characters in the series (i.e. Knuckles, Shadow), he displays some degree of superhuman strength, sometimes being able to carry things as large as he is without slowing himself down.

Sonic is also very durable, sometimes even surviving falls from space, and merely shaking it off.

Sonic has a strong sense of will, and only very seldom surrenders.

He can harness the power of the Chaos Emeralds, and turn himself into Super Sonic.

While he does not usually use weapons while fighting, he is skilled in swordsmanship.

He can roll into a tight ball for protection

So far, Sonic's only known weakness is his Hydrophobia, his fear of water. This was due to nearly drowning at a young age when his mother tried to teach him how to swim.

Retrieved from "https://sonicfanon.fandom.com/wiki/Sonic_the_Hedgehog_(IncaIceBunny%27s_Universe)?oldid=1838132"
Community content is available under CC-BY-SA unless otherwise noted.