Sonic was born on South Island (as oppose to Christmas Island in the main canon) under the legal name of Sonic the Hedgehog (originally planned to be Olgivie Maurice Hedgehog, but not implemented due to a pending lawsuit with Ken Penders). He used to live a carefree life until the evil Dr. Eggman attacked his home and brought the abducted Miles "Tails" Prower from West Side Island to his home island. After freeing Tails, the two decided to team up and stop Eggman's nefarious plans wherever he may strike. They have been best friends since that day. He is also a big fan of chili dogs, which has been a running gag in all Sonic the Hedgehog franchises since the '90s.

In the first game of the reboot, Sonic, released on Cyclone Vortex and Cyclone Tempest with a few differences between the 2 games, the story remains the same. Sonic and Eggman meet for the first time when Sonic realizes the forest's creatures are being put in Eggman's badnik army. Already planning to go after Eggman, the mad doctor put the icing on the cake when he reveals he captured a two tailed fox from West Side Island. Sonic goes on a journey to rescue Tails and put a stop to Eggman's plan.

Sonic is a bit of a mixed bag. He is usually a laid back goofball that likes to make jokes, play games with his friends, and refers to himself as the way past cool dude with an attitude. However, in times where it is needed, he can be serious, especially when his friends or his world is in danger.

Super Sonic: When Sonic collects all 7 Chaos Emeralds and 50 rings, he can become the all powerful legendary Super Sonic. His fur turns yellow, his spines curl up, and he is nearly invincible. 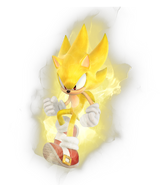