Start a Wiki
This is an article about Sonic the Hedgehog (Crimson Flame Continuity), a character created by CrimsonFlame2K on 09/7/2018.
Sonic 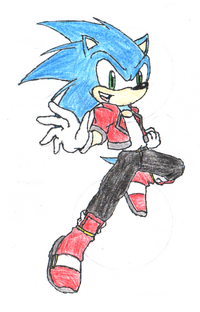 It's been a long time since the three of us got together like this! I kinda miss it.

— Sonic to Tails and Knuckles, Clash of Mythics: Genesis

Heh. That's some impressive smack talk for someone who hasn’t tangled with the Egghead! Pretty snazzy performance there, if you ask me.

— Sonic commending Bianca's determination, Sonic: Stage 1 - (Un)Ceremonious Arrival
The blue dude with the ‘tude is back in town and ready for some action! Sonic the Hedgehog is a major character in the Clash of Mythics series, in which he appears as one of the many playable fighters in the roster, beginning with Clash of Mythics: Genesis, the first installment of the series.

He is also one of the central protagonists of Rage Against the Empire, a fanfic adaptation of Sonic Forces taking place over a decade before the series proper in which he is defeated by the mysterious Infinite and has been a prisoner for the Eggman Empire for the last six months before breaking out of captivity and joining the Rebellion of Blue in the last few days of the global war.

He fulfills the same role in Flames of Fate and Destined Dark, which adapts the events of Sonic the Hedgehog (2006) in which he finds himself caught in the crossfire in a conflict between Dr. Eggman and the royal family of Soleanna regarding a destructive force known as the "Flames of Disaster".

Sonic is a Mobian hedgehog that stands at an average height of five feet, three inches with a slim but otherwise well-toned body with spines and fur that take on a dominantly blue coloration. Meanwhile, the skin on his muzzle, arms and hands, torso area, and inner ears are colored light tan, and his eyes sport an emerald green hue. His signature spines are ordered in in rows of three behind his head and are all pointing downwards, while two smaller spines can be seen on his back, and a long black nose can be seen at the center of his muzzle.

In terms of attire, he retains his pair of white cuffed gloves - though, they now sport red tongue accents on the cuffs as well as golden wristbands that serve to tighten them in place. Meanwhile, he gains a few new additions to his look, consisting of a red short-sleeved jacket and grey accents and sleeve cuffs, in addition to a plain white tank top shirt underneath.

He also sports a pair of black pants, the lower legs of which are tucked into a pair of bright red boots that resemble his old Power Sneakers, down to having a white strap with a golden buckle on the outside of each boot. The also sport cuffs similar to the ones in his gloves, including the golden wristband.

Sonic is generally the same, carefree speedster everyone knows and loves. A heroic individual who loves freedom and justice as much as he hates evil, he always stands up for those who can't stand for themselves and will adamantly fight for what he believes to be right, no matter what anyone else says. Meanwhile, he also possesses much self-confidence with a healthy ego to match. Though notably more mature and somewhat wiser than he was in his younger days, Sonic is still rather impatient to an extent and - when it comes down to it - will opt to leap into action at a moment’s notice, especially in particularly dire situations.

The blue hedgehog is also a great friend to have around, in spite of his flaws. The numerous friends and rivals he has made over several years have given him a lot more to fight for beyond his own innermost desires for an exciting adventure, and will fight like hell to protect them at any cost, including his own well-being. In addition, he also sports a hidden but profound wisdom in the form of genuinely-helpful advice, which he is more than willing to give in any situation where it is needed.

Unfortunately for him, he did not make it all the way too adulthood without stumbling along the way. His torturous experiences during his six month-long period of captivity several years ago at the hands of his late arch-nemesis, Dr. Eggman, and the now-deceased Infinite have completely rendered him traumatized, as much as he doesn’t want to admit it. Several years of constantly ignoring that trauma - all in an effort to keep his friends from worrying - have begun biting him right in the ass and led him to developing Post-Traumatic Stress Disorder as a result. In addition, the state of his relationship with Amy in particular has been less-than-stellar for undisclosed reasons as of late...

Regardless of his current troubles, Sonic will always make an effort to help his friends and allies out, no matter what happens, and is still the same hedgehog with his "get it done" attitude and the will to stick to his guns ‘till the bitter end.

Sonic has his trademark super speed, as expected of someone touted to be the fastest thing alive. Able to move at up to speeds capable of breaking the sound barrier, he can easily leave plenty of others in the dust without even trying. To go with his incredible speed, Sonic also sports impressive reflexes and reaction time, allowing him to avoid a variety of obstacles with quick and precise movements with almost no decrease in speed in the slightest. He also sports great dexterity, allowing him to perform complex maneuvers - primarily in the form of dazzling airborne stunts, and retains a lot of his trademark moves, including the Homing Attack and Spin Attack, among several others.

Meanwhile, years of experience with the Chaos Emeralds and their energy have allowed Sonic to develop a few techniques that utilize the latter. While many of them merely enhance his natural capabilities, his most notable techniques are the Sonic Wind, a vortex that ensnares its target into one spot for a brief moment, the Sonic Wave, a rapidly-hitting wave of energy fired off by spinning at high speeds, as well as its aerial variant, the Sonic Storm.

Other notable techniques in his skill set include the Blue Streak, an agile leaping somersault, the Windmill, a rushing attack where he twirls his leg like a tornado, the High Flying Groove, an airborne attack where he swiftly dives down at an angle before leaping upwards, and Let 'er Rip!, in which he grabs the opponent before tossing them into the ground and savagely ripping them a new one with a well-placed Spin Attack on top of their downed bodies.

Sonic also possesses a transformed state commonly referred to as Super Sonic. It is activated by the seven Chaos Emeralds and having sufficient energy in store, such as the energy given off by having at least fifty Rings. In this form, Sonic's abilities are drastically enhanced, allowing him to move faster, hit harder, fly at supersonic speeds, and use Chaos Control and his other Chaos-related techniques to a much greater extent. However, he has recently made it a habit to refrain from entering this form, preferring his natural speed and agility.

Attack: 7 - Despite not having as much bulk as Knuckles, among others, Sonic is actually quite strong in his own right and can tangle with the best of them in a fistfight if need be.

Defense: 6 - Though he isn't as durable as some may believe, Sonic is perfectly capable of fighting defensively if need be, since his speed will allow him to back off at a moments notice.

Speed: 10 - As the "Fastest Thing Alive", Sonic is unsurprisingly the fastest character of the entire roster bar-none, with Shadow being his only rival in this regard.

Magic: 4 - Perhaps one of his weaker aspects, Sonic actually doesn't have much in the field of supernatural powers beyond his incredible speed and ability to manipulate Chaos Energy, the latter of which he is far outclassed at by others.

Evasion: 8 - To match with his nigh-unmatched speed, Sonic is also one of the most agile and dexterous characters in the roster as well, given how he is able to perform incredible stunts while still in motion.

Intelligence: 6 - Despite being quite headstrong and impatient, Sonic is quite adept at coming up with combat strategies on the fly, mostly thanks to his quick-thinking. In addition, he can also recognize when a situation has become too rough for even him to handle - at least, not without a plan.

Skills: 8 - Years of experience in battle have honed Sonic's fighting skills quite finely, given his development of several techniques that make use of his natural speed and agility.

Accuracy: 8 - Sonic sports impressive aim and accuracy with some of his techniques, most notably his Homing Attack, among others.

Stamina: 9 - Sonic rarely ever tires himself out and can keep himself in the fight for an insanely long time, provided the enemy doesn't beat him to a pulp.

Tolerance: 8 - Though not exactly the most durable in a fight, Sonic is still more than capable of resisting any pain resulting from most injuries he receives.

As most people should be aware of by now, Sonic has a notable lack of any ability or skill in swimming. In most situations, he sinks like a rock in water, and - naturally - can only breathe underwater for a limited time before having to seek additional air, which is often a rather stressful ordeal. Thankfully, he has found ways to circumvent this problem through various means over the years.

Another one of his weaknesses is his apparent status as a Fragile Speedster - with some shades of Glass Cannon thrown in. While he is able to plow through several enemies rather quickly, is actually pretty strong, and has somehow survived falls from great heights on a fair number of occasions, Sonic is actually far from being as durable as some might have come to believe. As a result, he can end up getting hurt a lot more in an actual fight and must make sure his opponents can't even touch him.

Meanwhile, there’s his apparent case of Post-Traumatic Stress Disorder. As mentioned earlier, Sonic’s six month of captivity did leave a mark on him, and he still has occasional episodes where his mental state becomes rather unstable, if only briefly. In the middle of a fight, this can prove to be quite dangerous for the Blue Blur.

Retrieved from "https://sonicfanon.fandom.com/wiki/Sonic_the_Hedgehog_(Crimson_Flame_Continuity)?oldid=1857437"
Community content is available under CC-BY-SA unless otherwise noted.