The author of Sonic the Hedgehog (Clairebear165's Universe) considers this page to be unfinished. As such, some sections may change.

This is an article about Sonic the Hedgehog (Clairebear165's Universe), a character created by Clairebear165 on 03/3/2016. 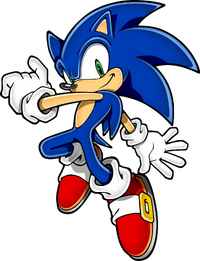 Sonic is described as a blue furred green-eyed hedgehog. The inside of his ears, chest, muzzle, and arms are peach. He wears white gloves and red shoes with white straps, cuffs, and gold buckles.

Sonic is described as "being like the wind," always looking for a new adventure. He is cocky, sassy, quick-witted, and maybe overconfident sometimes. He is loyal to his friends, always wanting to keep them safe from harm. Sonic doesn't like staying in one place to long or being coped up in a room.

Sonic, like his father, is able to run faster than the speed of sound. No one really knows how fast this blue hedgehog can run, but Tails is still speculating on that.

Sonic has enhanced reflexes. Also being able to run at supersonic speeds, he has a near infinite amount of stamina.

Sonic's most notable skill is being able to curl into a tight ball and preform what is called a "Spin Dash" or "Homing Attack."

Sonic, unlike his father, can't swim. He starts to panic if this hedgehog finds himself in water chest-deep. If Sonic accidentally falls into water which is deeper than that, he is in deep trouble, literally.

Retrieved from "https://sonicfanon.fandom.com/wiki/Sonic_the_Hedgehog_(Clairebear165%27s_Universe)?oldid=1696462"
Community content is available under CC-BY-SA unless otherwise noted.