Start a Wiki
This is an article about Sonic the Hedgehog/UPgraded's Universe, a character created by UPgraded on 12/20/2015.

The author of Sonic the Hedgehog/UPgraded's Universe considers this page to be unfinished. As such, some sections may change.

Sonic retains most of the appearance from his main series counterpart, but has a few physical and clothing differences. He is much slimmer, with longer arms and legs and more pronounced shoulders, giving him a lanky appearance. His hands are also noticeably smaller. Sonic's quills are also slightly messier, having some cowlick-like spikes that sticks out from his top and lower quills, and his arms are covered in blue fur, as opposed to being skin-colored.

For attire, Sonic wears a pair of white gloves with cuffs and a pair of red sneakers, which have white cuffs, grey soles, and a large, rectangular gold buckle on the top. Both of his gloves and sneakers have white sports tape around them, which is wrapped around his palms, the lower half of his arms and legs, and the heels of his sneakers. Finally, he sports a short brown neckerchief around his neck.

Sonic is fast, blunt, and concerned with looking "cool." He can often be found napping under or near a tree, practicing a new trick, or actually doing his job of maintaining Mobius' peace. However, he can be extremely boastful at times, mischeiveious and very rude, despite that , he is quite loyal and kind and always comes through for his friends. He also tries his best to reach his goals without giving up.

Not much was known about Sonic before the story. Sonic was born on Christmas Island with the ability to run at high speeds. At one point in his life, he met Dr. Eggman and declared him his arch enemy after Sonic heard about the terrible things Ivo had been doing to his family and friends.

At the age of 3, Sonic began attending a daycare. Nothing too important happened excluding the fact Amy began to take notice of him. When Sonic was 8, he was strolling through the daycare park even though the daycare had been closed due to heavy snowfall, then right out of the blue (Pun intended), he heard a booming explosion. He figured the cause was Eggman, but it wasn't. It was a little boy named Miles who's creation had malfunctioned and exploded. His class bullies were there to witness it and began laughing which caused Sonic to berate them. However, the bullies resorted to physical violence and pulled a knife at Sonic. Before they could attack, he swiftly wounded all three bullies and took Miles to a hospital. They became friends afterwards.

At another time, he almost drowned in the sea after his leg became stuck in the middle of two branches, which spawned his fear of water

Sonic knew that just the few furries that fought for Mobius would eventually need extra help, due to Eggmans growing authority, so he decided to form a group called "Rebels United". Despite being the creator of the group, he entitled Sally Acorn to be the Cheif Executive Officer (CEO) of the association.

After about 8 months, Sally and Knuckles brother, Knux, had pinpointed Eggmans Vehicle Manufacturing Fortress and planned an attack on the stronghold. The Rebels sent to fight were: Sonic the Hedgehog, Tails,  Ericius the Hedgehog , Harimogura the Echidna , Lapin the Rabbit , Cetus the Shark , Spring the Dog , Micheal the Bat , Igel the Echidna ,Kuma the Bear , and Bengy the Hedgehog. Sonic prepared by equipping his Shortsword and ran, like usual. He also, along with Amy, trained Ericius, Lapin, and Cetus before the mission began. Sonic asked Tails to make a communicator device, however, since it was so "last minute", Tails was unable to, this forced Sonic to complain. Sonic and his team went through the many mountains and cities until they saw the huge fortress that led to their doom.

Sonic punch, kicked, spin dashed, and spin attacked the guards and robots. They finally were atleast 30 feet from the gate, until Sonic saw Eggman wire up a Turret aiming towards his allies, he then signalled Ericius and Lapin to move out of the way, but they were to late. They were both shot and killed. He then turned towards Tails and fired at the tornado. The aircraft eventually caught fire and became unstable and crashed into a mountain and was presumed dead. Sonic, angered by this, ran towards Eggman and destroyed multiple AI Robotic Guards and pillars in the process. Eggman taunted Sonic, because the angrier Sonic got, the faster he would run. Sonic finally hit the force field that protected Eggman and due to the extreme amount of speed he ran into it at, he fainted.

He woke up to see a cage with electrical beams instead of bars, which could eventually kill him. He was then met by a guard with a crossbow in her hand. The girl, with no words, shot him with the tranquilizer and the next thing he knew, he was strapped in a table with all kinds of tubes and tools surrounding him. He found he couldn't move and had trouble staying awake, he was being drained of his own energy.    ......TBA

Despite being a hedgehog, Sonic cannot swim. He is also very scared of water, this is because of an incident that occured sometime before the first book in which he almost drowned in the sea during a family vacation. He has also shown signs of grief whilst seeing another person cry when sad. This especially affects him when he is rescuing injured children, mostly because they cry ALOT. 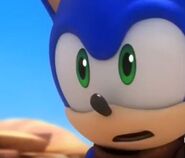 Retrieved from "https://sonicfanon.fandom.com/wiki/Sonic_the_Hedgehog/UPgraded%27s_Universe?oldid=1867482"
Community content is available under CC-BY-SA unless otherwise noted.