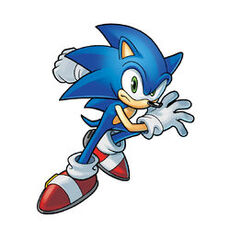 The author of Sonic the Hedgehog/Sonic Override considers this page to be unfinished. As such, some sections may change.

Sonic The Hedgehog (born Maurice Olgilvie The Hedgehog) is the main protagonist of the Sonic Override universe. He is the son of Jules and Bernadette Hedgehog, and is considered by many to be the hero of Mobius who has helped protect what little freedom many of its inhabitants have left with the Knothole Freedom Fighters since childhood, defeating his arch-enemy, Dr. Ivo "Eggman" Robotnik, time and time again. His life is one which is filled with many trials. During his heroic career, he has earned many titles and friends, alongside many a foe.

Sonic was born on day 162 of the year 2180, before the Great War, to Jules and Bernadette Hedgehog in Sunrise Gate Zone. While his parents originally named him after his grandfathers, "Maurice" quickly picked up the nickname of Sonic, due to his unnatural speed.

It's on Christmas Island that Sonic first met Mighty and Ray, whom became close friends of the Blue Blur.

When the Great War began, Jules and Bernadette were drafted, leaving Sonic with nowhere to live on Christmas Island. As a result, he moved to live with his uncle, Chuck, to Mobotropolis. This is when Sonic first met Sally Acorn, on one of Chuck's regular visits to Palace Acorn.

In 2187, the Great War ended, allowing Sonic to return to Christmas Island, however, Jules and Bernadette relocated to Mobotropolis instead.

When Sonic was just 7, the Technoric coup occured, forcing Sonic to flee. While Sonic got away, the rest of his family was captured, some of which were roboticized. He, alongside many others, fled to Knothole Village in the Wood Zone. This is when Sonic first met Tails, Antoine, Rotor, and Bunnie. They would go on to form the Knothole Freedom Fighters.

Between the years of 2189, when the Original Freedom Fighters were betrayed, and 2192, Sonic and the others struck back against the Technoric Empire in small successes. This was by using guerrilla tactics and espionage to ruin many a scheme by the doctor. One early mission had Sonic breaking into one of Robotnik's slave labor camps; it's here where he found his old friends, Mighty and Ray, and rescued them.

Retrieved from "https://sonicfanon.fandom.com/wiki/Sonic_the_Hedgehog/Sonic_Override?oldid=1867480"
Community content is available under CC-BY-SA unless otherwise noted.