Start a Wiki
This is an article about Sonic the Hedgehog/Mobius Redrawn, a character created by Konnichiku on 07/19/2015. 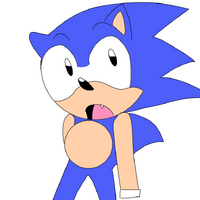 Sonic the Hedgehog is a 10-year-old hedgehog who serves as the protagonist of most of the Mobius Redrawn stories. He lives in Station Square.

Sonic is a blue hedgehog with black eyes and sometimes a single white fang. He has a peach-colored muzzle and stomach and wears red shoes with white stripes on them. He also wears white gloves.

Sonic is a hip, laid-back, radical hedgehog who is always on the latest trends and slang; he's also very lazy. Originally, he didn't feel self-confident and cried if you made fun of him enough; this changed when he got his new power. It took a while for him to adjust to his superspeed, he kept falling and walking into walls at first. He has a crush on his babysitter Madonna. Besides her and his female friends, all girls have cooties to him. (He later becomes chaste.) But he generally tries to be friendly.

Sonic hates slow speeds and boredom. He's also terrified of swimming in water thanks to a bad experience of drowning when he was younger. He is commonly found hanging out at the arcade, where he has the high score on Alien Syndrome. He is nervous when he has to go on stage, mostly exposed when he tours with his band. He also sometimes rides in the tumble dryer in his house's laundry room and talks dirty on the phone. (He doesn't know what that means.) Despite being 10, he still watches shows like Sesame Street, loves Disney World, and thinks the Nick Jr. cartoons are awesome (though that's because they're anime.)

Even though he tries to stay current, Sonic has a secret love of bands like The Beatles and Queen, and people who know about this call him "Grandpa."

Sonic was born in 1981 on Christmas Island, moving to Mobius shortly after. He was named so because his mother Berdanette, growing up in the 50s, thought the 80s were going to be like her idyllic view of the future. At the age of ten, after a bad day at school, he tripped over a barrel of toxic waste, leaving him with super speed. He also got a career as a pop star, which he accepted. However, he has stage fright a lot. Because of his career and his powers, Berdanette had to contact a social worker in hopes of having him adopted; but she was turned down.

After gathering all 7 Chaos Emeralds, Sonic was exposed to radiation from them that entered his body. When he collects all emeralds now, he can use that energy to become Super Sonic. If he collects the Super Emeralds, he can become Hyper Sonic. Some other forms are Dark Sonic, Darkspine Sonic, and Phantom Sonic; the last of which was granted by the Darkling Emeralds. Prism Sonic became possible thanks to the Rainbow Emeralds Fiona Fox and Rosy the Rascal collected. For a while, whenever it turned nighttime, Sonic transformed into a Werehog, thanks to Dr. Robotnik.

Sonic can run at the speed of sound/light due to toxic chemicals fusing with his cells, as noted before.

Sonic has fast reflexes thanks to running at the speed of sound all the time, has a black belt in karate, can sing good, and likes to skate on his skateboard.

Sonic is weak to water and will drown when put in it. He can't swim and he has a bad memory of drowning in the pool when he was younger. Sonic also is a bit clumsy thanks to his super speed, and has been known to fall down and walk into walls because he doesn't look where he's going. He also hates doing things slowly and waiting for things, as he prefers to move fast and do things instantly all the time.

For a while, Sonic was doped up on Ritalin at the request of his teacher Mrs. Winslow. This caused him to hallucinate and be nervous sometimes, and it affected the way he behaved. It was eventually decided that he didn't need medication.

Retrieved from "https://sonicfanon.fandom.com/wiki/Sonic_the_Hedgehog/Mobius_Redrawn?oldid=1867473"
Community content is available under CC-BY-SA unless otherwise noted.