Start a Wiki
This is an article about Sonic the Hedgehog (Marshalia13's Universe), a character created by Marshalia13 on 10/252013. 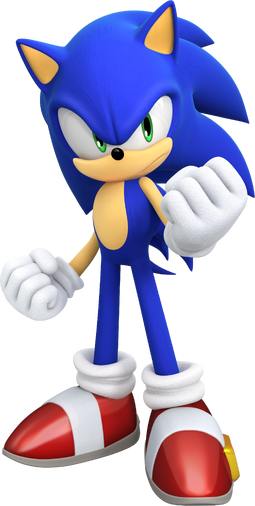 Nicky Maruice Parlouzer (more commonly known as Sonic the Hedgehog) is the primary field agent for the Freedom Fighters. Sonic is a hedgehog gifted with super speed and is the main hero of Mobius, thwarting the plans of Dr. Eggman for world domination.

Sonic was born as Nicky Parlouzer to Jules and Bernie Parouzer. After Sonic was seperated from his parents and siblings, Sonic came to live withhis Uncle Chuck in Knothole Village. Sonic would eventually, make himself known to Dr. Eggman, thwarting him at every turn. After his success in the Final Zone, Sonic would inspire a group of children who would become the Freedom Fighters.

Sonic is an extremely confident individual who lives for adventure and going as fast as he can. He is a born risk-taker, and not always in favor of following the rules. Be that as it may, he has a firm conviction of justice and a desire to see Dr. Eggman and all others like him defeated. If Sonic has a flaw besides recklessness and a certain disregard for authority, it is that he tends to take too much upon himself, much like his friend Mighty. He also enjoys somewhat antagonistic friendships with both Knuckles, Rotor the Walrus, Geoffery St. John and Antoine D'Coolette.

Sonic's most notable trait is his super speed, beig able to reach Mach 1 and higher on his own. Sonic can use his speed to scale up walls, knock down enemies in his path, and run across water to name a few. He shows complete mastery of his speed, but can't keep his balance if he is forced to come to a complete stop while running at high speeds. Sonic is also very agile, being able to dodge enemy attack with precise jumps and quick reflexes.

Sonic is resistant to pain and can keep going even if smashed against a stone wall. Sonic is also a skilled fighter and is proficient with hand-to-hand combat. Sonic's primary offensive manuvere is the Spin Dash, in which he curls into a ball and dash into enemies. He also uses a variant known as the homing attack where he homes in on opponents in midair while in ball form.

By absorbing the seven Chaos Emeralds, Sonic can transform into Super Sonic. While in this state, his natural talents are not only increased exponentially, but he is also granted the ability of flight, invulnerability and can as well manipulate Chaos energy to his will.

When Sonic accidentally inhaled a concentrated dose of Dark Gaia Energy, he unwillingly gained the ability to transform into Sonic the Werehog, a mutated version of his original form. In this form, Sonic is granted increased strength, elastic arms and sharp claws. However, the corruptive influence of the energy initially caused him to become extremely violent and aggressive. However, he soon learned to exert control over himself in this form. When exposed to sunlight, he automatically reverts back to normal.

Tails is Sonic's best friend and sidekick, helping him a lot on his adventures. Sonic and Tails are as close as brothers and always stick by each other's side, willing to put themselves and/or anything at risk for those they love and care about.

Knuckles the Echidna is one of Sonic's greatest rivals and best friends. They have known each other for a long time, but their relationship is somewhat complicated. Sonic and Knuckles are much like oil and water. While Sonic exemplifies the wind, laid-back, cool and free, Knuckles is the mountain, stern, serious and unmovable, which cause them to argue a lot. Because of their differences and morals, they do not understand each other and they do not always see eye to eye. While Knuckles at times rebuts his help and claims he could do better, Sonic just rolls with it and is merely glad to help him.

Sonic always welcomes a challenge from Knuckles and enjoys teasing him for fun because of his serious nature, and will even try getting him angry so he can fight him. Despite their differences, the two of them are connected by a hot-blooded friendship, and have joined forces many times.

Amy is another one of Sonic's close friends, and also happens to be his self-proclaimed girlfriend. Amy has been a maniacal fan of Sonic for a long time, but Sonic does not show as much attraction to her. Her affection for Sonic only grew after he rescued her from Metal Sonic.

On occasion, Sonic has been known to affectionately tease Amy for her crush on him, though deep down, he does not reciprocate any her of feelings. Still, he as always viewed her as a dependable, reliable, and trustworthy ally, having held faith in her ability to handle herself

Dr. Eggman is Sonic's arch nemesis, due to the latter having constantly foiled his schemes for world domination. Despite Sonic's massive streak of victories, he's occasionally had to team up with the doctor for the greater good. All the same, though, while Eggman will stop at nothing to defeat Sonic, and vice versa, Sonic has never really been shown to take much account of his adversary; he takes his fights with Eggman and his goons very lightly, cracking jokes and remaining fully confident that he can ruin his enemy's day, even when being confronted by the madman's deadliest of forces.

When Sonic and Shadow first met, they started out as enemies, each trying to stop the other from achieving their goals. However, when Shadow discovered he had been mislead by fake memories, he and Sonic joined forces to save the planet. Since then, they have remained arch-rivals, but also comrades, and have helped each other out on numerous occasions.

Like with Knuckles and Shadow, Sonic's relationship with Silver had gotten off to a rocky start (although the events of their initial meeting were erased from the timeline); the two were enemies. Even though he and Sonic are now allies, Silver still tends to get irritated by the former's cheeky attitude. Like Knuckles, Sonic will occasionally tease Silver for his core traits, although the two share very similar morals.

Sally Acorn is a close friend to Sonic and ex-girlfriend. Sonic inspired Sally in her youth to fight the Eggman Empire and dated before breaking it off, but remaining close.

Retrieved from "https://sonicfanon.fandom.com/wiki/Sonic_the_Hedgehog/Marshalia13%27s_Universe?oldid=1867472"
Community content is available under CC-BY-SA unless otherwise noted.