Start a Wiki
This character is only relevant to the Doriteverse continuity, created by Disgustedorite. Please do not use anything from this page for your own fanon without permission.
Sonic the Hedgehog 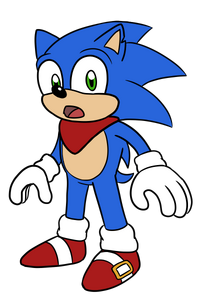 This page only applies to Sonic in the Doriteverse continuity.

Sonic is a blue hedgehog with a cream face and belly, a black nose, and green eyes. The quills on his head stick backwards into six points, while the quills on his back remain raised on his shoulders but otherwise fall flat against his body when not in use. He has a short quilled tail and triangular ears. He wears white gloves, white socks, a red scarf, and red shoes with a white strap and yellow buckles. His left ear has a small notch in it, left over from an early battle with a crabmeat.

Although he normally wears contacts, in situations where they wouldn't be safe to wear such as around smoke, or if they happen to get damaged and Sonic doesn't have a replacement on hand, he will put them away and wear a pair of glasses instead.

Sonic is the sort who keeps up a cool act without actually feeling like he's really cool at all. While he's as quick with his comebacks as he is with his feet and can make himself look cool in some situations with people he's familiar with, such as when he's with his friends or fighting Eggman, the moment he's taken out of a situation like that it all breaks down. His friendships are forged exclusively through hero work, as he's far too awkward to get to know someone normally. His impatience is a large part of this, as simply talking to someone he doesn't know well brings him down to a much slower pace than what he's used to. As a result, he sometimes accidentally comes off as a jerk when trying to meet someone new and it can haunt him for weeks.

Sonic has innate chaos powers, which runs in his family. This allows him to make use of chaos emeralds to use chaos control or go super.

Sonic's innate chaos powers can also manifest as wind powers, especially when he's riled up. While he can manipulate wind normally just with his speed, this lets him do so even when standing still or moving at a slower pace.

Sonic's most defining ability is his speed. His family isn't really known for this, generally being slower than average; Sonic gained his speed mostly by accident. As a young child he enjoyed running about, and with time he got faster and faster until, before he even realized it, he broke the sound barrier at the age of 7. It was this event that led to him gaining his iconic nickname.

While Sonic isn't the only super-fast mobian on Mobius, the novelty of the ability is what inspired him to use it as though it was a super power instead of just for quick transport like naturally speedy mobians, such as cheetahs. He also is not the fastest by any means and can be outrun in a short race, but he has enough stamina to eventually outrun most of his faster opponents in the long run--only speed-type overlanders, wolves, and dogs pose a challenge over long distances.

An unfortunate limitation of his ability, given that it's not normal for his kind, is that if he runs fast without good shoes it tears up the bottoms of his feet.

Sonic is especially skilled at rolling several rotations mid-run and getting back to his feet afterwards without tripping or slowing down. Sonic also knows basic first aid.

Sonic can easily be shaken by comparing him to a slow-moving object. He can also become frustrated and lose focus if a battle or conversation is forced into a slower pace.

Sonic's ears are physically sensitive and messing with them can throw off his senses very badly. If this happens outside of battle, panic may set in during his confusion.

Retrieved from "https://sonicfanon.fandom.com/wiki/Sonic_the_Hedgehog/Doriteverse?oldid=1867470"
Community content is available under CC-BY-SA unless otherwise noted.