Speed's awesome and all, but my friends are much more important. And it's all or none! 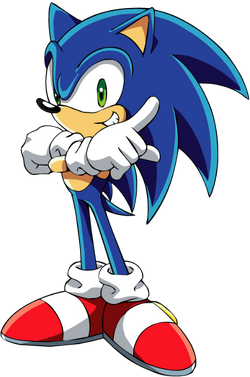 Sonic the Hedgehog is the well-known mascot of SEGA. He is the famed Blue-Blur hero of the world with his trademark ability to run faster than the speed of sound! Along with his friends, Sonic defends the town of Mobius from all evil-doers, including Doctor Engman and his robot army. This hedgehog will kick some serious tail and save the world any day!

Sonic is a 17 year old hedgehog, constantly roaming the world. He usually travels along with his best friend, Tails, and one of his good friends, Amy. Occasionally, he'd meet up with his two siblings, Sonia and Manic. He works at the Chili Corner, and enjoys spending time with his friends.

However, either with his friends, or just alone. He absolutely loves running. He is said to be the world's fastest being alive. Usually, Sonic trains with his friends, and always outmatches them in terms of speed.

Sonic is very brave and heroic. He never gives up during a challenge. He might let others win, but would still never admit it.His fearless nature makes him a bad inspiration. However, it al;so might influence others in a good way.

He is also pretty cocky. This side of him is quite obious to point out. He sometimes plays pranks, which brings out his impish behavior.He also has a huge fear of the water. This could bring down this side of him.

Break-Dancing- Sonic is very good at break dancing. His moves are pretty good. Only a few of his friends can dance better than him. His favorite move is the head spin. He usually performs these in Swag Fests.

Ice Skating- Tagging along with Louis and his gang, Sonic learned how to ice skate to compete in Ice Skating Contests. He has never won a ribbon, but he's pretty good. Figure skating isn't his thing, but when it comes to speed skating, he's king of the ice.

Snow/Skateboarding- Sonic also has a great ability to both snowboard and skateboard. He had more experience in snowboarding, being taught at a young age, while as he was taught how to skateboard by David.

Rapping- He knows how to rap too. He's may be not as good as David and the gang, but he's not bad either. He usually does this in times like when somebody asks him.

Acrobatics- Sonic also has pretty good acrobatic skills. Even though Michelle never taught him, he is well trained and almost a master. He also has well enough balance to grind on rails.

Chilli Dog Making- Being an employee at Chili Corner, he knows how to make his favorite food, the Chili Dog. However, he has a special ingredient that makes his dogs taste better than the others.

Superspeed- Sonic has the amazing and well known ability to run at the speed of sound. His speed is almost impeccable! However, this is only made possible with his red shoes. With his alternative outfit, he is still incredibly fast, but some of his friends might be faster than him.

Sonic and Blaze are currently dating. They like to spend time with each other, and eventually get married. Usually it is Blaze who wants to hang out with Sonic.

"Amy, you have to keep this a secret. You can't tell anyone."

Sonic and Amy are great friends, and secretly like each other. Before, Sonic was always embarrassed when Amy tried to chase him. Now, he doesn't mind it, he actually enjoys it very much.

Sonic and Tails are best friends to the point that they are almost like brothers. They always help each other out through troubled times and never gave up on each other.

Sonic and Knuckles are great friends. They usually hang out and have each others backs. Way back then, they used to be rivals.

==== Alexis Petals
Sonic and Alexis are close acquaintences. They don't see each other a lot, but Sonic buys a lot of her albums on oTunes ====

Shadow and Sonic are friendly rivals. They're actually pretty good friends. They usually hang out, but they compete in racing to see who's faster.

Silver and Sonic are friendly rivals. They sometimes battle each other, but they are still friends. Before, Silver thought Sonic was the Iblis Trigger, but then realized it was all wrong.

Eggman and Sonic have been enemies ever since Sonic's first rescue mission. Eggman always wanted to kill Sonic for foiling his Eggmanland plans.

Sonic and Bokkun are enemies. Sonic finds it a bit offensive when he takes his form and embarrasses them.

Retrieved from "https://sonicfanon.fandom.com/wiki/Sonic_the_Hedgehog/Darkest_Shadow%27s_Universe?oldid=1872286"
Community content is available under CC-BY-SA unless otherwise noted.