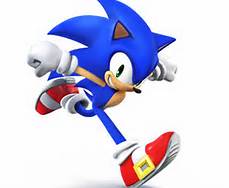 Sonic the Hedgehog is the main protagonist of the Sonic the Hedgehog series and Sega's mascot. He is a 15-year-old (turned 16 in Sonic Generations), blue, anthropomorphic hedgehog, and is a laid-back and cool-headed character, meant to symbolize peace. Like his name and species would imply, Sonic can move at the speed of sound (and even exceed this), and has lightning fast reflexes to match (hence his name), and can as well curl up into a ball, primarily to attack enemies. These are the distinguishing traits that were used to make his character and world-famous video games.

Well-known for his legendary cocky attitude, easy-going demeanor and somewhat short temper, yet strong sense of justice and love for freedom and adventure, Sonic uses his abilities to protect the innocent and his world (as well as many others) from the forces of evil, especially his arch-nemesis Doctor Eggman who seeks world domination.

Sonic was born in Lunatea. Dark Knights started to attack Lunatea, his mother, Queen Samantha, took him and his twin sister, Lou, away from them, but on of the dark knights stabs Samantha with a spear. She uses her powers to send her children to Mobius separated and tells Baby Sonic to be a brave little boy and save the world as she dies. He used to be the average 10 year old blue hedgehog on Mobius who gets bullied by the kids in his school, but he likes do draw, he does his school work and he loves to run. He has a friend/crush on a human name Piper, but she kills herself because of the bullies and he rans away, crying. After running for a while, he exceeded to do a Sonic Boom and his classmates are impressed. Since then, he has had super sonic speed.

Sonic has also been featured in games of many genres other than 2D and 3D platform games. The first of these was a pinball game, Sonic Spinball (1993), which expanded upon the pinball sequences in the first two platform games. Sonic has also appeared in "2.5D" isometric platformers (Sonic Labyrinth, Sonic Battle and Sonic 3D Blast), racing games (Sonic Drift, Sonic Drift 2, Sonic R, Sonic Riders, Sonic Riders: Zero Gravity, Sonic Free Riders, and Sonic & Sega All-Stars Racing.) and fighting games (Sonic the Fighters, Sonic Battle, and Super Smash Bros. Brawl). He also teamed up with his video game rival, Mario, for the first time in Mario & Sonic at the Olympic Games. They would also get together again in Mario & Sonic at the Olympic Winter Games, Super Smash Bros. Brawl, and Mario & Sonic at the London 2012 Olympic Games.

Video games such as Dr. Robotnik's Mean Bean Machine, Tails Adventure, Knuckles Chaotix and Shadow the Hedgehog starred supporting characters of the Sonic series; in some of them Sonic had a cameo role. The hedgehog has also made cameo appearances in numerous other Sega games such as Daytona USA.

Sonic has been described as being "like the wind"; a drifter that is always on the move and is noted for being free-spirited and adventurous. He values freedom above all else, living his life according to his own rules, rather than the standards of those around him, and enjoys nothing more than traveling across the endless boundaries of the world while searching for new adventure. With a strong passion for enjoying life, Sonic is never dwelling in one place for too long and is always moving forward to look for new experiences, making his life a series of adventures and events, while enjoying his freedom.

He mainly prefers to simply be called by his name and not any fancy title; in his encounters with Luna the Hedgehog, Princess Elise and Cream the Rabbit (the three called him "Mr. Sonic"), Cammie Stewart (who called him "Stickers"), Shahra the Ring Genie (who called him "Master"), Caliburn (who called him "Knave", though Sonic was especially annoyed by this), and Erazor Djinn (who kept calling him "Filthy rat"), he insisted that they merely call him "Sonic".

Sonic is mostly laid-back, cool and enjoys relaxation, though he is often impatient with slower things, and firmly stands for freedom, but he is never one to rest in the face of injustice or oppression. He hates evil in all its forms and can easily be riled up about it; if he witnesses someone being opressed, are suffering from injustice or are simply depressed or despairs due to others' actions he will not show a moment of hesitation and will instantly step in to help those in need, even if it means that his actions will be met with contempt, as stated in Sonic and the Black Knight.

In Sonic CD, Sonic actually had a few voice clips, who was voiced by Keiko Utoku at the time, in which he would say, among other things, "I'm outta here!" if the player stood still for 3 minutes, and "Yes!" if the player obtained a 1-up. This was also the first and only time Sonic had been voiced by a female actor.

Starting with the 1998 game Sonic Adventure, all of Sonic's video games feature voice acting. Sonic was played by Junichi Kanemaru, who later went on to play Sonic in the Japanese version of Sonic X. Ryan Drummond performed the role of Sonic in Sonic Adventure and continued to play the role for several games. Information taken from the credits of both Sonic Adventure games, the Sonic Advance series, and Sonic Heroes. 4Kids Entertainment decided not to use Drummond's voice in their US/UK dub of Sonic X, instead choosing their own Jason Griffith. Despite this, Drummond continued to provide the voice of Sonic in the series until 2005, when Sega replaced all their Sonic voice actors with their 4Kids counterparts, in order to keep his voice the same in all media forms. Effectively, this meant that beginning with Shadow the Hedgehog and Sonic Rush, Jason Griffith became the official game voice actor for Sonic the Hedgehog, Klonoa the Hedgehog and Shadow the Hedgehog (and Jet the Hawk in Sonic Riders). This has been a controversial decision among fans of the Sonic Adventure voice cast.

As from 2010, SEGA  had announced that they have changed the whole cast of the active characters of the franchise (sans Eggman, Natalie, Choro, Spencer, Lilly, Larry, Odie, Brook, Nikki, Wendy, Lolo and Popka), replacing Griffith with Roger Craig Smith.

Sonic is known best for his speed, with the ability to run at speeds greater than Mach 1, which is at the blistering speed of 768 miles per hour. This is evident in many games, where Sonic is recorded to run at speeds faster than 765 mph. In Sonic Unleashed, the checkpoint posts (Star Posts) also act as radars that clock Sonic's speed when he passes them. Due to the fact that his speed increases the longer he's boosting, it's possible for the checkpoint posts to show Sonic's max speed in-game, being able to clock him going at over 2,500 mph. It is also stated in the Sonic Adventure DX manual that "He's the world's fastest, hypersonic hedgehog" which is at a staggering speed ranging from 3,840 mph to 7,680 mph. He is occasionally referred to as "the fastest thing alive," and can run backwards at full speed just as well as forwards, as shown in the Team Sonic opening cut-scene of Sonic Heroes. Due to such speed, he is able to scale right up the walls of buildings, or similar structures, and can also run right over water.

By using all seven Chaos Emeralds, Sonic can enter a Super State, transforming him into Super Sonic. This is by far Sonic's most frequently used transformation. In this state he can fly, is faster, stronger and nearly invincible. He does, however, need rings to maintain this transformation or else he will revert to normal.

In Sonic the Hedgehog 3 & Knuckles, Sonic also possesses an extended and more powerful form of Super Sonic, called Hyper Sonic, which he can assume with the seven Super Emeralds. This form basically shares the same powers and traits as Super Sonic, but they are all upgraded and are more powerful than Super Sonic's. Hyper Sonic also makes a reappearance in Sonic Dimensions. While Sonic is tied up in chains, the seven chaos emeralds and Nimbus' powers transforms Sonic into Hyper Sonic so he can defeat Nazo.

Retrieved from "https://sonicfanon.fandom.com/wiki/Sonic_the_Hedgehog/Cami?oldid=1867463"
Community content is available under CC-BY-SA unless otherwise noted.