Sonic Fanon Wiki
Register
Don't have an account?
Sign In
Advertisement
in: Video games, Sonic and the Steel of Darkness, Cartoon,
and 8 more

Sonic and the Mayhem Master

Template:SFW Awards Nomination
"In another time, another place, let's not make the same mistake..." ---Tagline

Sonic and the Mayhem Master is a fan-made RPG series made by James Lising (Trinitroid). You'll be entering the world of steampunk, controlling as a different Sonic with his own story. Unlike from others, this one is a little bit slower.

Sonic has lost his super-speed and now, he uses mechanical gauntlets to work himself back into action. He can now grapple, cling, stretch, and so much more. Solve a mystery with the sassy Amy Rose, and find out the truth of this mechanical nightmare.

This section will be changed in the future.

Players can interact the world around them, by pressing the (E). They can interact with characters, objects, or other instances. They can buy items in shops when needed. Enemies will come into contact with the player. Once done, the player will enter a fight with the enemy. Some may even damaged you from range before starting the fight. Traps are present during this case, and may even damage you.

The game offers a different style of battle system, known as the Pressure System. During battle sequences, players can't pause the game. Battles are under time-sequences. The player can build up MP as they dodged enemy attacks. To dodge, they can either jump with (W), or cancel some attacks with the (LMB). Enemies will attack relentless until they overheat. Once overheat, it is the player's turn. They can either attack, heal, boost, or even run during this phase. Each selection cost MP during the process. Their turn will be over once the enemy completely cooled down. They can skip this phase if needed, doing so will reward more MP. The battle is over if either side has no more health.

These stages are the ones available for public information.

These are the only ones available as information for right now.

This section is considered to be cancelled or postponed in the meantime.

The animated series follows the same principle from the game. Although, the only difference is that the art style is slightly different for some characters. The story focuses a lot on the everyday life on the character and the plot. The show is under the genre of comedy. The series will be posted and uploaded in Youtube in segments or episodes. In the current development, sketch segments were made for the preview.

So far, only a cut episode segment is shown in the episode: The Little Doll of Horrors. This episode introduces, TiDi (Tails Doll).

The comic follows the same principle to the animated series. The comic was cancelled or postponed in the meantime.

Alpha poster of the game 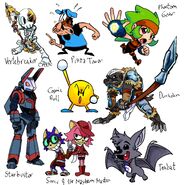 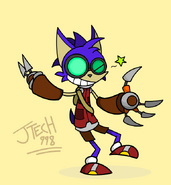 Sonic and the Steel of Darkness - OPENING (Animation)

Sonic and the Steel of Darkness Alpha -1.01 Dev-Teaser

Sonic and the Steel of Darkness (Alpha -1.01) - Demo Playthrough

Sonic and the Steel of Darkness Dev Diary -0.55 Part A

"Please comment or criticize the project for future improvements and revisions." --Trinitroid