Not be confused with Logo1999 and simple Version

This game was planned for Dreamcast, but Dreamcast support ended, is a cancelled port.

This gameplay is silimiar to Sonic Adventure 2.

You can choose and change to Sonic, Sonia and Manic. To music blast, Press R2 (Z Gamecube and PC, White Button Xbox) to do Rock 'n Roll when Music Gauge is full to break all enemies. You can control Player 2 here.

Sonic is a hero hedgehog who go along with Sonia and Manic. He uses Guitar.

Sonia is a hedgehog who is a Sonic and Manic's sister. She uses Keyboard

Manic is a green hedgehog who is a Sonic and Sonia's brother. He uses drums.

Sally is a beautiful princess acorn. She appears as all cameos along with Tails and Knuckles.

Tails is a 2-tailed fox. He appears as all cameos along with Sally and Knuckles.

Knuckles is a strongest echidna. He appears as 75 cameos than Tails and Sally.

He appears as friendly character and making as Powers shop.

Appears as Mission by saving the Trevor.

She appears as Gallery.

Appears as 89 Cameos than Tails and Knuckles.

Dr. Eggman is a evil scientist. Appears as Final Boss.

Sleet is a canine bounty hunters of Eggman. Appears as Sleet Boss and Sleet and Dingo Boss in Eggman Base and Final Boss.

Dingo is a 2nd canine bounty hunters of Eggman. Appears as Dingo Boss, Sleet and Dingo Boss in Eggman Base and Final Boss.

In a videogame based of TV Show. Dr. Eggman, Sleet and Dingo had planning to destroy Mobius. But Sonic, Sonia and Manic will stop them! 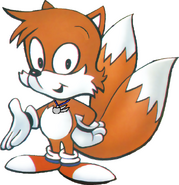 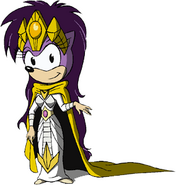 Queen Aleena the Hedgehog
Add a photo to this gallery 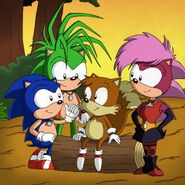 Add a photo to this gallery
Retrieved from "https://sonicfanon.fandom.com/wiki/Sonic_Underground_The_Game_(Flamey2010%27s_Version)?oldid=1878534"
Community content is available under CC-BY-SA unless otherwise noted.