This is how Sonic is displayed in my imagination and in any of the roleplays I do.

Sonic is know as the fastest thing alive on Mobius. To his family, he is mostly known as the Saving Light or the Blue Blur. When he was 5 (Sonic the hedgehog 1), he lost his mother Amber to his brother, Trickster. Trying to enjoy the rest of his life, Sonic decided to live on his mother's life in his many adventures. A few days after he tried 8 (Sonic Adventure DX), his mother turned out to be alive and hugged him. Amber (Sonic's mother) showed him to the castle she had been living in... It turned out that Sonic and all of his brothers would one day own this castle. Amber later told Sonic that a hedgehog and another would be the kings to rule Mobius. In order to win Amber's favor in being one the people to be king, Sonic traveled around the world and did many adventures to show his worth. Amber did pick him but she had to pick another. There were only two people left that Amber trusted would be the best. Shadow (Age: 24) or Silver (Age: 22)... Both equally the best for the choice but who... Till this very day, Sonic still tries to please his mother with his actions.

Sonic is a very laid-back, happy spirit. He loves to play party games with the Mario Bros but not Wario or Waluigi. Sonic always is ready when there's trouble.

Talk about what friends and/or family they have.

"Give it your best shot!"

I draw this picture... It's from the game we can't forget.... The greatest fight ever! Super Sonic vs Perfect Chaos 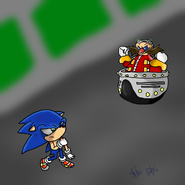 I draw this in my spare time.... It's Sonic vs Eggman yet Sonic's losing
Add a photo to this gallery

Retrieved from "https://sonicfanon.fandom.com/wiki/Sonic_The_Hedgehog_(SM97%27s_version)?oldid=1552947"
Community content is available under CC-BY-SA unless otherwise noted.