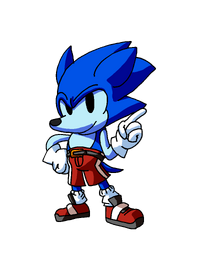 Sonic The Hedgehog, or Nicky Neddlemouse is an Anthropomorphic blue hedgehog that has the ability to Run at the speed of sound (and maybe beyond) hence his nickname. Sonic has a strong sense for justice, in spite of his more smart-alack behavior at time, he is willing to run to the ends of the world and back to protect his friends, family, and the innocent. But unlike his main counter part, this version of Sonic is younger, less experienced, more playful than the main version, choosing to play with his foe and run circles around them, often literally, pulling pranks with his friend Mach the Rabbit

Sonic is a hedgehog, with blue fur that covers most of his body, cyan colored skin, he is slightly round but leaner than his classical canonical counter.His spines are sharper and a bit longer as well, Sonic's hair and spines make it appear that his head is connected to his body. His face consists of a long snout with a small nose at the end, his eyes are small and beady.

Sonic's attire consist of his "Power Sneakers" branded shoes, a red sneaker with a grey tongue, white lace, and a gold buckle. His soles are dark grey and have been modified with a flexible friction-resistant material at the bottom. He wears a pair of red shorts with a white stripe on the side, its held up by a grey belt with a gold buckle. His gloves are white with a red strap around the wrists.

Sonic is a very active,curious, and free spirited type of guy, always exploring his environment looking for the next adventure, or trouble, he'll take ether. Constantly thrill-seeking, he gets bored very quickly and will often just peace out of a dull situation .Due to his mischievous and playful nature he likes to play small pranks on his foes, and sometimes friends when he is feeling especially cheeky that day.

Sonic in most situations has little to say often letting his actions and body language speak for him,but when he speaks he will make smart remarks to anyone and everyone.Despite the jabs at everyone, Sonic is very easy-going and joyful around his friends and even to complete strangers. Sonic can be a bit hissy at times and displays a bit of a short fuse.Sonic's demeanor is surprisingly calm and cool, but when annoyed his demeanor shifts to being cold and his normally playful pokes turn into full blown insults, This makes him rather hard to talk to for more than a short time.

Sonic is most well known for his super speed and high reflexes, being able to easily reach Mach 1 and react to his surroundings at that speed, but whether or not this is his full speed is unknown and due to this speed he has taken the moniker of the "Fastest Thing Alive". Sonic uses his speed to preform free running stunts and parkour to show off his abilities.

Like other hedgehogs Sonic can curl up into a ball for defense, but unlike others of his kind sonic can rev up and preform an attack called "Spin Attack" a percussive-slashing attack.

Sonic seems to have limited chaos energy manipulation, being able to harness Ring energy for protection against mortal damage and to boost his speed significantly. Sonic can manipulate his Chaos energy for attacks and preform a much powerful form of his Spin-Attack, which he calls the Buzz-Slash.

Sonic has a major fear of open-water, it can be best described as "crippling". Unlike other hedgehogs, Sonic can't swim and will sink like a stone, whether or not his fear of water prevented him to learn how to swim or the other way around is unknown.

Sonic's cocky and playful nature can really get him into some dicey situations,ether misjudging his own strength or his opponents capabilities. Sonic will almost always over-estimate his own strength and stamina, even when exhausted he will keep on fighting, even to the point of fainting.

Retrieved from "https://sonicfanon.fandom.com/wiki/Sonic_The_Hedgehog_(Burst_universe)?oldid=1878395"
Community content is available under CC-BY-SA unless otherwise noted.