Sonic the Hedgehog: House of Iblis follows a group of teenagers living in Soleanna.

Rouge the Bat is horrified to discover her close friend Blaze the Cat has disappeared without a trace; she accuses the new housemate Amy Rose of being involved. Later, Amy begins to see a young girl around the house, who claims the house is hiding a secret treasure. Amy soon befriends Cream the Rabbit, Sonic the Hedgehog, and - to everyone's shock- Shadow the Hedgehog. Together, they set out to find the truth about Blaze's disappearance.

Blaze has returned to the Iblis House, but has unknowingly brought strange faces. A shadow stealing god, Mephiles; Princess Elise, reigning monarch of Soleanna; and a futuristic hedgehog, Silver. Together, Blaze, Amy, Shadow, Cream, Tails, and Sonic must find the Scepter of Darkness, or pay the ultimate price...

It's the teens against the teachers as they race to defeat a deadly competitor and prevent a great evil from reawakening forever! A new term has started, the students have returned, and with them, a villain even deadlier than Mephiles is on the verge of awakening from his sleep. Now it's up to Sonic and his friends to reform the Group and stop the ancient villian from being unleashed. But when people aren't what they seem, who can be trusted?

This Spring brings shocking moments to the teenagers living in Soleanna. Chaos is about to be unleashed, and everyone has something to hide. Sonic, Sally, and Knuckles try to figure out Shade's motives, while Rouge conducts an investigation herself. Cosmo is suffering from memory loss, while Tails and Shadow join Shade's team. Blaze and Silver's relationship takes a turn for the worse. Shade and Silver are secretly serving under the employment of Red Coat, who may just be someone everyone knows well...

A terrifying discovery has rocked Soleanna to its core. Cosmo is determined to find out who Red Coat is. Knuckles has hired the Chaotix to help solve what happened to Rouge. Julie-Su is trying to help Knuckles with his grief. Sonic and Tails set out to find the origins of the mysterious car. Cream is brought back into Red Coat's Team. Red Coat orders Shadow to target Sally and use her secret against her. Bunnie is starting to lose Vanilla and Elise's trust. Red Coat has always seemed to be in charge, but could she be serving a more powerful Mistress?

4. Relics of the Past

5. A Death in the Family

7. Betrayal of the Heart

Jason Griffith as Shadow the Hedgehog

Lani Minella as Rouge the Bat

Michelle Ruff as Cream the Rabbit

Dan Green as Knuckles the Echidna

Laura Bailey as Blaze the Cat

Janel Parish as Shade the Echidna

Rebecca Handler as Vanilla the Rabbit

Amy Birnbaum as Cosmo the Seedrian

Pete Capella as Silver the Hedgehog

Elara Distler as Tikal the Echidna

Lucy Hale as Julie-Su the Echidna

Kyle Herbert as Big the Cat

Claire Holt as Marine the Raccoon.

Sonic the Hedgehog: The original resident of Iblis House. Decided to settle down in Soleanna after having many adventures. Sonic helps Amy, Cream, Shadow, and Rouge find the puzzle pieces and Blaze. Sonic helps Tails and Cream in their relationship. As the awakened Nocturnian, Sonic takes the lead to protect Blaze and Soleanna. He has formed a close bond with Sally Acorn.

Amy Rose: The new girl. She moved here from Central City. Arrived on the same day Blaze the Cat disappeared. She forms a bond with Shadow the Hedgehog, Sonic the Hedgehog, and Cream the Rabbit. Amy was dating Shadow. Amy, Shadow, and Blaze discover  a tunnel system under Iblis House. Amy, free of a spell placed on her, was now able to leave Soleanna. She decided to stay in Central City, but has popped up in Soleanna to help her friends in times of danger. However, she was acting very strangely during Winter break when her friends visited in Central City. Later, it is revealed that Amy is Red Coat. Amy has now joined G.U.N.

Shadow the Hedgehog: The Ultimate Lifeform, Shadow will always look 15. He and Amy join each other to discover the mysteries of Soleanna. Amy and Shadow used to date. Shadow joins Blaze and Amy in their quest to find the Scepter of Darkness. Shadow was saddened that Amy wasn't returning to Soleanna. Along with Rouge, he went to Prison Island to uncover Professor Gerald's grave. There, he found Gerald's old journals. Later, Shadow was saved by Red Coat during Chaos' attack on the New City. Shadow took Red Coat's offer to join her team. Shadow has returned to G.U.N. alongside Amy Rose.

Rouge the Bat: Former jewel thief and G.U.N. agent, Rouge decided to live in Soleanna. She doesn't trust Amy, and was a close friend of Blaze's. The lack of trust has dissolved, but now has brought drama, due to Amy and Shadow getting closer. Rouge is suspicious of Shade, and wholly believes her to have killed Cream. She was taken hostage by Red Coat, but later escaped. Rouge was separated from Knuckles after a huge tidal wave took her out to sea. Rouge recently had a funeral that was paid for by Knuckles.

Miles "Tails" Prower: The handiest mechanic of the group, Tails decided to live in Soleanna following Sonic. Tails uncovers the secret about Eggman and his robots. He will stop at nothing to defend his friends, and is currently in a relationship with Cream. Tails took up Shade's offer to join her team, in order to find out why Cream died, and to find out who Red Coat is. Tails is currently traveling with Cream to his workshop in the Mystic Ruins.

Cream the Rabbit: The youngest resident of Iblis House, Cream has the strongest bond with Amy and Blaze. Cream scares easily, but that won't stop her from helping out her friends. She and Tails are now dating. Cream faked her death in order to find out information about Red Coat. Cream is traveling with Tails to the Mystic Ruins.

Blaze the Cat: Blaze is the Chosen One, destined to protect Sonic's world, and her own, from great evil. She was in a relationship with Silver, but it ended when she found out he was working with Shade. Blaze sacrificed herself to defeat Chaos in order to protect her world.

Silver the Hedgehog: Silver is from the future, and traveled back in time to experience what life was like in the past. However, he was naive enough to join Shade's team, and became drunk with power. Silver became a host for negative energy which Chaos used to escape the Master Emerald.

Shade the Echidna: Formerly of the Nocturnus Clan, Shade has started a relationship with Knuckles. She can be a little bossy at times, but means well. Shade accompanies Knuckles to Angel Island to protect the Master Emerald at times. Shade and Knuckles are now broken up. Shade is director of the exhibition to the Dusty Desert. Shade served Red Coat, and released Chaos from the Master Emerald. Unfortunately, her and Silver's bodies became vessels for negative energy which Chaos used to escape the Master Emerald, and become Perfect Chaos.

Sally Acorn: Sally is the mysterious new student, sent to Soleanna by her dying father who has tasked her with stopping a great evil. She's both sunny and strong, and works closely with Sonic to fulfill her father's wishes. Sally is trying to help Sonic, Knuckles, and Tails discover Red Coat's identity. Sally is currently traveling with Sonic.

Cosmo the Seedrian: Cosmo is a new student at Iblis House. Though she is often seen as an absent-minded flower child, she often surprises others with her wisdom. Cosmo has a crush on Tails, but is good friends with Cream. She followed Cream to the Soleanna Train Station, where she was attacked by Shade. Cosmo lost her memory of this, and was trying to get it back. Cosmo is now trying to find out Red Coat's identity. Cosmo has received a scholarship to a college in the Kingdom of Acorn and is going to attend in the fall.

Mighty the Armadillo: Mighty is a gruff, novice journalist. He has joined the Chaotix.

Ray the Flying Squirrel: Ray can be insecure at times, but is loyal to his friends. He has joined the Chaotix.

Honey the Cat: Honey is a tough young girl that usually keeps to herself. She has moved to Station Square.

Rosy the Rascal: Rosy is Amy's sister and was possessed by the Zeti. She has moved to Station Square.

Julie-Su the Echidna: Julie-Su is Knuckles' main friend. She is helping him cope with losing Rouge. Also, she decides to enroll in a martial arts class under Espio the Chameleon. Julie-Su is now a member of the Chaotix alongside her fiance Knuckles.

The Chaotix: Vector the Crocodile is the Lead Detective, Espio the Chameleon conducts crime scene analysis, and Charmy Bee is the Computer Hacker. New members are Knuckles, Julie-Su, Mighty, and Ray.

Felicity Cat: Felicity is a reporter covering a sad story. She's also set her eyes on Knuckles the Echidna.

Dr. Eggman: This villain has seemingly repented for his crimes, and manages the Iblis House. His E-100 models take care of the menial labor around the House. He was partners with Nega to try to unleash Ifrit, but was betrayed by Nega. Eggman was later involved in a hit-and-run accident with Bunnie Rabbot, but was taken to the hospital by Vanilla and Elise. Eggman is currently searching for the Lost Hex.

Maria Robotnik: A mysterious girl from Shadow's past, who Amy begins to see throughout the House. She becomes a key helper in the mystery.

Mephiles the Dark: A mysterious god who haunts the Iblis House. He wants Blaze to find the Scepter of Darkness.

Elise the Third: Elise is the princess of Soleanna. She was housemother of Iblis House for a short while, and was possessed by Mephiles. Later, she supplied a warehouse for the Iblis House residents to stay at after it had been bombed. Elise is in a secret alliance with Vanilla and Bunnie Rabbot.

Professor Nega: Nega is Eggman's descendant. He was the history teacher. His subjects included ancient tribes and civilizations. Nega planned to unleash Ifrit into the world, but was stopped by Sonic and his friends. Strangely, after being defeated, he transformed into a Tarot Card.

Tikal the Echidna: Tikal appears to Sonic, telling him to seek out the aid of a new ally. She sends him visions of future and past events.

Chaos Zero: Chaos was trapped by Tikal inside the Master Emerald. Red Coat, Shade, and Silver unleashed him with negative energy, causing him to become Perfect Chaos and damage Soleanna New City.

Bunnie Rabbot: Bunnie arrived in Soleanna shortly before Chaos' attack. When she arrived, she ran into Eggman, and was involved in a hit-and-run accident with him. Bunnie is also in a secret alliance with Vanilla and Elise. Bunnie has now moved back to her home Knothole.

This is a list of couples that are currently in House of Iblis: SonAlly, TailReam, KnuxUlie-Su, ShadAmy 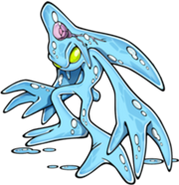 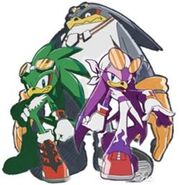 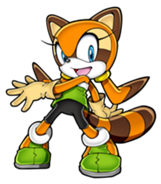 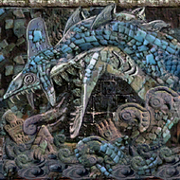 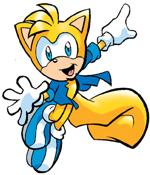