Sonic Party 4 is the fourth game in the Sonic Party series and the first for the Nintendo GameCube. Developed by Hudson Soft and published by Sega, the game was initially released first in North America in October 21, 2002. It retains the basic gameplay aspects from previous Sonic Party titles, where up to four players roll dice to move around a board, earning coins from landing on Spaces, events, or winning minigames played at the end of every turn to buy stars. Features introduced in previous Sonic Party games such as the introduction of the usage of items from Sonic Party 2 to assist players against their opponents and the ability to carry up to three items from Sonic Party 3 return. New elements introduced in Sonic Party 4 include the ability for players to team up in pairs in Party Mode, creating a custom minigame pack selected entirely by players of the game, and the first Sonic Party game to introduce side-collectibles in the form of presents. The game is notable for introducing boards fully rendered in 3D, though the navigational board space layout remains flat until Sonic Party 5.

Sonic and company are enjoying the outdoors when a mysterious cloud forms in the distance. As the cloud moves closer, a giant bag appears to be floating in the sky. The bag opens up to reveal Omochao, Hero Chao, Dark Chao, Orbot, and Cubot, who invite Sonic and the gang to party in the Party Cube.

Omochao then appears and said that there is still someone who didn't give their gift to the player. The lights suddenly turn off, cuing a spotlight, then Omochao points to the sky and a Chaos Emerald is seen, zipping across the sky revealing a constellation of the character's winning pose.

The epilogue shows the five hosts without their costumes, following after the moving Party Cube. After a few seconds, the Party Cube blasts off into space, never to be seen again.

Sonic Party 4 retains the board gameplay from previous Sonic Party installments. Four players take turns to navigate around a digital game board using a Dice Block that randomly rolls numbers 1-10, within a set amount of turns. Prior to starting out on a selected board, the four players need to roll a Dice Block that determines the order they will play in. Players who roll higher numbers in the beginning will start out earlier, and their HUD displayed on the corners of the screen are corresponding to what order they roll in. The overarching goal of the game is to purchase as much Chaos Emeralds with collected rings as possible, within the limit of turns; players first earn 10 rings to start out with. These chaos emeralds cost 20 rings to purchase, and they are found in various, set locations on the board. Once a star is purchased, the star migrates to another location on the board, where players then need to navigate there to purchase again. Once all players have moved, a turn is passed and a mini-game is randomly selected from a roulette of mini-games and played; initially mini-game names are blocked out with question marks until they have been played at least once. These mini-games involve players doing actions with very specific rules under short time limit to outperform their competition. If the players are successful by beating their opponents, they earn 10 rings as a reward, though mini-games classified as Ring mini-games (mini-games that have their text colored yellow) has the potential of players earning more rings, and they keep those rings regardless if they collected the most or not. 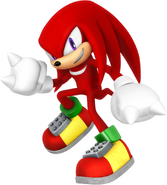 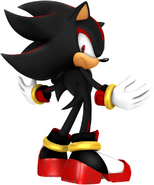 Rouge the Bat
Add a photo to this gallery

Retrieved from "https://sonicfanon.fandom.com/wiki/Sonic_Party_4?oldid=1824221"
Community content is available under CC-BY-SA unless otherwise noted.