Start a Wiki
This page is under construction. 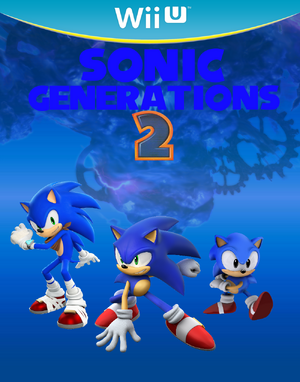 The story starts in the Sonic Boom Timeline, where Time Eater attacks, and opens portals. The 5 Heroes are trapped inside 5 ones, but Tails was sent to Modern Sonic's Timeline.

Modern Sonic finds Boom Tails, thinking he is the real Tails. Boom Tails thinks Modern Sonic is the Sonic from his dimension. Suddenly, Time Eater opens another Portal, sending Sonic and Tails to a new version of the void HUB from Sonic Generations. The first stage is Green Hill Zone, which has no boss fight. After cleared with both characters, it skips to a cutscene were Sonic finds Modern Tails. He then learns from the two Tails that Time Eater brought the other Tails from another timeline. Afterwards, after saving Tails, Underground Zone appears. The heroes head to it.

After defeating Arjiigoku Mech, Classic Sonic and Classic Tails are found. At this point in the game, you don't have to clear every single stage in the zones with all characters. After clearing Aquatic Army Zone, the heroes are transported to the Death Egg, where you must battle Death Egg Robot.

After his defeat, it skips to a cutscene in the Modern Death Egg. Zavok appears, as he has once again formed a alliance with Eggman. Robotnik and Lyric are also there, and the rest of the Deadly Six. Zavok sends the Deadly Six to go find Sonic and co.

Retrieved from "https://sonicfanon.fandom.com/wiki/Sonic_Generations_2_(GamerTendo)?oldid=1556672"
Community content is available under CC-BY-SA unless otherwise noted.