The story of Sonic Freedom tells Sonic and the Freedom Fighters' journey to rescue a Human girl named Hope from Dr. Eggman. As the story unwinds, Sonic discovers that he must fulfill a greater destiny, entrusted to him by the Gods of Mobius and defeat the Xorda, an alien race that has conquered Mobius for 10 years.

The game's story is designed to be 60 hours of gameplay long. It is divided into chapters. Each chapter gives the player the opportunity to play as a different character, with some chapters being dedicated to a deuteragonist. A total of 20 chapters are planned, each one needing roughly 3 hours to complete.

"The Mobian Mythos speaks of Eh-Ra , the God who created Mobius and gave its inhabitants the Chaos Emeralds, source of divine power, to protect themselves in times of need. But this mythos soon became a fairy-tale and this fairy-tale, a lullaby, as Mobians stopped believing in the tales of Old. People lost their faith in the Gods, but the Gods did not abandon Mobius". - Mobian mythology lore

"In the beginning, Eh-Ra created the world. He created the Mobians and the Humans and gave them fire, the gift of intellect. After, he proceeded to the creation of the rest of the Gods. Piri'thu, Rai-Oh, Queto'ra and Azimuth; four deities to watch over Mobius, serving as Eh-Ra's channels to the physical world.  Piri'thu created the sky and the stars, Rai-Oh created the mountains and the weather, Queto'ra created the forests and the trees and Azimuth created the seas and the oceans.

Humans and Mobians lived in harmony over the peaceful world of Mobius, but evil was not long before it appeared. Three children were born out of the union of Kakia and Phthonos: Agunus, Nusgau and Suguna. The three wizards decided to usurp Eh-Ra's power and become God. They fused into one single grotesque and almighty entity named Ixis Naugus , the embodiment of evil. Ixis battled for the reins of Mobius against the Gods but Eh-Ra and his army defeated Ixis and banished him to the Zone of Silence. Proving, however, to be too powerful to be contained, Eh-Ra bargained with the demon. Ixis agreed to reside in the Zone of Silence for eternity, but in return, a mass devestation would take place in Mobius that would cause the death of millions, every 1000 years.

Sensing that Ixis would betray his word, Eh-Ra forged the Chaos Emeralds out of his divine energy and bestowed them among the Mobians, so as to use them to protect themselves from evil in times of great need."

- From the "Tales of Mobius"

Chapter 1: A Storm is Coming

The Freedom Fighters, led by Sonic, infiltrate Grimer's base in order to rescue Nedymus, a Mobian seer with the ability to forsee the future.

"10 years have passed since the day the Xorda came visiting from the sky, waging an endless war upon the planet. War continues. But people have not yet lost their hope; a group of youths calling themselves the Freedom Fighters struggle to awaken the peoples to join the battle in regaining their freedom."

Chapter 1 begins with a cold opening as Sonic infiltrates the Grimer's base at night with his mission being to rescue a Mobian seer named Nedymus. After bypassing its heavily armed defenses at the bridge, Sonic opens the gates and is assisted by Antoine and Bunnie Rabbot. The team confronts the Grimer in his giant mech and upon defeating him, they rescue an imprisoned Nedymus.

Back at Knothole, Sonic visits Tails at the hospital, who has been in a coma. Dr. Quack assures him that the condition is stable. After leaving the hospital Sonic meets his friends and the royal family at the royal hall. There, in front of the people, Nedymus makes a prophecy that the appearance of a rain of shooting stars in the night sky will signal the end of the Xorda rule. Only then will the world know peace once more. And that time is coming. At the end of the chapter, Sonic is called to Princess Sally's room. Sally expresses her concern to Sonic over the fate of the world and embraces him in tears knowing that a storm is coming.

After wondering into the forest in search of totum to repair Rotor's airplane, Sonic discovers a girl in stasis inside an abandoned pod. When he accidentally awakens her from her slumber, Sonic takes her to Knothole where the civilians name her Hope.

The next day, Sonic is told by Rotor to head to the Forest of Um to search for totum, a rare metal that he needs to repair the Tornado. Sonic heads to explore the forest and after being hunted down by some of the Humans' seemingly deactivated robots he ends up in an unfamiliar part of the forest. There he comes across an abandoned capsule covered in vegetation, containing a Human girl in stasis. During a short fight, Sonic throws one of the robots on the capsule, accidentally activating it and awakening the girl from her stasis. He takes the girl on his back and escapes from the robots.

At Knothole, Sonic unsuccessfully tries to hide the girl from the townspeople, until he is discovered and brought forth to King Maximilian. The girl, unaware of where and when she has awaken, begs for forgiveness and tells them that she has no recollection of her memory. Princess Sally intervenes and begs her father to let the girl stay in their city. Driven by his hatred towards Humans, Prince Elias refuses such an alternative, believing that allowing a Human to live amongst them would jeopardize the whole nation. King Maximilian decides to let her stay in Knothole under the supervision of Sonic, until a permanent decision is made. When asked about her name, the girl replies that she does not remember it. Sonic proposes to name her Hope, after remembering the initials HOPE inscribed on the capsule.

The following day, the royal family is visited by a delegation of the Humans, led by General Lialda, who offers them terms of compliance to the Federated States of Silmorphitelia. King Maximilian rejects the offer and dismisses them.

A few days later, King Maximilian passes away and his son Prince Elias Acorn, heir to the throne is announced new King of Acorn. In the midst of the coronation, the Kingdom is attacked by robots of the Humans. Sonic and his friends fend off the enemy attack, until Hope is abducted by one of the robots. King Elias recognizes the attack as an insubordination to the Humans' treaty and wages war against them the next day.

Sonic reforms the remaining Freedom Fighters and head searching for Hope, only to find out that the evil Doctor has returned.

Sonic reforms the previously defunct Freedom Fighters. The team now consisting of Sally, Bunnie Rabbot, Antoine, Amy and Sonic, leave Knothole and head to Green Hill Valley in search of information regarding Hope's abduction. After learning that one of the Humans' robots was detected heading south, the team goes 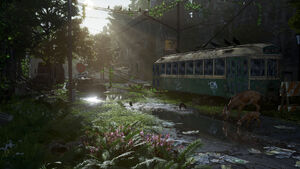 to Absidia, an abandoned and ruinous city consumed by nature, belonging to the humans of the Old World. There, in search of clues, the team faces against beasts and machines alike which roam the area, until they are confronted by Infinite, a former adversary of Sonic, now lieutenant general of the Humans. The battle reaches an end when E-123 Omega appears just in time to cause Infinite to flee in terror upon his sight.

The team is informed by Omega that large numbers of the Humans' machines have been spotted at the coastline, presumably building a base there. He joins the party temporarily to guide the team to the sea.

Retrieved from "https://sonicfanon.fandom.com/wiki/Sonic_Freedom/_Story?oldid=1834281"
Community content is available under CC-BY-SA unless otherwise noted.