Skyblade743 has been a Featured User in the past. He's a "cheery guy" as he describes himself with a strong passion for science fiction material and video games. I admit that having interviewed him two years ago, he seems more mature and his thought sophisticated. Outside of the scope of this wiki, Skyblade743 is definitely the person one could have a conversation with for hours on whole sorts of things and not get tired of him because he has his own views and opinions that are authentic.

Q1: How did you spend your Christmas vacations?

A: I met up with some old friends I haven't seen in a long time, and some of my family members who live further away came to visit on Christmas Eve. I'm actually still on Christmas vacation, but this week is just revising for school tests at the start of the year, so calling it a vacation is pushing it a little.

Q2: Your best memory of the past decade.

A: ) That's a whole lot of ground to cover, and it's hard to pin down one memory. That said, I would either say the London 2012 Olympics (I was 10 years old at the time and had family members living around London, so naturally I was very excited for the whole thing. I got to go to the Olympic stadium to see the Paralympics, which was fantastic to watch) or the family holiday to Sorrento in Italy a few years back (Beautiful weather, beautiful town, not a whole lot of tourists and Pompeii. What else do you want from a holiday?)

Q3: Has there ever been any event or person that changed the way you think or see things in life and if yes which was it?

A: As a person with Aspergers, when I was a kid I was surrounded by teaching assistants who were there to "improve my learning" when all they did was stifle my ability and treat me as a problem waiting to happen. My parents recently told me that they didn't believe I'd pass secondary school, which I did 2 years ago. What they taught me is that I'm the only person who can define me: no label or other person can make me who I am. A rather ironic lesson to have learnt.

A: Off the top of my head I'm trying to remember who died in 2019. I'm almost certainly missing someone incredibly important.

Q5: As a fellow Smash brother, who do you consider the best and the worst characters in the game and who is your favourite character and stage? Also, do you play online? Which game that you remember was the most exhilarating and what is your most proud moment of Smash Ultimate?

A: In terms of best and worse, I really stopped caring about who was good and bad and just decided to have fun with the game. My favourite character to play is Lucas, who I picked up in Smash 4 and felt considerably more fun to control than in Brawl (I also love the buff PK Freeze got in Ultimate, it's so good now), but I've been having a lot of fun with Joker recently. Favourite stage would probably be Momentos: the stage layout is unique, the hazards are relevant but not super intrusive like some stages, and the music is some of my favourite of the new tracks in Ultimate. I don't play online because I cannot be asked to buy Switch Online and I hear the netcode is awful, but maybe I'll try it one day. As for memories, I actually managed to land the spike on Luigi's down taunt, which is absolutely a moment for celebration.

Q6: What do you like about the word “defenestration”? Is there any other English word that you are especially fond of or any word that is specific for British English?

A: Defenestration just rolls of the tongue really well. It also means "to throw out of a window", which is such a specific thing to have a word, yet English has decided to cover all bases. Although it's technically not an English word (I think it's from Scandinavia?), smorgasbord is also a fantastic word, in both language and what it conveys: it implies a board of "smorgas", but seeing smorgas isn't a thing it's just a board of stuff, which is almost exactly what the word means.

Q7: What is your zodiac? Do you believe in astrology and, for example, that each zodiac is associated with specific characteristics?

A:  : My Zodiac is Aquarius, the water bearer. I don't believe in astrology, although I do find The Onion's horoscope very entertaining.

Q8: Which is the greatest challenge humanity will face in the coming decade according to you?

A: Coming together. Political divisions are so clear in so many parts of the world: Trump in America, Brexit here in Britain, Chinese intervention in Hong Kong. It's gotten to the point where we've forgotten that these are opinions and we can't put them aside just to talk to each other. If we don't come together soon, then we can't focus on the important things: like the looming climate catastrophe that is going to be a lot more real once we get to 2030.

Q9: Last time we had you featured you told us you ‘re thinking of becoming a videogame programmer. Fast-forward 2 years today are you still considering in working in the videogame industry or have you had a change of plans? Have you thought of pursuing a career abroad?

A: : I've been coding a project on Unity as part of my coursework for my A Levels. Despite what a few of my friends here may think after my recent venting on one of the Discord servers, I am very much enjoying it and it's been one of the best parts of my A Levels. A career in programming is still a high possibility.

A: Pass my A Levels with flying colours, get an apprenticeship, survive Brexit, and finish up anything I have to do here on the Wiki before I move on.
[Click to Hide/Show Interview] 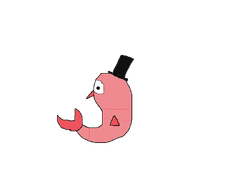 Edmund the Shrimp, Eddie or just Edd for his friends, is a shrimp without superhuman powers, he's a great businessman, but unfortunately has no powers, just has a fabulous hat on his head. Edmund is also very rich due to being a businessman.

# Q1: Why is Edmund so outrageously rich?

A) He found a gold-laden Mobian ship that had drowned, that's how he got rich.

# Q2: Is he a member of the Rothschild family?

A) Obviously not, he's a shrimp.

# Q3: Being so disgustingly stinky rich, what is the most expensive thing he owns?

# Q4: Has he ever been poor in his life or was he rich from the beginning? Also, what are his views on poverty?

A) Before being rich, he was in an average financial situation. He thinks all the poor are lazy who don't get a job because they don't want to.

# Q5: How come he has no enemies when he possesses so much power and wealth? Sounds really suspicious to me.

A) He lives on the bottom of the sea, Mobius's sea is not as bustling as the surface, he doesn't even know Eggman.

# Q6: As a proper gentleman who fights only with slaps, does he have a strong British accent, likes drinking tea all the time and solves all his issues with others with a duel?

A) Of course, every respectful Gentleman has to have a British accent and drink tea all the time.

A) His wallet is actually a portal to a pocket dimension with unlimited space.

# Q8: Has he ever sought treatment for his infliction?

A) Already. But the surgeons said he was a lost case.

A) Sure. With money you buy more money.