Sonic Chronicles 2: The Travel Tales is an upcoming FANMADE game created by AmyRose14 on the SNN, or Superstar101rose on Youtube.

Silver and Mirage are the only other playable characters that get cut out of the game after a few chapters, or if you put in the wrong things for a conversation.

Note: Some characters that were going to make a major part in the story were moved to cameos in the middle of production due to time limits:

when selected from the menu screen, this is what you will see:

You would hear: "I'll try my best!" from both Tails and Cream..

PS: When in gameplay, you can type or say what you want the character to say. The cutscene is made by the game, but the characters' dial

Next....there would be a cutscene showing Eggman with a crown on his head, saying, "There is no doubt that I have ruled the world!!" Then, Team Sonic appears to be infiltrating his base, but just as they grab the Chaos Emeralds, Dr. Eggman uses a teleporter, and teleports Amy, Sonic, Tails, and Cream to the Green Hill Zone, and that's the end of the cutscene. Then, you see Sonic, Tails, Amy and Cream in the small forest of Green Hill Zone, near the waterfall. Sonic will say, "What? We lost?" Amy will sigh, and whisper, "Yes, Sonic. We...lost." Cream will start to cry, and Tails will comfort her, but adds, "Sonic! What about Mirage??" Sonic then gasps. Mirage was the one who was always the supporter between the duo. Ever since Sonic first met Tails and Mirage, they had been best friends. Sonic then clenched a fist. "If Eggman did something to her...." He released his anger in a punch at a rock. Cream then jumped and said, "How about we split up! Sonic and Amy can go to Central City to find Mirage, and Tails and I will head to Mystic Ruins to find Big. He's part of Team Rose, and we can't leave him in Mystic Ruins!" Tails and Amy nodded happily, and took off. "Come on, Sonic!" Amy cried happily. Sonic smiled and took off with his friend.

Once reaching the bridge between Central City and Green Hill Zone, Sonic and Amy notice that a nocturne scout, Dakite, was walking around, patrolling the area. Amy gasped. "Sonic....what?" Sonic was too busy fighting the scout and this is the first boss battle.

After defeating Dakite, Sonic carries Amy over the bridge to Central City, and a mission pops up on the screen, saying, "Beat Tails and Cream to the completion of the mission. Tails and Cream will take 4 full days, and starting from now, you will be on the clock all day and night, trying to find Mirage." This is a time mission. Do not change the time at all, even if it is Daylight Savings Time, because if you bring it back, it moves to the next day, it you move it forward, it moves to the next day! This is the end of part one to the first chapter. There are 3 parts to every chapter....

Once reaching Central City, the entire city is in ruins. "How can we find Mirage here?" Sonic sadly cried. The two hedgehogs had to run throughout all of Central City, and it was quite big. Amy sniffled. She was tired of Sonic forgetting her love for him. Yes, they somewhat fell in love on the last journey, but Sonic had probably forgotten. Sonic was running around when he saw Tails' workshop. Tears streamed down his face. "Mirage...." he sobbed. The place was in flames. The entire workshop nearly collapsed. Sonic burst into the room, only to find Mirage.... "Mirage!" Sonic shouted. He picked her up, and started charging past the flames. Sonic felt like he was about to pass out, when Mirage groaned, and whispered, "Sonic...." and passed out. Sonic went even faster, and blew the door away, jumping as the workshop collapsed. The two of them tumbled down the hill, and landed at Amy's feet. Mirage was holding onto Sonic when she noticed she was free. "Sonic, oh thank you!!" she cried, leaping into his bruised arms. Sonic was so happy she was safe. "Mirage, I would've been crushed if you had been killed in the fire. What happened??!"Sonic asked, dusting his friend off. "Dr.Eggman, wants to marry me again! When I refused, he set the workshop on fire! I tried to run, but the door was blocked. I didn't know what to do. I thought it was all over, and Miranda and Marisol were almost trapped, but they left on your adventure. I need to find Tails. The only thing that I really could save was Cosmo...." Mirage sadly sighed. Sonic smiled as she pulled out the plant, created by Cosmo before she died. "Well, the two of you are alive, and that's what matters. Come with us Mirage!"

The game play of Sonic Chronicles 2: Travel Tales will feature customized teams of 2 that will work together throughout the game. Some characters will have exclusive access to areas that other characters can't reach. Additionally, the pairing of characters is impacted by how they react to each other. Some pairs will work together and get along well while others will often argue and jepordize the mission so choose wisely. The following is a list of pairs.

Flycisco (Team Vortex) < A vortex is a flaming tornado 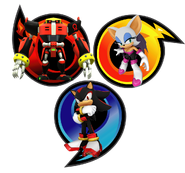 Add a photo to this gallery
Retrieved from "https://sonicfanon.fandom.com/wiki/Sonic_Chronicles_2:_The_Travel_Tales?oldid=1799381"
Community content is available under CC-BY-SA unless otherwise noted.