Solstice is a cryokinetic canine of some sort. He was your average dumb teenage male (dont take offense to that), and he was generally liked....but he made some bad choices. This, eventually, led to his death.

The Solstice that is known now is almost completely different from the one known before. Prior to his death, Solstice was a regular champ who did what most kids liked to do- party, establish good friendships, and generally have a good time. He participated in different sports, such as rugby and basketball. His intelligence was questionable- average grades and whatnot. Solstice had many friends. Unfortunately, they went down the wrong path, and Solstice kicked himself down it as well. Willingly, too. While drinking and drugs were out of the question, he did find new passions- fightning, back-talking, overall hazing those who were inferior to him. These things were key factors to his end. After that, however, he manifested as a spirit. Realizing he was technically in a purgatory of some sort, he knew he had to make a change. He forced himself not to lash out at anyone- that was a wasted effort, though, as he wouldn't have been able to anyway. He wasn't quite strong enough to communicate with the living just yet. Anyway, he became, of course, less social. If still alive, he'd probably be considered socially awkward. Despite that, he became gentle and calm, polite and still loyal to his family, and lost his interest in fighting (he actually became a pacifist), yet has an aura that practically leaks out sadness and lonelyness. If only there was somebody for him to talk to..

Solstice is, and always has been, a cryokinetic. His cold powers include:

Strangely, this "ice" that he creates is as invisible as he is. Solstice's other powers include packing his atoms together and pulling them apart, which allows him to walk through solid substances. Levitation is also another ability he gained as a spirit.

Solstice's ice is, however, tangible, and it is actually very vunerable. Any exposure to warm temperatures will cause it to melt immediately. It is assumed that, if interacted with, Solstice would be too trustworthy of others, and he'd be easy to take advantage of (because really, all he wants is some affection!). He also tends to look out for others rather than himself, which may or may not have negative consequences.

Relations With Other Characters

(You'll have to ask about this.)

Soldier's Orders - This theme describes the conflict between Solstice, his family, and his Moebian counterpart (respectively). 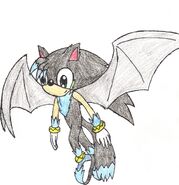 Add a photo to this gallery
Retrieved from "https://sonicfanon.fandom.com/wiki/Solstice?oldid=1578647"
Community content is available under CC-BY-SA unless otherwise noted.