Start a Wiki
This is an article about Solomon the Hedgehog, a concept design of Silver made by SEGA given a story by Spyken (Emidikun on DeviantArt). 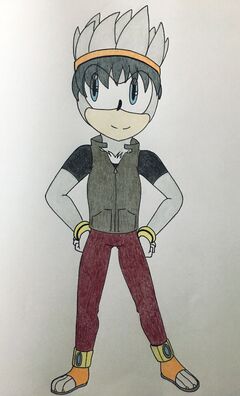 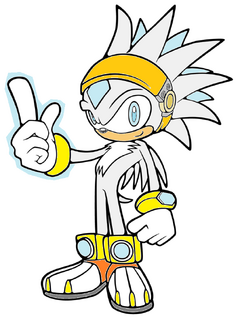 Solomon the Hedgehog, also known as Surge the Hedgehog and Agent S.U.R.G.E., is the father of Spikes and Silvia the Hedgehogs and husband of Jane the Hedgehog. He is a powerful psychic, and if his words are to be believed, the strongest one alive.

Solomon is a light grey hedgehog with light blue eyes and a little darker irises. He also has a light nougat muzzle and white chestfur.

While he was in hiding, he wore a brown vest with a brown pants and shoes. He also wore a light brown bandana around his neck. He used a device to make his muzzle and fur appear darker as well as his hair, which now falls down and reveal his hidden quills. His eyes also look darker due to lenses.

After coming out out hiding his fur got a little darker and he returned to his previous appearance, wearing his old gloves and shoes again. Instead of the headband however, he wore an orange bandana on his head and left some hair framing his face, obscuring the mark on his forehead, unless he uses his powers. He also wears a short sleeved grey vest with black sleeves and dark red pants.

In his younger years, he wore white gloves and orange/white shoes with yellow accents. He wore a orange headband keeping his hair and quills upwards. Some of his quills turn light blue when activating his powers. He wore yellow cuffs on his gloves and shoes, which store his continually building power.

Solomon has a very playful personality, liking to play around with both friend and foe. He is found smiling most of the time and can always find a moment to crack a joke. In battle, he also likes to play around, but can get serious if needed. He is also a proud man, especially of his powers and therefore likes to show them off.

He is a very doting father, liking to play with, prank and spoil his children. Likewise, harming any member of his family is a very easy way to earn his wrath, and if such is the case he will not show any mercy towards the offender.

Solomon the Hedgehog is the son of Sullivan the Hedgehog and older twin brother of Martha the Hedgehog. Their mother Emily the Hedgehog died shortly after their birth. He and his sister were born in an era of relative peace and despite their widowed father's position as a major Freedom Fighter, still had a relative normal childhood. From a young age the twins shared a mental bond, being able to communicate with eachother over short and long distances without needing to speak, but Solomon discovered that he possesed other psychic powers that his sister lacked.

Ever since he was little Solomon dreamed of nothing else but also becoming a Freedom Fighter when he was older. When he was old enough, he quickly joined the ranks of his father's squadron, where he quickly became one of their best assets due to his skill in using his powers. He gained much infamy during this time, being the dreaded for their ennemies and managing to inspire hope even to veterans on the field. This was to such an extent that whenever he appeared in the midst of a battle, his comrades felt like a sudden surge in power, resulting in his nickname; Surge. It was during this time that he met his future wife, Jane.

The glory days of the Freedom Fighters were since long over though. Some years after he became active, the Freedom Fighters as a whole all over the world were declared illegal. The act of protecting civilians had become an exclusive task reserved only to government officials and GUN. Any vigilantism was heavily condemned, with some acts even risking imprisonment. At the same time, some people started hunting down members of the Freedom Fighters. Those who didn't get caught joined GUN or went into hiding. Not wanting to be bound by rigorous codes of conduct and wanting to have a family, Solomon opted for the latter. Sometime later, he and Jane were married and had two kids; Spikes and Silvia. The four of them had a pretty nice life together.

His family were suddenly kidnapped one day, because a rogue organisation wanted to experiment on his son for their Project Sonic Reborn. He, his wife and Silvia were at first held together in a cell, but were still treated rather nicely, until a certain discovery caused them to be transferred to a labor camp.

At the camp, Silvia and her parents were separated from eachother. While they were sent to the deepest levels of the site, Silvia remained on the first . When she asked for her parents' whereabouts or why they were even separated in the first place, she was always met with silence. The reason was that her parents' identities had been found out and their captor Eggman Nega had plans for them.

After escaping inprisonment, he went on a journey to depose the current GUN commander, having discovered he was working closely with Nega. He decided with Jane that it would be better if she returned home for their children, and not tell them the truth just yet. Using the information he had gathered he went to liberate every of his old comrades all over the planet. During many of these trips he crossed paths with his son Spikes, even teaming up sometimes, but never telling him who he was, always using his old nickname.

When he had found them all he went directly to GUN to confront the corrupt commander. Still believing he had the upper hand, the commander ordered him arrested immediately, while mocking him him for his supposed arrogance. After defeating the first wave of ennemies sent his way, he started to explain just why he was there; to put HIM under arrest. Still sure of himself the commander scoffed at this, calling him a fool. When he ordered his other men to attack, Surge asked the soldiers if they didn't think it was weird that some of their colleagues dissappeared suddenly.

Appalled the soldiers ceased their attack on him. Surge continued saying that thier precious commander was disposing of everyone who was defying him or knew a bit too much. The commander, irritated, ordered his men to not listen to those lies and to just attack him, but at this time Surge used his trump card. Suddenly dozens of holographic screens appeared before them, with all the missing soldiers and former Freedom Fighters behind them. Faced with undenialable proof, the commander tried to weasel his way out of this by claiming they were all criminals and thus had to be locked up. In response the various screens started projecting conversations the commander had had with Nega, clearly showing his treachery. This resulted in all his men turning on him. In a last attempt to save himself, he set up the elite corps against them, revealing them to be brainwashed. They poved to be more than a match for the regular troops and it seemed like they were going to win, until someone shouted something that caused them all to freeze. That someone was Shadow, who also revealed himself to be Surge's informant.

After officially deposing the commander, Shadow took over the job, with Surge as his second-in-command, taking the name Agent S.U.R.G.E.. He returned home afterwards, finally reuniting with his children.

Solomon is a very cunning and charismatic leader always managing to inspire those he leads with words of encouragement. With his experience as a Freedom Fighter he can also exerce a degree of authority to others, which greatly helps at his new job at G.U.N.

Will of iron: Solomon has a very powerful will, refusing to break down even after the numerous taunts done to him by Eggman Nega over the course of the several years he was held captive. Not even being used as a living computer managed to suppress his will, as this was when he actually started to make his plan with Shadow. This allows him to overpower weaker-willed psychokinetics.

Psychokinesis: Solomon descends from a long line of psychokinetics, but he distinguishes himself by being one of their most powerful.

1 of 5
Add photo
Retrieved from "https://sonicfanon.fandom.com/wiki/Solomon_the_Hedgehog?oldid=1855001"
Community content is available under CC-BY-SA unless otherwise noted.