Why not check Sonic News Network for information on the original Soleanna?

"Soleanna, the City of Water. It has its own constitutional monarchy, y'know. It's main industry is tourism and crafting precision machinery."
—Rouge the Bat speaking with Nage the Chameleon.[Author]

Soleanna is a mainly human-populated kingdom located on a cluster of islands in the middle of the ocean. Male rulers are named "Dukes", females are "Queens". Though the country does have its monarchy, various Lords, such as Regis of Castle Town and Ringo of Helios, do exist as sub-rulers. Their god is Solaris, god of Sun who appears in various places n Soleanna as a symbol.

Soleanna appears as a starter available fighting stage representing the Sonic universe. The player fights inside a boat which slowly sails around Soleanna. Dancers, fireworks, people and Elise herself can be seen in the background.

Soleanna is an independent city-state in the Kingdom of Romath. It has not appeared in any stories yet.

The Kingdom of Soleanna has actively monitored and occasionally raided the Cult, on the grounds of being "evil" and "dark", and claiming that the small group worshiped devils. Later, Soleannan forces were responsible for the Cult's destruction after the latter assisted a family of Mobian bears in moving away from Soleannan borders and towards the Fearful Caverns, where the Dark Clan of Voidstar lives. The family's youngest daughter, as well as the Cult leader and most of his followers, were among the casualties. 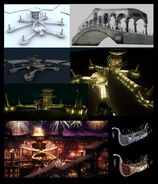 Add a photo to this gallery
Retrieved from "https://sonicfanon.fandom.com/wiki/Soleanna?oldid=1505271"
Community content is available under CC-BY-SA unless otherwise noted.