Darkest Shadow, the author of Snowflake the Hare, considers this page to be unfinished. As such, some sections may change.

The night sky looks really beautiful with all the snow falling down. 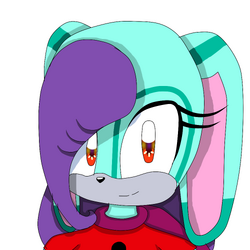 Snowflake the Hare is a character created by Pianoteen. She is a hare living in Freshsnow Town and is a part of the competitive dance team on the Mariala Youth Stars Dance Company.

Wynter Crystal Frost is a sixteen-year-old hare from Freshsnow Town, living with her parents. She was born the Frost Clan, a clan that specializes in all kinds of forms of cyrokinetics. Because of her roots, she was born and raised to be a powerful cyrokinetic. She normally wields ice from a staff that was passed down to her by her grandfather, but her parents try their best to teach her how to use it from her hands.

Snowflake also has a passion for dancing. She is on the Mariala Youth Stars Dance Company, under the direction of Birtha Timone, on her elite competition team. With her team, she travels all over Lacancory, and sometimes places intercontinential, to compete in competitons. She has been a part of the company since she was 8 years old, and has grown really close with her teacher. She has a lot of talent and star potential, and hopes to become a professional.

Snowflake is described as very loyal to her friends. She tries to not let them down and be as useful as possible. When someone needs her help, she'll give it everything she's got to help out that person.

Snowflake is also very well-mannered and polite. She respects every person she meets no matter what they are on the inside or out. She was never forced to have such good manners, she just wants to be the kindest she could be.

She is also described to be somewhat timid and shy. She gets a little frightened by a lot of people who are bigger than her. She also gets scared easily by villains, and pranks. She tries to avoid conflict as much as she can.

Being a member of the Frost Clan, Wynter is born with cyrokinetic powers, but they aren't very strong.

Alyssa the Dog- Alyssa and Snowflake are best friends. They are on the same dance team and love to dance. They happen to be the two top dancers on their team as well. They talk to each other a lot and like to plan hangouts and sleepovers together.

Bloodstone the Hedgehog- Bloodstone and Snowflake are close friends. They are on the same team and love to spend time together. They usually see each other often, even when they aren't at the MYSDC.

Candlelight the Echidna- Candlelight and Snowflake know each other. They sometimes interact, but definitely not always.  Both became friends when Candlelight saw Snowflake's dancing.

Christina the HedgeCat- Though Christina barely knows her, Snowflake sees her as a role model figure.

Ice Staff- A weapon that she had since she was a child, the Ice Staff is her one and only weapon. This item was passed down by her grandfather that he once used. It looks like a giant blue and metal stick with pointy and large ice shards when it goes towards the top. The staff can be used to make ice appear from it. When shooting ice beams, rays or balls, the top of the staff shines and then shoots. When making an ice shard earthquake, she bashes it into the ground.

Snowflake by 1feellikeamonster on dA. 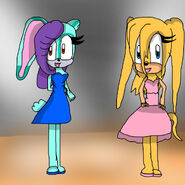 Snowflake and Alyssa at a dance showcase.
Add a photo to this gallery

Retrieved from "https://sonicfanon.fandom.com/wiki/Snowflake_the_Hare?oldid=1748953"
Community content is available under CC-BY-SA unless otherwise noted.