I have the freedom to make my own choices. Reens may be my counterpart but we are nothing alike. I have a brain, a heart, a soul. Don't expect me to act like her.

— Sneer to a friend 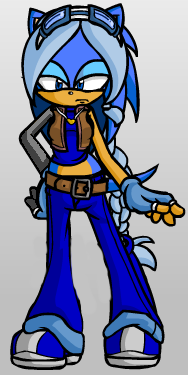 Carmelita Guarre (Paternal Grandmother)
Affiliations
None at the moment
Personal Info
Likes
Teasing Reens (good-natured mostly), fighting, making plans, chowing down on calzones, ticking people off, jewelry (to an extent)
Dislikes
Being mistaken for Reens, going without a plan, anchovies, fighting without a reason to, anything too cute or pretty
Friends
Reens (to an extent), Venders (to an extent)
Romantic Interests
None
Occupation
Mechanic, Part-Time Hero (if it pays well), Waitress (if it doesn't)
Skills and Abilities
Weaponry
Silver daggers, Pyrokinesis
Other Info
IQ
136
Sexuality
Heterosexual
Birthday
June 18th

They say opposites attract, but Sneer always strives to break the cliche. Even though she usually wants nothing to do with her Mobian counterpart, she ends up becoming a potential ally whenever they meet up.

Basically, Sneer has Reens' old outfit and color palette swapped for everything from her clothes to her hair, quills, and fur. However, her heart necklace and gloves are still the same, and her robotic arm is on her left side. She used to wear an orange stud on her right ear, but her grandfather took it out.

As sweet as Reens is, Sneer is the exact opposite. She is extremely cynical, always blaming someone else for her own problems. She also seems not to care if she hurts anyone, including her 'friends'/allies, or herself. She has even stated at one point that she doesn't care if she dies because everyone who has loved her passed away.

However, she cares deeply for her true friends, and would gladly hurt, or even kill, those who would harm them. Only her true friends and those she has opened up to can see the other side of her: a scared little girl who just wants things to stay the same.

She does not share Reens' love of the medieval. However, she does enjoy all things modern and tech-based.

Sneer never really knew her parents, and honestly, she didn't feel anything when they died. However, she had to take care of her younger sister, Josefina. Eventually, Josefina passed away from an untreated knife wound in her side. Blaming herself for her death, Sneer left the town where she was in order to live with her grandparents and work in their Mexican restaurant.

Her grandparents were not the most loving, and they forced her to work grueling hours in order to provide for her needs. After dealing with them for so long, and with the guiding words of a friend in her ears, Sneer finally snapped and left them behind to pursue her own goals.

Despite her blue color scheme, Sneer actually has pyrokinesis, the ability to wield fire. She has a variety of abilities attached to this power, though it is nowhere near as strong as other pyrokinetics.

Though not technically a power, Sneer can use her robotic arm in a variety of ways. She can fire lasers blasts from it and use it as a battering ram. Unfortunately, she does not possess any of Reens' golden heart abilities.

Like Reens, Sneer is a relatively fast runner. Her speed comes to around 120 mph depending on the terrain. Drier surfaces are easier to run upon.

Despite not possessing Reens' golden heart abilities, Sneer is still capable of lifting heavy objects and doing acrobatic stunts, though at a more limited capacity.

When Sneer turns super, she becomes cyber yellow with dark candy apple red eyes. Her heart necklace becomes silver in this form, though no abilities are granted to it. Her robotic arm is capable of transforming into any weapon she might need.

She does not possess a negative equivalent.

Since Sneer cannot rely on physical strength alone, she has been training in various styles of martial arts, including judo, jujitsu, and taekwondo. She rarely uses these in combat.

Sneer's grandmother taught her how to make fresh tortillas for their Mexican restaurant, and ever since, Sneer has been an assistant chef when she isn't being a waitress. She has also been known to make food and bring it to the homeless, albeit with not revealing herself.

Sneer has the ability to sense different forms of energy ever since she touched some Anarchy Beryl and became Heartbreak Sneer. She can sense anything similar to Chaos energy. If the energy is too strong, she will have a massive headache.

Though Sneer's greatest power, it is also her greatest weakness. When she loses concentration, the flames can grow to immense heights and temperatures. They are also tied to her emotions, so if her emotions are out-of-control, her powers will follow suit.

Sneer suffers from slight deafness due to an untreated ear infection as a child. She is still able to hear, but some things must be repeated multiple times in order for her to hear them.

Unlike Reens, Sneer does not wear contact lenses or suffer from dyslexia.

Unlike Reens, Sneer needs to use Anarchy Beryl (or an equivalent) to turn Super.

Any suggestions on how to make her better? Message me on my wall, blog post, or comment down below!

Retrieved from "https://sonicfanon.fandom.com/wiki/Sneer_the_Hedgehog?oldid=1847676"
Community content is available under CC-BY-SA unless otherwise noted.