Snap the Puppy is a 7 yr old golden retriever/lab puppy who is a master with technology, and has superior stealth that allows him to get his technology for the team in a variety of ways.

Snap doesn't really do much to help the team out in terms of supernatural powers. What he does do, however, is construct the machines that help his and Team Ice's missions to save the world. He also has master stealth, which means he can sneak in anywhere. He can also use bombs as boxing gloves, so he can just punch through foes without breaking a sweat. He is of the Power formation, which means he has strong power in his machinery. He can also build and ride hoverboards, most notably his "Bomb Flier"

He isn't shy, in fact, a little curious and adventurous is his type. He's never one to stay away from danger, unless it is truly terrifying. He is one of the few people who can annoy his team, but he never, ever, is cocky when it comes to adventures. He usually calls Lightningbolt and Spikeball "Lights" and "Spikes", respectively.

Attack: He runs on the track, taking out his signature bombs and hitting anyone he passes

Description: This board is very... techno. It has heaps of tricks and secrets, enough for Snap to win a race in one click of a mouse!

I'm better than you!-when passing someone in a race

Let's go!-when bouncing off something in the gravity dive

Snap giving a thumbs up. 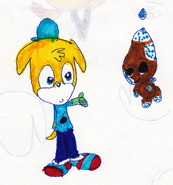 Retrieved from "https://sonicfanon.fandom.com/wiki/Snap_the_Puppy?oldid=1819412"
Community content is available under CC-BY-SA unless otherwise noted.