"You deserve to live in this universe for a reason. Sure, my life was screwy when I worked for Eggman but... I'm glad to have you by my side"
—Sly

Sly is calm most of the time, but can get mad if she gets teased. She expects people to respect her authority when she is in a fight. She usually likes doing things alone, and like Blaze, doesn't have the time to make friends. When ever someone gets in her way in whatever, she gets the feeling of killing them. Sly has a "soft-side", and was shown when she asked Honey for her to be her sister-at-heart.

Not much is known about her early life. She lived happily with her parents when she was a cub. But after Eggman took them and was going to turn them into robots, she asked him to not do it and eventually sacrificed herself to work for him after saying "If you take my family, you take me". So "peppy and happy" Sly turned into "evil and cruel" Sly. She was one of Eggman's best henchmen,due to her abilities. But after he accused her of taking the Sol Emeralds, she rotted in prision. For years Sly has been thinking in prison how to show him revenge. After someone comes and takes notes about her, she manages to escape and seek revenge on Eggman (after 3,000+ years).

Sly has different skills, like any other martial arts master. Like some are jumping, slicing, and punch. If Sly has enough chi (good energy), she can be able to levitate things with her mind. This took her half of her life to master this. She also knows how to go stealth, which allows her to not be spotted. Sly also has a Super Form, Stealth Sly. It allows her to fly and shoot dark-colored fireballs at her enemies. Her stealth is very deadly and can kill someone in one blow. Like Blaze, she uses Sol energy.

"My name is Sly. Sly the Fox."
—Sly introducing herself to Sonic and the gang

"I will not let you escape from ME!"
—Sly chasing someone when they are fleeing from a battle.

"I could have done better"
—Sly getting a C rank

"*grumbles*"
—Sly getting a D rank

"If it weren't for me saving you from the EggPawn, WHAT WOULD HAVE BECOME OF YOU?!"
—Sly yelling at Cosmo

Sly seems to respect Tails, and listens to him. They both get along, and are well partners in combat. She used to call him "two-tails" or something worse, but now she just calls him his nickname. Sly seemed glad when Tails (especially) taught her lessons to be good (so she could seek revenge on Eggman).

Him and Sly don't interact much. The most that they interacted was when Eggbots ambushed the group. Sly was dealing with a lot of them, and could've possiblied died without Sonic's help. He asked if she needed help, but she refused. Eventually, he coaxed her and Sly agreed for his help. They also interacted after Sly said her skills, which then Sonic said "you seem like Espio ".

Sly highly respects Blaze. It is shown that after Sly bows down and calls her "highness" (which Blaze didn't seem to mind). They don't really interact that much.

Sly used to hold a grudge against Cosmo. When Cosmo tried to talk to Tails when he was teaching Sly lessons, Sly said "Go talk to someone else, plant girl.", which somewhat hurt Cosmo's feelings. But after her and Tails were discussing something about Sly, she attempted to kill Cosmo (even though she saved Cosmo twice). They eventually get along and become friends and like Amy and Cream, became sisters-at-heart.

Sly used to be allies with the evil genius. She did all of his dirty work, but was glad for it. But after she has gotten betrayed for taking the Sol Emeralds, she hated him and has seeked revenge on him. 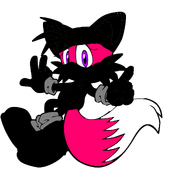 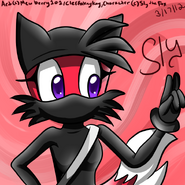 Taily wallpaper (made by FlopiSega)

Sly's icon (made by DaisySonicFan2000)

Sly the Fox sprites (by Mewkat14) 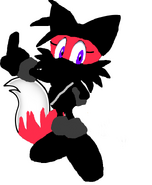 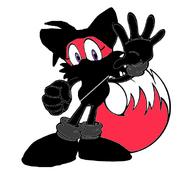 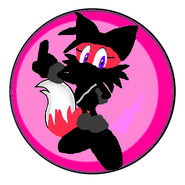 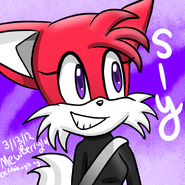 Sly unmasked by Mewberry101
Add a photo to this gallery

Sly the Fox, on the ASFW

Retrieved from "https://sonicfanon.fandom.com/wiki/Sly_the_Fox?oldid=1851649"
Community content is available under CC-BY-SA unless otherwise noted.