Slash is a no nonsense, do what you have to type. She gets angry easily and won’t tolerate goofing off when a mission should be going on. Along with this she gets restless easy when people are just standing around talking, especially when there is something that needs to be done. Her approach to both fighting and life is straight and to the point and she doesn't have much tolerance for planning. Consequently she often acts rashly or without thinking. Her reckless behavior sometimes borders on insanity, for example how she will go insane whenever she hears the song “Row, Row, Row Your Boat” and will make every attempt to destroy it’s source. Despite all of this she is good at her job, always getting her target. She is well aware of this and is confident in her own ability. She is not very feminine and scoffs at some of the things other girls do like taking really long to do their hair. Notably, she is far from emotional and dislikes romance and talking about feelings. Although she seems cold, deep down she really does care and has a strong sense of morals. She always keeps her word. The negative side of that is that she also tends to keep a grudge. She bears a strong hatred towards any of her enemies.

Slash is a light red furred cat with bluish lavender eyes and off-whitish fur on her stomach, face, and the tip of her tail. She has had a scar on her left cheek since she was very young. Her ears aren't straight triangles but sort of curve out to the sides. She has fluff on the sides of her face and some on the tip of her relatively thin tail.

Slash wears a black jump suit, a belt with a gold buckle, black combat boots, and grey gloves. The gloves have small slits in the finger tips that allow her claws to come out. Hidden in her left boot she wears a gold charm bracelet that commemorates her father's war efforts.

Slash stands rather stiff most of the time, in a strong position. She stands her ground and frequently takes on an aggressive or defensive posture.

Despite having a more femine and cat-like pitch, Slash speaks in a low tone. Her voice is also somewhat gruff at times.

She has long tough claws that are retractable. They are roughly 5 in. long and as strong as metal. In addition to her great physical strength, being able to lift in the area of 500 lbs, she also has the good reflexes and other abilities that come with being a cat. Her cat abilities also include agility and being able to jump from high up. She also has some knowledge of sword fighting after being taught by Evo the Hedgegoose at Katana Camp.

Slash grew up with very strict parents. Her father taught her to fight from a young age. The scar on her left cheek came from a particularly rough lesson. After that she determined not to let her guard down again. When she was older and the family was short on cash, she went out to support the family. There was a bounty out on a dangerous criminal, and after successfully capturing him and receiving the rather large reward, she became a bounty hunter full time.

One day an anonymous source contacted her offering to pay her if she would capture Macro the Giant Hedgehog. Despite the suspiciousness of the offer she took it anyway and headed out. She spotted her target talking to Klinx the Weasel in an alley. Before she could head over there an exceptionally eager salesfox came up to her. After she finally got him to go away by yelling at him Macro was gone. But she spotted Klinx still in the alley. She ran up to him and demanded the location of Macro. Klinx however wanted her to pay for the information. Already having been mad she extended her claws and threatened Klinx. Then she took him with her to find Macro. When they found him there was a confrontation, but they eventually found out that Slash had been set up by Eggman. At Klinx’s direction the three joined together as a team to take down Eggman (*cough*Sonic Heroes*cough*). She now lives in Station Square with Klinx and Macro.

Since meeting Klinx and Macro, Slash has also made other new friends, as well as some rivals. She maintains her career as a bounty hunter, this job being the main source of income for the team. On one mission she found herself trapped in a haunted house which she was determined to get to the bottom of. Klinx and Macro have talked her into going to quite a few parties and other social events that she wouldn't have normally gone to. She has also entered some fighting tournaments and attended Katana Camp where she learned to sword fight. She went with her new found friends when they rescued another friend, Kimiko who had been kidnapped by Scourge and Fiona. She was also with them when they were trapped in the labyrinth. Most recently Slash found herself far in the past for unknown reasons travelling on the Oregon Trail to Oregon City. It was later revealed that the whole thing was a plot by The Cat Squad, aided by Dr. EggPlankton. They escaped, but Slash said she would get them one day.

Although Klinx and Slash are teammates and friends, they don't always get along so great because of their differing views. Slash gets frustrated with Klinx frequently.

Slash and Macro are good friends and allies. Slash wants to train Macro to be a fighter, although he doesn't want to.

Evo is one of Slash's few close friends. They work very well together.

Fist is a possible rival of Slash do to the incidents at a Truth or Dare game. This included Fist taking a picture of Slash in her underwear and looking at it.

Slash bears strong animosity toward Eggman after he tricked her into hunty Macro as a bounty, with no intent in paying her.

Kai is a bounty hunter like Slash, but from the opposing side.

Slash is not a fan of Streak's obsession with romance or her sometimes overly upbeat attitude. But she tolerates her since they are on the same side.

Being the complete opposite of her, Slash absolutely can not stand Slish. She considers her a "touchy-feely-ninny" and thinks the way she behaves is completely ridiculous.

When Kudari was stuck in this zone after her former best friend stranded her here, Slash made a promise to Kudari's mother to help her get back and protect her.

Nerin is an ally of Slish and the two of them are constantly going against Slash and her teammates.

Slash was a bit reluctant helping Sparky and putting up with his happy manner, but she warmed up to him. Sparky attempted to show Slash how to have fun, and it somewhat worked.

Ditzy is Team Weasel's annoying and dim-witted neighbor who lives in the same apartment building as them. Slash absolutely can not stand him and has on numerous occasions desired to chuck him out the window.

Zappy is Sparky's Moebian counterpart, and has a distinct hatred towards Slash. Slash hunted him down with the help of the rest of Team Weasel and Sparky, mainly because of the bounty on Zappy's head.

Lost in the Labyrinth

~"Hmph, meditating. You accomplish nothing just sitting there." - (Truth or Dare?)

~"I know plenty about people like you. You're arrogant and everything's a game to you!" - (Elemental Tourney)

~"Bored? This is not for entertainment. This is a serious mission!" - (Evil Kimiko) 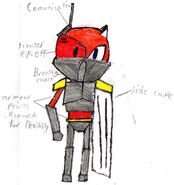 Slash in armor by EpicPIE, Epic's Message: "I Woke Up In The Middle Of The Night, I Had Nothing To Do, So I Worked On This"

Slash in Anime style. Drawn by EpicPIE, colored by Maryxgil

Slash in SRB2
Add a photo to this gallery

Twenty years in the future, Team Weasel has retired. But a new threat posed by Nerin, who is trying to build something much better than the Cat Squad, causes Slash to form a new Team Weasel. Her new mission is to train the young recruits.

If anything, time has only made Slash more serious. She has seen many things and been through many fights. Consequently she has a better reason for her 'no nonsense' attitude than she did previously. She understands the gravity of the situation when her recruits do not. One thing that has changed about her is that she is a lot more calculating and strategic, she's now less likely to act without thinking. She has also come to realize that brute force is not the solution to every problem. Despite this, her temper is still a bit of an issue for her and she can come off as grumpy.

Due to many years of fighting she's a lot scruffier looking and has several new scars to speak of. These include a missing bit of her ear and a scar over her right eye that causes it to be squinting most of the time. There are various minor scars all over her body that aren't normally seen.

She wears a leather suit with a white V marking on the front. Her boots have a smoother style than her old ones and have gold buckles. The most notable item though is the blue military coat she wears, which belonged to her father.

Slash has many of the same abilities that she has always had. The difference is in the way she will use her techniques. She relies more on strategy now than simply brute strength, opting not to just simply charge into an attack.

Retrieved from "https://sonicfanon.fandom.com/wiki/Slash_the_Cat?oldid=1484385"
Community content is available under CC-BY-SA unless otherwise noted.