Skylar is owned by SatAM-Junkie. Please do not steal him or his concept without permission... I worked a lot on him.

Wait, you may be looking for Sky Captain.

Skylar (Sky for short, or lovingly nicknames "Sky-Sky"), is a over 70 years old male Combat Jet AI and mechamorph. Skylar is based off of a videogame character named Sky Captain.

Skylar, unlike Sky Captain has discarded his past and moved on as a partner of Renegade. He has designed himself to look like a jackal and gave himself a red paint-job. He wears a red armor over his body with golden markings, as well as boots, that amusingly look like paws. He also has a communicator on his left ear. He has darker blue hair which reaches down to his shoulders. Unlike Sky Captain, Skylar also changed his voice to sound extremely similar to MORPHEUS from the movie MATRIX.

Skylar often tries to hold back his agressive temper, but once and then he ends up yelling at his friends when he doesn't mean to. Otherwise he's hostile, but he's working on gaining more social skills. He often tries to help, ending up messing things up even more. He's mature and serious most of the time.

Skylar, hence his name, REALLY enjoys flying. Although he also has a liking for conquering the world with his hovertanks and jet-choppers.

The first thing Sky Captain would HATE is being annoyed by something or someone. He also hates being reminded of his violent past.

Skylar, known as Sky Captain in the past, is an advanced jet AI, a nearly perfect combination of smarts and firepower. Even though his age, he is still a very advanced and deadly war tactician. 75 years ago, Sky Captain was created by Prof. Gerald Robotnik under the command of the MAFIA, a similar organisation to GUN.

Gerald soon realized Sky Captain wasn't afraid of anything and he strived for perfection. During his first flight, he crashed and was taken back to the facility. Gerald would notice Sky Captain feeling some sort of worry for him. After (accidentally) shooting Maria's pet-rat, thinking it was just vermin, Gerald got angry and abandoned Sky Captain for weeks. Irritated at his creator missing, he attempts to move out of the harbour, hearing two people talk about his project being scrapped, which would have Sky Captain soon end up as scrap metal.

Snapping, he goes on a complete rampage, murdering a hundred of people working in the facility before Gerald was able to deactivate him.

Even though the GUN general requested for Sky Captain to be instantly scrapped, Gerald, still caring for Sky Captain somehow, had him taken to the Space Colony ARK, hiding him.

Waiting almost 70 years for Gerald, Sky Captain grew sick and tired, losing any emotions he might have developed and broke out of the ARK, heading to Mobius to make the entire world his and show his power and bloodlust to anyone, so they may fear his name.

He lost terribly in his first battle with his "replacement", Renegade, who wanted to tear out his AI and lock him away, but an Eggman Robot in disguise punches Ren across the ground and took the AI away, as Eggman knew the AI would be useful for him and built him a new body, based on Renegade's concepts, making Sky Captain a second mechamorph as he returns to his battles with mankind. Sky Captain pretty much teamed up with Eggman, making both of them a remarkable threat. After a long battle of life and death between tanks, jet-choppers, GUN and Eggman robots, Renegade was able to convince Sky Captain into surrendering.

Ren: "I dont want to fight you SC. But I can't let you do this to yourself... You're blind by rage and fury. Yeah you might have gotten pushed to the back... But one thing about experiments. Someone always goes back to improve what's been done. If you would've been patient, someone might've fixed you up... so you can FEEL what we can!"

Skylar: "But Gerald never came back for me... HE WANTED TO IMPRISON ME FOREVER!"

Ren: "Might not have been Gerald but it would've been someone!"

Ren: "IF I WAS THERE IT WOULDVE BEEN ME!"

Skylar: "I hightly doubt that."

Ren: "You have so much potential... you're WASTING it... I know you're gonna betray Eggman... and Eggman's gonna betray you. He probably put a 'kill switch' in if you decide to turn against him... I can remove it. I Can't fix you then... but I can fix you now!"

Skylar: "Why do you want to help me this badly?"

Ren: "... Dont waste your life like I did on pure rage... I did... and I lost all I held dear to me. Do you remember the city Rivadegs? Honestly nobody does remember... it was wiped off the face of the map... because of me. I lost myself to my rage and fury... and I lost my home, my family, my friends... my life."

Sky Captain ended his slaughtering and teamed up with Renegade, but he didn't tell Eggman, since he could spy out to base for Ren, but he ended up being caught by Eggman, who threatened him to lock him up forever. This made Skylar snap into an out-rage, going bezerk in Eggman's base, nearly killing Eggman himself, but he manages to blow Skylar away with an EMP-Ray and managed to escape.

Skylar then left the base and re-united with his "father", Gerald Robotnik and met the Kitsu-Twins, John and Rita, got himself a red paint-job and a new voice. Renegade however, feeling sorry for Skylar being locked up for so long, left and went to one of Eggmans older bases, the one Rita was created in to create another woman out of bio-material, lovingly naming her Miko, giving her tactic abilities and a high intelligence level. Skylar and Miko soon became good friends before, later, becoming Rivals and a couple at the same time, getting married at the same time Ren and Rita finally got married.

Even though Sky Captain has been created by the same person that had created Shadow the Hedgehog, he and Shadow have never met, nor have knowledge of eachother.

The Powered Mini-Gun is a large Mini-Gun. It is the least powerful weapon Sky Captain has in his weapon iventory. He fires it from his right hand.

The Mortar Launcher fires oval yellow/blue mortars. One at a time, but when in a power boost, for example when he is panicking or angered, he can manufactore mortars that split into four before hitting the target. They are fired from his back.

Skylar is now married to Miko with two children, Blu and Naru.

The jackal is a symbol of the deathbringer, Anubis. Skylar effectively uses this species, due to the big ears, which can easily pick up a sign of oncoming attack as well as the nose, which can pick up any unusual or interesting scent. Skylar, being a mechamorph is very hard to beat if you don't know what to exactly do. His body is made of a collection of nano-bots. If you hit them, it won't do much damage and Skylar would just heal back up. He can also use materials like metal to create something completely new out of it, but he needs a few seconds and it drains some of his energy sources. He uses it though to create Tank and Jet-Chopper units. Even after teaming up with Renegade, he remained as a jackal, only getting a red paint-job.

Skylar with his arm morphed into a chaingun

Sky Captain before his AI was transferred to his mobian body. 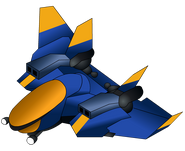 A improved version of Sky Captain that Skylar changes into when being airborne.
Add a photo to this gallery
Retrieved from "https://sonicfanon.fandom.com/wiki/Skylar?oldid=1084011"
Community content is available under CC-BY-SA unless otherwise noted.