"First thing you should know about Sky the Hedgehog: when I make a promise I always keep it."
—Sky 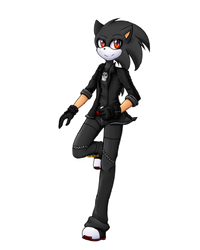 Sky is a person who does not think before acting. Also, he is childish, arrogant, and a little self centered as well as pretty friendly. He respects the people he challenges along the way. Sky is always a risk taker and puts his life on the line before anyone else. Other than that, Sky is nice and sweet and a really good friend to his friends and rivals.

The name's Sky, Sky the Hedgehog

They called me Sky...

I'm always there when a friend's in need....

Try to keep up.

Not on my watch.

Retrieved from "https://sonicfanon.fandom.com/wiki/Sky_Sybrix_the_Hedgehog?oldid=1837518"
Community content is available under CC-BY-SA unless otherwise noted.