Sky Armor is an old male Skarmory apart of Rogue Squad, and the new lookout for the Alliance since Sky the Falcon's death. He temporarily served as a Storm Fighter during the Great Rebellion. 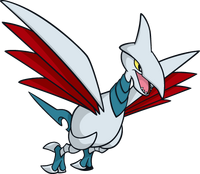 Sky Armor resembles an armor-clad bird with a silvery-white body, talons, and head, a dark gray neck, tail and feet, red blade-like feathers on his wings, black eyes with yellow sclera, and three talons on each foot(two in front and one in back)

Sly Armor is wise and stubborn, and still has a sense of humor despite his advanced age. Also, despite his origins in the villainous Shattered Army, Sky Armor has a strong loyalty to the Storming Alliance.

The Heart of a Warrior: Sky Armor does not physically appear, but is mentioned to have returned to Austin's Storm Fighters before their departure to the Mystic Jungle alongside a Braviary loner named Redwing.

After the Blackout: After Alex suffers a nightmare from Mephiles the Dark, Sky Armor is kept around as lookout and alerts the current Construction Crew of Dark Enerjak's return(because of Infinite's meddling and the creation of a clone), and attempts to help them drive him off with Flash Cannon after Markus' back is injured.

Sky Armor's current Ability is Sturdy, but he can also somewhat utilize Keen Eye, as he has incredibly sharp vision.

Despite his advanced age and his heavy body, Sky Armor is a silent flier, and has powerful talons. He is capable of lifting someone as big as Eli the Jackal with ease.

Being a Steel-Flying Type, Sky Armor is weak to Fire and Electric-Type Pokemon.

Sky Armor is the first Pokemon to have his name split into two, the second being Ice Fang the Lycanroc.

Retrieved from "https://sonicfanon.fandom.com/wiki/Sky_Armor_the_Skarmory?oldid=1802092"
Community content is available under CC-BY-SA unless otherwise noted.