Start a Wiki
This is an article about Skully the Fox, a character created by Horus-Trickster-King on 01/26/2015. 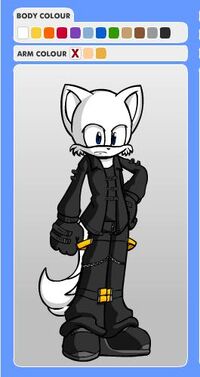 Anyone calling him his full name

Can use nunchucks with deadly accuracy
Powers
Clairvoyance

Skully is a pure white fox with brilliant blue eyes.  He has large ears, and a scrawny grame, suiting his umbrakineisis.  His normal attire is a black jacket over a black undershirt, black gloves, black pants, and black boots. His tail is very bushy, and has an off-white tip. When using his umbrakineisis, Skully's tail-tip and ear insides turn jet-black, and his eyes begin to glow white, losing their pupils.

Skully is silent, speaking to no one. He gets easily frustrated because of this, and as such, carries around a notepad and pencil. If he were to lose these, many of his emotions would become bottled up inside him, making him more prone to violence. Skully also can be very pessimistic, and dislikes being around others unless he has to be. When in combat, Skully becomes deadly, cold, and calculating, attacking his enemies with blades of darkness or blasts of dark energy.

Skully was born in the desert region of Sandsea.  As a child, he was often shunned for his silence and umbrakineisis, leading him to dislike other people. His parents would regularly beat him,  often taunting him and daring him to fight back as they did so. Then, one day, when Skully was ten, he did fight back.  He snapped, turning into Cursed Skully, and killing his parents.  Skully later wrote/ said "I don't regret it." to Chaos. At the age of twelve, he met Chaos Shuriken, and one year later, was part of the team that Chaos called together to combat Tatsurin the Unbound.  After a few more times of being called to help, Skully suggested that the group become an official team.

Skully is clairvoyant, meaning that he can see into the future.  His visions of the future normally come at extremely random times, and are usually quite vague. After seeing one of these visions, Skully will normally go off by himself for an hour or two to contemplate the meaning of the vision, only coming back when he has figured out a basic understanding of the vision.

Skully possesses umbrakineisis, or the power to manipulate darkness. This is his main offensive skill in combat, and has become his main method of fighting. His most common use for this power is to create blades of darkness to send at his enemies.

Skully is expericenced at fighting with a knife, able to stab you in the back before you have time to turn around and shoot him.  His most used style of knife-fighting is with a kinfe in each hand against multiple foes. However, he has admitted that a knife is the only bladed weapon he knows how to use.

Skully can use nunchaku with varying degrees of success, although he's normally very accurate in his hits.  Although, he just as usually ends up hitting himself in the face at the same time. Skully tends to use nunchaku made of iron instead of wood.

Skully is mute, meaning that he cannot speak. This means that if he were to lose his notepad and pencil, he would lose all ability to communicate. Also, whenever Skully touches a Chaos Emerald, he runs the risk of turning into Cursed Skully. If he is holding two Chaos Emeralds at the same time, Cursed Skully is almost assured. Another notable weakness is that his visions can be so frightening that they can paralyze him with fear. As his visions normally do not happen when he is in combat, however, the danger level of this is arguable. His most obvious weakness however, is the fact that his umbrakineisis becomes semi-useless in abnormally strong light.

Retrieved from "https://sonicfanon.fandom.com/wiki/Skully_the_Fox?oldid=1800075"
Community content is available under CC-BY-SA unless otherwise noted.