Start a Wiki
This is an article about Silvia the Hedgehog, a character created by Spyken (Emidikun on DeviantArt) on August 5, 2012. 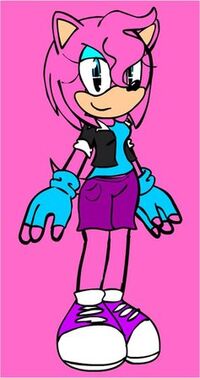 Silvia is a hedgehog from the future. She is Spikes' the Hedgehog little sister and one of his major motivations for his heroism.

Silvia is a pink hedgehog with blue eyes and two front quills. She bears a striking resemblance to Amy Rose.

After needing an urgent tranfusion from her brother (who was still in Atomic form), she permanently gained a lighter form of his fur along with gray eyes. She hides this with a wrist device.

After being rescued by her brother, she started wearing a cyan top covered with a short black jacket with rolled up sleeves, a purple short, purple/white shoes and cyan fingerless gloves.

At the time of her kidnapping, she wore a short purple dress along with white shorts and cyan sandals. She also used to wear a dark blue bandana on her head (which Spikes now wears around his neck).

Silvia is a very caring individual, not hesitating to stand up for those in need and especially the people she loves. She enjoys life and what is has in store for her everyday, living with the saying that you can make everyday great by yourself. While she is very nice, she is not above scolding people who she feels deserve it, like her father and older brother.

After being saved from imprisonment, she somewhat retained this personality, but while still adventurous, also gained a strong longing for a quiet, normal life, preferring not to be directly involved with her brother's adventures.

Silvia was the second child born of her two parents. She had a very nice childhood growing up with her family and they were very close. While she was not one of the most popular girls at her school, she didn't mind a bit and still got people gravitating towards her due to her warm personality. Her family regularly went to visit the Rose family, her aunt being the wife of the head of that family, and while there she spent days playing with Spikes and their cousin Carson.

She and her family were suddenly kidnapped one day, because a rogue organisation wanted to experiment on her older brother for their Project Sonic Reborn. She and her parents were at first held together in a cell, but were still treated rather nicely, until a certain discovery caused them to be transferred to a labor camp. At the camp, Silvia and her parents were separated from eachother. While her parents were sent to the deepest levels of the site, she remained on the first . When she asked for her parents' whereabouts or why they were even separated in the first place, she was always met with silence. Not being able to deal with the situation, she nearly shut down entirely, until she remembered her brother's last words towards her; to not worry because they would be reunited no matter what happened. This is what kept her motivated for five years.

After five years, she started to hear some rumors from the guards about a silver hedgehog who was ransacking every of their bases. Based on the on the description that she had heard, she directly assumed it was her big brother whom they were talking about. She was overjoyed at the prospect of meeting him again, but her captor, Eggman Nega had other plans. Having deduced that Spikes was raiding his bases in search for his family, Nega planned to place a trap for the hedgehog.

When Spikes arrived at the base, he was surprised to find it seemingly empty. When advancing further in it however, he started to be confronted by more and more enemies and obstacles, draining him more and more along the way. When he arrived in a large room he saw that he had finally reached his sister. Silvia cried tears of joy seeing her big brother, saying she knew he would come for her.

Their reunion was short however, as not long thereafter the room was flooded with robots. While their power was not too big, their seemingly infinite numbers along with the fact that he was almost at his limit, caused Spikes to be overwhelmed by them. At that moment Nega revealed himself and gloated about the situation the hedgehog was in. Proudly claiming to have beaten his whole family, the scientist made his base to selfdestruct and retreated with Silvia in tow, leaving Spikes in the crumbling building.

While the scientist gloated over his victory, Silvia kept believing her brother would come find and save her and her parents. Nega scoffed at this, wondering how even if Spikes had survived, how he would find them in space. This statement kinda shocked her and seeing this, Nega jokingly said he got a little help from her father in building it. He also stated that the only reason she was still unharmed was to keep him working. Meanwhile, Spikes had managed to escape and swore to get stronger and save his family while putting on his sister's bandana that lied on the floor.

1 of 2
Add photo
Retrieved from "https://sonicfanon.fandom.com/wiki/Silvia_the_Hedgehog?oldid=1851043"
Community content is available under CC-BY-SA unless otherwise noted.