Normal: Silver is a Lucario. He has mostly blue fur with a stripe of black fur on his face-over his eyes and nose-and between his ears, stretching from the front of his face to the back of his head. His hands, feet, shoulders, aura sensors, and a stripe of fur around the bottom of his midsection are also black. Silver has yellowish-cream fur on his torso with a spike on his chest and one on the back of each hand. He also wears a black wrist-com on his right wrist and a Lucarionite on his left, both behind the spikes on his hands. An interesting feature Silver has is that a large patch of fur on his nose is white-which is how he got his name. He also has a long scar on the inside of his right forearm, but it is unknown how he got this, and has never been mentioned in-story.

Mega Evolved: When Silver Mega Evolves, his aura sensors become longer-with the outer two being longer than the inner two and gaining red tips-his hands and feet are now red-with two spikes on each hand and each foot. The front spike on each hand is longer and points outward(making his punches more dangerous), while the front spike on each foot is longer than the one in back. His tail becomes a cape of fur matching the fur on his torso-which also stretches farther up at his shoulders. There is also a spike on the front side of his shoulder, and ragged black lines stretch down his arms, legs, and across his face. When he Mega Evolves, he retains his white nose and the scar on his arm, yet his wrist-com disappears.

Possibly owing to his Ability, Inner Focus, Silver is a calm and collected person, able to keep his cool even in the most stressful of situations. Silver is strong-willed, protective, and a loyal and fierce leader. Unflinching in leadership, Silver is wise and fair, though he does not tolerate trouble. Even in the heat of battle, Silver is level-headed and calm

Post-overhaul, Silver's past is unknown. At some point in The Legend Begins, Fox spoke to Silver, and the Lucario joined his team with Fox's and Tai's to form the Storming Alliance. 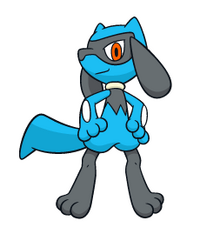 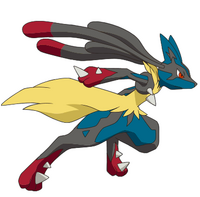 Retrieved from "https://sonicfanon.fandom.com/wiki/Silver_the_Lucario?oldid=1862187"
Community content is available under CC-BY-SA unless otherwise noted.