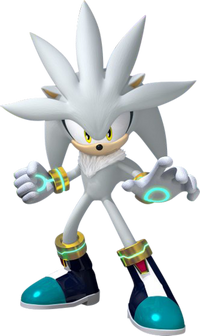 using his powers for good,

helping people to stand up for themselves,

self-encouragement, history
Dislikes
Being interrupted during a mission,

seeing people get picked on, being made to feel worthless
Friends
Sonic the Hedgehog, Miles "Tails" Prower,

Cream the Rabbit, Espio the Chameleon,

Levitation
Weaponry
Whatever he can pick up
Other Info
Birthday
November 14, 2XX6 (in the future)
Favorite Food
Bananas & pizza
Favorite Drink
Starbucks coffee

Is that the thanks I get for my assistance? How rude!

Silver the Hedgehog is a hedgehog who lives 200 years in the future. Like a number of characters, he's not part of the Knothole Freedom Fighters, but has helped them out before. He has only made rare appearances in BearfootTruck's stories so far. Mainly, this is because he doesn't travel back to the past unless his time period is in danger or he's really lonely. Mostly, Silver is just like his canon counterpart. For other possible futures, take THIS!!!

Born to unknown parents, Silver lived a somewhat normal childhood until it was discovered that he had "the gift". Thus, he was sent to a special school. Although he didn't make many friends, he learned to control his psychic powers and seemed to be headed for a good future. However, with the release of Iblis, his future was horribly disrupted. Forced to fight on his own, Silver underwent another change in personality as he dedicated his life to helping out those in need, whatever the cost. When Blaze ended up getting transported to his future, the two embarked on an adventure that transcended generations…

Silver's personality is unchanged from his canon counterpart. However, he has a habit of saying "It's no use!" at least once during every story he appears in.

Again, his appearance is exactly the same as normal, although in certain stories, he wears a cybernetic outfit based on his "Race" outfit from Sonic Rivals 2, which consists of a black bodysuit with black gloves and boots, which has cyan bands and gray trim.

Thus far, Silver hasn't been shown to have any new abilities besides the ones that he's been given in the games, barring Hedgehog Sense.

With his psychokinetic powers, he doesn't really need weapons. Besides, anything that he can pick up using his powers can potentially become a weapon of his.

When Sonic is teleported back in time, Silver goes to Knothole and brings the other Freedom Fighters to the future. They end up in Eggopolis, now a bright, clean, thriving city. However, the reality is that most of the world has fallen into a state of bedlam, with high crime, extreme amounts of pollution and global warfare, among other problems. Heading back to the present, Silver joins Knuckles in the search for Sonic. Even though Sally and Bunnie have found Sonic (which they didn't; they found an impostor), Silver insists on heading to Robotnik's lair in order to help Blaze. Knuckles disagrees with him, but Silver uses his telekinetic powers to change Knuckles' mind.

Inside Robotnik's HQ, Silver manages to free Blaze and defeat a bunch of Robotnik's badniks. With that taken care of, Knuckles decides to head back home. Silver insists that they continue to help Blaze, but she and Knuckles convince Silver to get out of there. With the mission complete, Silver heads back to the future. Later on, though, he heads back to the Great Forest when the future starts acting weirdly. Here, he helps Shadow fight one of the impostor Sonics despite Shadow's insistence that he can win by himself. After the battle, when Cream thinks that the real Sonic is dead, Silver convinces her otherwise. With the impostor taken care of, Shadow tells Silver to go away, which he does.

Silver comes back from the future to give Sonic a birthday present: A copy of Flames of Disaster: The Definitive Guide to Coping With and Overcoming Symptoms of Being the Iblis Trigger, by Peter Q. Silverman, Ph.D. The Blue Blur thinks it’s just a stupid joke, but Silver is being entirely serious about it. He even warns Sonic that denial will make his alleged symptoms worse. After Sonic reluctantly accepts his gift, Silver returns to the future.

In the epilogue, Silver is passing through Knothole Town when he sees the statue of Sonic and Tails. He stops walking and puts his hand over his heart, reflecting on everything that the two of them have done for him. Then, he is briefly interrupted when Alura the Cat asks him how he’s doing. Silver says he’s fine, but deep down inside, he feels very lonely because most – if not all – of his friends are living 200 years in the past.

Silver comes from the future to celebrate Shadow and Rouge's birthday, taking a brief break to enjoy what the past has to offer. His gift is two opening day passes for the Glitter Palace discotheque in Emerald City. Later in the story, he films the motocross race between Sonic, Tails, Shadow and Rouge.

Like much of the Sonic cast, Silver is attending James F. Charleston High School in San Santos. Like his fellow History students, he too is confused as to how the Tedescan Civil War could have happened. After he goes through Mr. Obotir's "Strength Through Discipline" training, he is reminded of how he had to go through a lot of special training after he discovered his PK powers. He is suspicious of it at first, but is willing to go along with it as long as nobody gets hurt. Even when Mr. Obotir comes up with "Strength Through Community" and gives the movement the name "The Wave", he doesn't lift a finger.

However, when Blaze ends up spending less time with Silver and more time with other members of The Wave, he ends up feeling depressed. When Sonic, Tails and Rouge discover him curled up by a tree, he refuses to have anything to do with them until Sonic and Rouge convince him to take their side against The Wave. After spreading a bunch of flyers that Tails made around the school, he ends up feeling better.

After Shadow and Knuckles drag Sonic off to one of the school bathrooms to torture him, Silver follows them and manages to save Sonic before he suffers any critical damage. After a brief chase that ends with the two protagonists hiding in a shop classroom to evade their pursuers, Silver fixes Sonic's broken nose and confesses that he never hated the Blue Blur. Then, they spend the rest of History class studying in the school library. At lunch, Silver berates Blaze for being more interested in The Wave than him and questions whether she even knows what she's getting into. Later, he heads to Mr. Obotir’s house with Sonic, Tails and Rouge in an attempt to convince him to stop The Wave. Though they are unsuccessful, Silver joins them later at Sonic and Tails' house for pizza and ends up saving his friends when a group of gang members attempt a drive-by shooting on them using his PK powers. As a result of the shooting, Silver doesn't feel comfortable going back to his house, fearing that somebody might find out that he survived the shooting. However, he has trouble falling to sleep that night because Sonic and Tails' bed won't fit all three of them.

For the first half of the next day, Silver plays hooky from school along with Sonic, Tails and Rouge before donning a Wave uniform and infiltrating the rally in the school gym. It is his shock at Mr. Obotir announcing his nomiation for President that gets the four resistance members captured. Silver – along with his other three companions – learns who Mr. Obotir really is: Dr. Robotnik, who used The Wave as his latest excuse for world domination. Silver is unsuccessful in using his PK powers to help him and his friends escape due to a PK limiter that he’s hooked up to. After he's freed, he follows Sonic, Tails and Rouge back to Sonic and Tails' house to retrieve Miles Electric. While searching the hallways for Robotnik, he gets frustrated when they are unable to find him even after an extensive search. Nevertheless, he calms down when Espio tells them Robotnik’s location and covers Tails while he attempts to break the code to the secret door. When the police APC gets blown up, Silver rushes outside with his friends and not only uses his PK powers to block a Panzerschreck rocket from Shadow, but also to pry the launcher from him. A little later, he uses his PK powers to lift up a S.W.A.T. van to conceal the S.W.A.T. team’s re-entry into the school and to stop the EggRobos that are guarding Robotnik. When the mess is over, he expresses his gratefulness that Blaze is OK.

Silver also appears in the "Sonic Says" segment, about to use an Internet source for a term paper when Sonic cautions him and the reader about false information.

Silver heads back in time to attend the International Festival of Community with Blaze. He is not only happy to meet Hope, but also puzzled when Sonic reveals that she's Shadow's girlfriend. He wows her by telling her about his ability to time travel. After the bomb goes off, he is concerned by the rumbling throughout the Emerald City Palladium, but nevertheless happy when he sees Sonic and Shadow hug. Later in the story, Silver confronts Shadow outside of Brookwood Behavioral Health about his vigilante campaign and the consequences it had: a deadly race war that led to the extinction of all humans in the Kingdom of Mobius, plus an invasion by the Roseinian Empire that led to a nuclear war. Even so, he allows Shadow to make things right on his terms. Silver cries when Shadow offers himself as a person to lean on, and they hug, unaware that Detective Sergeant Jim Stauerbach and Detective Hank Moroder of the ECPD are watching them. However, because neither detective recognizes Silver, he is free to go back to his own time.

Silver also appears in the "Sonic Says" segment, coming from the future in the DeLorean time machine and telling Sonic that he's got to come back with her to the future.

Retrieved from "https://sonicfanon.fandom.com/wiki/Silver_the_Hedgehog_(BearfootTruck%27s_Universe)?oldid=1883990"
Community content is available under CC-BY-SA unless otherwise noted.