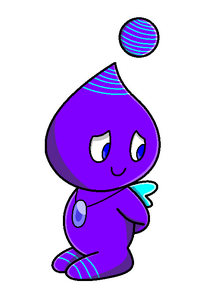 — Shyly when he was being called cute or adorable

Shyly was similar to all kinds of Chao. But as an Espri, his skin was Violet and has Cyan highlights that have stripes on his arms, feet, head, and dot that shows the marks of Lura. He also wears a seedrian gem necklace.

When he was in elemental form, he looks like a phoenix who was god-like that was made of light.

Shyly was a Kind, Caring, Gentle and a Friendly Chao who likes to help his friends out and also likes peace and tranquility. He's also a lovable Chao who like being called cute and hugs. And because he can talk, he also speaks courteously in a quiet voice.

He's smart and resourceful too, But he was shy and nervous, and he was also feeling guilty and blamed himself for failure or mistakes. He was a bit of a coward at first like when he saw Fate the Predator coming to get him, but he gained a bit of courage and all the confidence to defeat her. He was also protective when Cosmo was in trouble or was nearly killed.

He was also a bit girly since he didn't mind being allowed to come to any girls' slumber party due to his toddler-age because of his adorable look. He can also be playful too, especially when he snuggles with any girls' feet like a kitten. Some girls think he's kinda cute, Especially for his adoptive aunt: Galaxina.

Shyly was the opposite of jealousy too, especially when any Chao, even Cheese wants to hug Cosmo.

Shyly was born at the Lura Kingdom in Blaze's world as a baby Chao named: Anakin, who lived with his royal parents. He also has two bodyguards: his kind and cheerful older sister: Katherine and his Pyrokinesis teacher who was also the guardian of the Sol Emeralds: Blaze. When he was two years old, a lava-like mobian demon named: Fate the Predator, was sent by the monster: Ifrit to invade the Lura Kingdom by hunting the Chao especially Anakin. So he was forced to escape with his sister into the portal, only to get separated due to a two-way wormhole and Anakin ends up in Sonic's World.

Now Shyly has to start his journey to find a new home. First, he was called Shyly by people who think he's nervous and decides to adopt that name. Then, he saw a ship. He decides to climb on without them noticing. Though he was found and caught by Cosmo, she decides to adopt him. Now he will have many adventures with Cosmo and her friends.

He has the ability to show his memories by touching his dot, causes it to increase then glows while the highlights swirled around like a Crystal ball. Then, memories appeared in this dot that shows what he recorded from his vision. He also has the ability to share anyone else's memories by letting them touch his head when they have proof while he touches his dot to show visions of memories they recorded.

Shyly has a fear of anything that scares him the most, especially Demons like Fate the Predator and monsters that inflates like a balloon with creepy eyes. Shyly was also afraid of losing families like his own and Cosmo which leads him to despair.

The worst part that upsets him is being tortured, punished and abused that causes him to cry with fear and guilt.

Retrieved from "https://sonicfanon.fandom.com/wiki/Shyly_the_Lura_Chao?oldid=1860206"
Community content is available under CC-BY-SA unless otherwise noted.