Shine the Bat is the firstborn child of the late Herman and Esmeralda Melter, and the older brother of Rouge the Bat. He is also the nephew of Holly and James Carver, and the older cousin of Angel the Bat 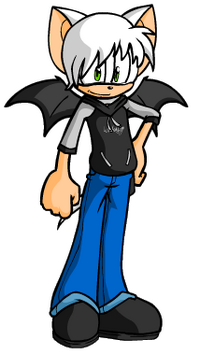 Shine Melter was the firstborn child of Herman and Esmeralda Melter. Six years later, his younger sister Ruby was born. When his parents weren't treasure hunting, his younger cousin, Angel, was often dropped off at his parents' house, often because his uncle and aunt were too busy with work most of the time. Because of this, the two of them developed a close relationship with her.

When Shine was eighteen, a young cat named Zona, who also happened to be one of his parents' rivals, captured him, along with his sister, Ruby, and held them hostage in a large tomb where her parents had planned to steal a valuable treasure. Zona had told them if they wanted their children back, not only would they give her the treasure, but to give her any remaining treasure they currently had. Herman and Esmeralda agreed to give her the treasures, since their children were more important to them.

Once they arrived at the shrine, Zona would agree to free them, but only if they brought the treasure to her. They did, and once Zona cut the ropes she used to tie them with, one of them accidently hit a tile that set off a trap, setting the tomb on fire. Shine and Ruby escaped, but Herman, Esmeralda, and died injuries caused by fire, due to being unable to escape, while Zona was encased in melted treasure and turned intoa statue.

Shine was able to get to a nearby hospital, but lost his arm to the fire

When Shine lost his arm, he resided in the Scrap Brain Zone, and somehow, rose in the ranks to become a Robot Warrior, someone who made sure that no robot would her. It seems he is high in the ranks, as he is often with Martha the Crocodile when they are on missions.

Shine makes his debut in Sonic Fanfiction, as the son of Herman and Esmeralda Melter, and the older brother of the missing Ruby Melter.

Since Shine has made no formal appearances in IncaIceBunny's Fanfictions yet, it is difficult to determine his personality as of this moment.

Shine is a white bat with black bat wings, white hair, light skin, and green eyes. He is 113 cm. (Roughly 3'8"), and his weight is unknown. Being a Light Zone Angel, it can be assumed his black bat wings were replaced with white feathery ones.

In his attire before his death, he wore a black hoodie with gray sleeves, blue jeans, and black shoes.

Having lived in the Supernatural World for quite some time, he seems to have a vast amount of knowledge about it.

When in the Living World, Shine can disguise himself as a mortal being.

More skills and abilities have yet to be demonstrated.