I may be the embodiment of darkness and serve under my father's rule... but I will still protect my family and friends if need be!

Shima the Hedgehog is a shadowy, shapeshifting figure created by her father, Xilax. She assumes her appearance as a Mobian hedgehog as her primary form. She is also the older sister of Hali the Hedgehog.

"Born" in Space Colony ARK by Xilax, Shima was born as an embodiment of pure, shadowy darkness. Initially born genderless, Xilax had decided to treat her as his eldest daughter and even helped assume her form as a Mobian hedgehog. Taken under her father's wing, she was received rigorous, brutal training and, despite her father's obvious villainy, he still genuinely cared for her.

Several years later, Shima became the older sister of Hali, though it came with a price; their mother had died from complications and despite Xilax's efforts, He fell into serious disdain. Even so, she assured him that she and her father will help raise his younger daughter... though due to Xilax's volatile emotions, all Shima had to do was raise her younger sister and even help her throughout. Hali was spooked at first, but over time, she's gotten to truly consider Shima as her older sister.

Shima, in her Mobian form, is a red and black furred hedgehog with red eyes. Her hair is short and curled, and she has a tuft of black hair on her forehead. Her eyes are slanted like Shadow's and they have black tips on the end. Of course, some of her parts are concealed in pure darkness, which shows her true form; a living shadow. While her Mobian appearance is similar to Shadow the Hedgehog, they are in no way biologically related nor do they share any bloodlines between the two. And in her shadow form, she always stays close to Hali's shadow as to fully conceal herself.

Her outfit is also shown from the gallery (albeit outdated) sans earring.

Shima is quite reserved and reclusive around new people except her own sister, and doesn't normally speak unless told otherwise. She depends on Hali on interacting with new people and monitors closely by determining on whether or not they are friendly or hostile.

In contast to Hali's personality, who is sweet and caring albeit shy at first glance, Shima's personality is an on/off switch in itself, though closely monitored by her sister. If intentionally provoked, she doesn't hesitate to attack and engulf those around except her sister, and fly into a blind rage until she is calmed down. However, she will refuse to attack children, including her own father and sister. On the other hand, she is quite demure around others, though with proper development, she is quite protective and caring to those who befriended her.

Despite her looks, she's not exactly romantically interested in others, though doesn't mind compliments or two. Just so long it doesn't go overboard, that is.

Being an embodiment of darkness, she possesses excellent abilities in manipulating darkness around her and even temporarily blind her opponents partially or fully, and in her Mobian form, she's exceptionally fast before anyone can blink. In addition, she can manifest her limbs into bladed weapons from shrouded darkness. And if battling in pitch-black darkness, especially at nighttime, this can give her serious advantage to this, assuming that there's little to no light source.

Additionally, she can also take control of the shadow from her opponent and take control of them for a limited time. This comes in handy if, when situations become dire, there are greater number of opponents she is facing and can use one of their own as a shield.

Despite her excellence in her prowess, she's not without weaknesses. Bright lights can seriously give her away and drain her powers at the same time (though this only applies to Solarkinesis, not from natural sunlight), rendering her vulnerable to attacks. And despite her true form, she has limits on what objects she can phase through, as she can only phase through them at a limited range or risk getting herself stuck.

Her body, even in her true form, is still relatively solid and can still be attacked so she isn't relatively invincible. 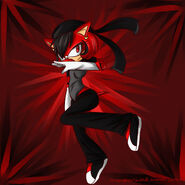 Add a photo to this gallery
Retrieved from "https://sonicfanon.fandom.com/wiki/Shima_the_Hedgehog?oldid=1860857"
Community content is available under CC-BY-SA unless otherwise noted.