"No Wilson! We can move somewhere safer! The warriors protect Lamarkie Village, we can move there!"
—Shelly begging Wilson not to give up on them, A Dark Secret

Shelly the Wolf is a female Wolf who makes a minor appearance in the Prologue of A Dark Secret(the prequel focusing on her husband Wilson the Wolf). She is Wilson the Wolf's wife and the mother of both Rex Storm and Stan the Wolf. 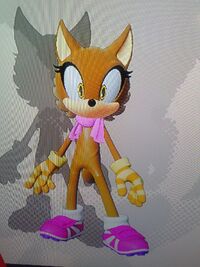 Shelly is a devoted mother and wife. She deeply cares for her husband and sons. When Wilson gives in to Eggman's demands, Shelly desperately begs him not to, showing her devotion to him. After she passes, and meets her husband again as a Spirit, she is overjoyed to see him again.

Before the Series: Shelly's past is unknown. At an unknown point in time, she fell in love with and married Wilson, having two sons with him.

A Dark Secret: In the Prologue, Shelly and her sons are being threatened by Eggman and a group of mercenaries(referred to as rogues in-story) known as the Jackal Squad. Shelly is visibly frightened, with a terrified Rex clinging to her and Stan hiding behind her. When Rex is yanked away by the Squad's leader to use as leverage against Wilson, Rex cries out for his mother. Later,  when Wilson gives into Eggman's demands, Shelly begs him not to, saying they could move somewhere safer, or even move to Lamarkie Village to be protected by the warriors. Eggman laughs and tells her that no matter where they moved, he would always find them. Shelly is frightened by this, and says nothing more as Wilson packs his things and leaves. She is later indirectly mentioned by Wilson,as he says with his dying breath, "Leave my family alone." In the Epilogue, Shelly passes away with Stan and Rex witnessing, and as her Spirit rises, she notices Wilson and is overjoyed to see him again.

The Rising Darkness: Shelly does not formally appear, but is mentioned in the Prologue when it is said that after their mother passed away, Stan became Rex's legal guardian.

The Storm of Evil: Shelly appears after the battle with Infinite as a Spirit alongside her husband. She expresses great pride in her sons, and later returns to the Stars with Wilson.

Like Wilson, Shelly is devoted to her family, and Eggman used this against her, knowing she wouldn't resist if her son was in danger.

Wilson is Shelly's husband, and they care very deeply for each other. Wilson was willing to give up his own freedom to save her and their sons.

Stan the Wolf and Rex Storm

Stan and Rex are Shelly's sons. She passed away before the Great Rebellion, leaving Rex in his older brother's care.

Shelly never liked Eggman to begin with, but was terrified when he used the Jackal Squad to threaten her and her sons to get her husband to comply.

Shelly is not familiar with Infinite in any way, only meeting him in person when he led the Jackal Squad to threaten her family.

Shelly passed away of natural causes while Wilson was murdered by Infinite.

Retrieved from "https://sonicfanon.fandom.com/wiki/Shelly_the_Wolf?oldid=1790666"
Community content is available under CC-BY-SA unless otherwise noted.