Sheila the Puppy is a 8 yr old golden retriever/lab puppy who is a hydrokinetic, which means she can control water.

Tornado the Cat and Abyss

Crystal The Raccoon(rival in terms of team leader, nonetheless, they are good friends)

﻿She can control water, which is an unusual ability for a dog to have. However, she was influenced by the Chaos Emeralds when she was younger, and has since then gained the ability to use water to her advantage. She was very hesitant at first, but when Crystal begged her it was her only hope, she gained her Super form, Super Sheila, by using the Emeralds' power, and much like Crystal, her water powers are increased and she can fly, however, she lost this form later. She can also ride her hoverboard: the "Water Wave"

Super Sheila is the Super Form of Sheila. In this form, her water powers are increased and she can fly. She was shy to enter it at first, but Crystal cheered her on, and they both beat Eggman, together. She can also give her friends shields like in Sonic Heroes. However, she lost this form later because she lost the energy she had to turn into it.

﻿She is very shy, but is a very good friend whenever need be. She is of the Speed formation, which means she is very fast, but can act like a Power-type as well. She is best friends towards Crystal, who, like her, found her friends in another dimension. She is part of Team Physics, a team with which her shyness completely disappears.

Attack: Much like Crystals attack, only with her water powers and she uses a wave to push her along.

Attire: Her boots change to a more sneakery look, and she has the sunglasses like Knuckles does, only they aren't as big.

Description: This board is very squishy, which helps Sheila alot in races!

﻿I don't know about this...-her main quote, and before a race starts

That's right on!-when she passes someone in a race

Yeah! Orright!-when she bounces off something in Gravity Dive

Oh dear, guess i'm not as powerful as I thought-when losing a race

Her old design
Add a photo to this gallery

Note: Her Riders outfit does not change. It still remains the same. 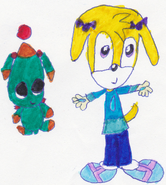 Add a photo to this gallery
Retrieved from "https://sonicfanon.fandom.com/wiki/Sheila_the_Puppy?oldid=1819413"
Community content is available under CC-BY-SA unless otherwise noted.