Stop being such a complete moron! The fact is, you're on the wrong side here! 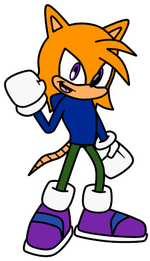 Shawn the Bandicoot is an original Sonic fan character created by pumpituppartyzone/Ike. He is an Amber anthropomorphic bandicoot. His main appearances are in the Youtube show called Total Sonic Island. His best friend is Rory the Pika, and he is the power formation of Team Bandicoot. Twila Mouse is the speed, and Dana the Panda, who he may share a love interest with, is the fly formation. He is the owner of Shawn's Junkyard.

Shawn entered the show in the second episode as one of the antagonists. He has a very annoying, obsessive attraction to Maxie Flippercorn, which drives her to the point of screaming and beating people up when they bring it up. Maxie absolutely loathes Shawn, but he doesn't seem to mind. In episode 4, he threatened Sadie when she partnered up with Maxie in the challenge, which started a conflict. He teamed up with Kou the Hedgehog in the challenge, but most likely by default. Kou probably doesn't like Shawn, due to the fact that they are called the "Shawn Haters".

Shawn was in the show from the beginning and was assigned to Rouge's team. Immediatley, people (fans and contestants) disliked him because of how perverted he was, but didn't vote him off immediatley. For an unknown reason, he voted Vector off in the first episode. The episode afterward, almost everybody on the team voted him off, even though he almost won the challenge. He was then 2nd character to be eliminated.

In the episode "Hide and Don't Speak," he, Izzy, and Rouge returned to the island to help with the Hide and Seek challenge. They were used as the people who were "it," and found every person's hiding spot except for Sharky's. This is the only episode in the show so far (because it was the only one possible) that Shawn was shown to care for Maxie, as he found her hiding spot but let her find another. After she leaves, he tells her to call him, but remembers that she does not have his phone number.

Shawn is very persistent, and does not stop doing something until he gets what he wants. With his persistantness, he seems to try the same thing over and over again, assuming that he will get a different result. Though this usually does not work in his favor, he always tries anyway.

He enjoys playing pranks on people, and he hates crying, unless it is because of a prank he pulled. Shawn tends to pull pranks on people at very inappropriate times, which he just finds even more funny. He likes to annoy people, and has always loved to play with guns, whether it is a water gun, paintball gun, or a shotgun.

Another odd thing about Shawn is his obsession with fire. This also seems to be one of his weaknesses, as he can sit down and watch a fire burn for a very long time, and it can pull him away from almost anything. He also enjoys lighting objects on fire, even when it causes him pain. He appears to be put in a trance whenever he sees something burning.

Shawn has many abilities that are similar to Crash Bandicoot's. When he spins around in a spiral movement quickly enough, he starts to apparently for a tornado, which he can launch in any direction. He calls this the Bandicoot Twist, which is an ideally powerful skill.

Shawn also has many of the common abilities, such as the Spin Dash and Spin Jump. He can also do the Bandicoot Bounce, which is the Spin Jump, but if you bounce off the floor, you go higher than usual.

Shawn is a black belt at kung-fu, something that he likes to brag about to people. He claims that martial arts skills run in his family, even though neither Crush nor Desiree (his brother and sister) have these skills. Shawn has advanced upper body strength, most likely due to his kung-fu skills, which helps him as power formation on his team. He also has Super Speed, though he is about the speed of Knuckles the Echidna.

Shawn is one of the team captains in this game. His team name is the "Bandit Coots", his special throw is the "Anvil Ball", and his special swing is the "Combustion Swing". His default stadium is "Boom Boom Boulevard", and his team consists of himself, Dana, Twila, Skipper, Missy, Zamboni, Battery, Batterina, and Keygen.

In this game, Shawn is a NPC. He is the owner of Shawn's Junkyard, and gives out Power Rings.

Shawn appears as a playable character in this game, partners with Razz, investigating the missing chao.

Kou the Hedgehog (to an extent)

Maxie Flippercorn (to an extent) 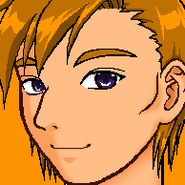 Shawn in anime. Made at http://foxrichards.deviant

Shawn and Dana with their extreme gear (bases used) 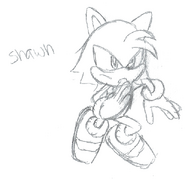 A sketch of Shawn in Sonic Rivals 2 style

Shawn in Maxie Rivals
Add a photo to this gallery

"Sweet! We got it." - When Team Blast is achieved

"Wow. You're going through with it. Too bad you're gonna brutally lose." - Before Race/Battle 1

"Let's get this show on the road." - Before Race/Battle 2

"Before, I was taking pity on you. Now, it's serious." - Before Race/Battle 3

"Time to teach you a lesson." - Before Race/Battle 4

"Just what I expected." - After Winning Race/Battle 1

"That was just too easy." - After Winning Race/Battle 2

"Wow. I can't believe I really lost." After Losing Race/Battle 1

Retrieved from "https://sonicfanon.fandom.com/wiki/Shawn_the_Bandicoot?oldid=1521186"
Community content is available under CC-BY-SA unless otherwise noted.