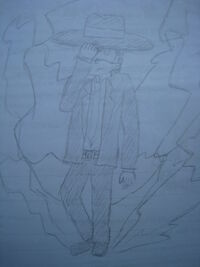 Sharps the Hitman is a wolf who is dead accurate at firearms and a proffesional (and illegal) hitman.

(Sharps the Hitman is a character created by User:TuveTommy.)

Sharps wears a black suit jacket with a notched lapel and white shirt underneath, with black trousers and a silver belt. He also wears a pair of polished black shoes and grey socks. On his head he wears a black fedora with a white band (he seems to like wearing black).

His hair is silvery-white with a light-blueish hue. It covers his head (well yeah, just what hair does) and partly the back of his head. His hair is considered long for average hairstyles.

Sharps is cold and doesn't care much about anyone or anything. He isn't the talktive type of person and can be irritated if other people lock him in a lengthy conversation. There isn't a lot of things he likes and cares about. He can also be quite short-tempered, impatient and easily irritated. But he is usually cool, calm and collected, even if the situation is rough.

Because of his job, he has to kill people regularly. But he would refuse to kill people without a reason. After all, he hates being called a "cold killer" and would sometimes be merciful (at least sometimes).

He hates his father for some reason he isn't willing to reveal. But he still wears his rings and keeps his gun.

Sharps wasn't like this when he was born. During his childhood, he was a happy, polite, innocent kid living with both his parents in a humble village. He was happy and didn't even think about that one day disaster would strike, changing his life forever.

War broke out as invaders were determined to conquer the country. The government immediately started to call for men to fight in the front lines. Unfortunately, Sharps' father was called up too. Now Sharps was left only with his mother.

The enemies started to push further into the country. The village, being very near the borders, quickly became the frontline battlefield. The villagers didn't have time to evacuate as the enemies came to enjoy: a brutal massacre.

It was a scene greatly unapproved for young Sharps as he saw houses looted, set on fire, or blew up. Screams filled the air and cries of satisfaction left the mouths of the enemies. Then came hope.

The frontline soldiers have arrived and started to battle the invaders as Sharps cowered inside his untouched home. After the battle, the survivors were taken to a refuge.

Bad news came swiftly. The government said they weren't sending more reinforcements to this village and told the soldiers and the remaining villagers to fend for themselves. Even children needed to arm themselves. Everyone was miffed at the government's outragous command. But enemies were definitely going to come back again. Everyone was forced to fight. Sharps' mother wasn't in the shape of fighting, due to shock, so it was up to little Sharps to defend his home. By using weapons from fallen enemies and soldiers, Sharps tried his best to protect his mother and his home.

The first night proved to be the worst. Sharps was too scared to even do anything while enemy soldiers broke in, regardless of the barricades set on the door. They killed Sharps' mother and very nearly killed him too if it wasn't for a unknown soldier to the rescue. The soldier took the enemies out single-handedly and led young Sharps out of his house, for it wasn't safe anymore.

Sharps spent some time grieving over his mother's death. Soon, Sharps started to get used to the merciless battlefield, as he armed himself with weapons from the fallen soldier of both sides. He started to shrug of his childhood innocence and happiness, and becoming cold and emotionless. He started to become what he is.

The only happiness left during war was his only and true friend, the unknown soldier who saved his life. The soldier took pity on young Sharps and felt like training him and taking care of him. It was the soldier that taught Sharps how to handle guns and shoot them accurately.

His most noticable skill is to be very, very accurate at aiming. By using a good weapon (his revolver), he can hit anything, even when it moving or if he himself is moving. During combat, he would always aim for weaker spots (or just start blasting at their heads). He rarely misses and would curse himself for doing so. Despite his aim, he still chooses to use a sniper rifle at long ranges (and looonnnnngg ranges).

He also has the ability to reload and switch weapons rapidly. Another thing, Sharps can pull out his revolver really fast. Even if he has a sword pressed on his neck or a gun trained at his head, Sharps will always whip out his gun and take a shot before the opponent has a chance to react (so don't try to duel with him). He later reveals that he learnt all these skills during wartime.

To add more lethal power to his guns, he can focus and charge his shots to do more damage. His weapons would slightly glow with orange or red. The longer he charges, the stronger the shot gets. He uses this to do armour piercing or inflict more damage (and heck more pain).

Sharps specializes in ranged weapons, so when it comes to close combat, he is greatly weakened. He would often try to back away when enemies are closing in, in order to give himself more space. His combat skills are enough to take out weak minions but aren't really a match to tough fighters.

When he is charging his attacks he needs time to focus in order to do large damage. His charge can be easily disrupted if other people keep on attacking him, causing him to focus on other things (like saving himself).

"Damn bloody hell." -Sharps cursing himself for missing a shot or not being careful.

"You might want to get out of here before I change my mind." -Sharps sparing someones life.

"It's all in a day's work" -Sharps after finishing a job.

Retrieved from "https://sonicfanon.fandom.com/wiki/Sharps_the_Hitman?oldid=1800068"
Community content is available under CC-BY-SA unless otherwise noted.