Before Metal Sonic was created, Robotnik built Silver Sonic at the Death Egg station, but he was defeated by Sonic.After the events of Sonic CD, he built a new version of Silver Sonic, called Mecha Sonic.

Metal Sonic was built on the Little Planet to defeat Sonic in the race, but he lost the race and was muted.

After the Events of Sonic Adventure

After the events of Sonic Adventure, Eggman found Metal Sonic in the capsule and rebuilt him.Sonic and Tails, they were sent to the Volcanic Island to fight Metal Sonic who gained the ability to speak. When he recalled the moments he did badly, he sacrificed himself and was burnt in the lava.

Eggman, he also found the old parts of Metal Sonic and rebuilt creating a new model. As Shard the Metal Sonic once was evil and serves Eggman. Metallic Son 3.0 rebelled against his master, but he himself rebelled to rule the Eggman Empire that changed to the Metal Sonic Empire. Unfortunately as Shard once did, he could not speak, and only when he changed forme. One thing that differentiates the two models is that he can change the form, which is opposite to the official. His form is: Neo Metal Sonic, Super Neo Metal Sonic, Metal Madness and Metal Overlord. 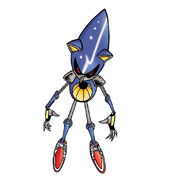 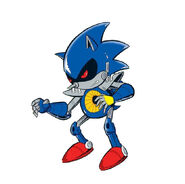 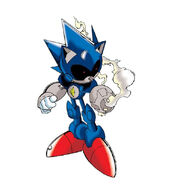 Shard the Metal Sonic
Add a photo to this gallery
Retrieved from "https://sonicfanon.fandom.com/wiki/Shard_the_Metal_Sonic_(New_Universe)?oldid=1839589"
Community content is available under CC-BY-SA unless otherwise noted.