the Shard Empire is one of three main Empires on Delphonus, they are made of two separate Species: the Titutan, and the Rexsauro Species.

the Titutan are the Main Species of the Shard Empire, they are Native to the Planet Delphonus. the Original species, the hermit was a small carnivore cell, that was found in the oceans of Delphonus, after being brought to the planet by an incoming Meteor. as time passed, the Hermit evolved, into a large predator like creature, they became known as the Titutan after obtaining a second pair of arms. as more time passed, they went through Tribalization, Civilization, then launching its first Spaceship. as years past, the Shard Empire enjoyed a peaceful time, as no army could defeat them, no arguement could never be solved.

the Rexsauro and Titutan race's are normally considered as one species, as they seem quite Identical. there are aomw offspring being a crossbreed between a Titutan and a Rexsauro. it is believed that the Rexsauro and Titutan Species are both the same race of beings, just that the meteor that stuck Delphonus millions of years ago, was only part of the main meteor, in which another fragment landed on a different planet, which later became the Resauro species, however, this is only a belief.

the Empire's Military, Economy, and Religion

The Shard Empire is known for its powerful Military, as it is able to completely destroy a city within a few minutes.

The Shard Empire are well known for being Legal Spice Traders, as they control several hundred planets, they are even traders of Pink and Purple Spice, extremely rare types of Spices.

while the Shard Empire is not exactly a Religious Empire, they have no Specific Religion, allowing Individuals to choose their own Religion's, as freedom many Race's do not get to experience. 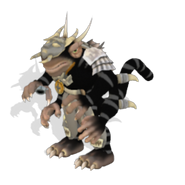 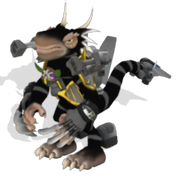 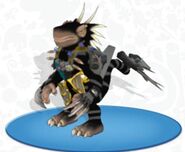 Captain Rexsauro, a well known Individual of the Rexsauro Species
Add a photo to this gallery
Retrieved from "https://sonicfanon.fandom.com/wiki/Shard_Empire?oldid=178589"
Community content is available under CC-BY-SA unless otherwise noted.